The future of the old Leslie Junior High School building looks to be more than a little uncertain just now.

The charter school will be moving out, and South Salem High School will expand into it the following year, but more change might be on the horizon.

A reader who attended one of the meetings about the May 2018 proposed bond measure reports that its demolition and replacement with new construction might be on the menu.

The District's published materials are less specific and a little vague. In the section on South Salem High School, they discuss "demolition and replacement of the oldest section of the facility," which offers a little wiggle room, but seems to point to the old Leslie complex.

The reader wondered how seriously adaptive reuse and remodel of the old building had been seriously investigated, or if the bond committee had moved too quickly to land on "demolish" as the most convenient solution.

The building may not be a major architectural landmark for style, but it is at least of minor historical interest, and has a significant place in Salem's urban development as it moved south. 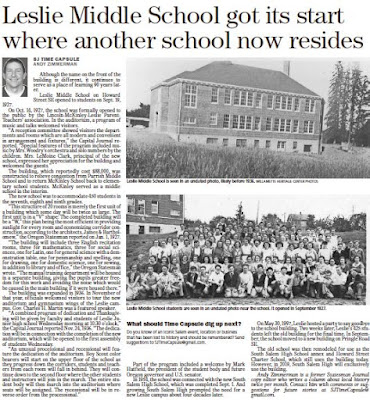 Previously, in a note here about the school's architect Lyle Bartholomew the building was dated to 1937, but a recent history piece in the paper suggests an earlier and more piecemeal timeline.


“This structure of 20 rooms is merely the first unit of a building which some day will be twice as large. The first unit is in a “V” shape: The completed building will be a “W,” this plan being the most efficient in providing sunlight for every room and economizing corridor construction, according to the architects, James & Bartholomew,” the Oregon Statesman reported on Jan. 1, 1927.

In fact there were two wings completed a decade apart, the second wing dedicated on the day before Thanksgiving, 1936.

At the meeting school representatives also talked about taking out the swimming pool and replacing it with parking.

That just seems wrong in so many ways.

First off, the schools should not be subsidizing parking and driving! Especially for kids.

On the contrary, the District should be investing in facilities to support walking, biking, and Cherriots. In HB 2017 the State allocated new money to Safe Routes to School projects, and the District ought to be matching that with their own planning and resources. There remains a disconnect here.

Second, it's a magnificent failure of the imagination that we can't find a workable public use for a swimming pool, one moreover that is a meaningful legacy of the New Deal here in Salem. What a wonderful expression of "public works" that was, and how timid our refusal to reinvest in it.

Relative to recent institutional demolitions like Howard Hall at the Blind School and Le Breton Cottage at Fairview, saving the old Leslie seems less urgent. It is not the single remaining example of a type or of an institution. So the threshold to say "we really should save it," seems like it should be higher than on those other two buildings. The pool, however, might merit a lower threshold, as it is the single remaining instance of a type.

In the end, maybe it truly is impossible to fund the rehabilitation and reuse of the school and pool, but appears on the surface that we move too quickly to the convenience of demolition in order to favor the shiny and new - or, in the case of a new parking lot, the sticky and matte black of asphalt.

We haven't been following the bond closely here, but if you are following it, and especially if you have kids in the schools, there are probably other interesting questions about the proposed bond, particularly whether it now works synergistically with the new Safe Routes funding and goals for Physical Education and activity.

The remaining meetings on it are:
Postscript, April 19th, 2020

The Pandemic brought Ron Cooper out of retirement, and he's contributing to Salem Reporter. He shot some scenes of the demolition.

Here, there's a note on "mitigation" at a meeting of the Historic Landmarks Commission, and a brief note on an appeal at City Council on it.

And here's another piece in the paper. I don't think there's anything much new in it. 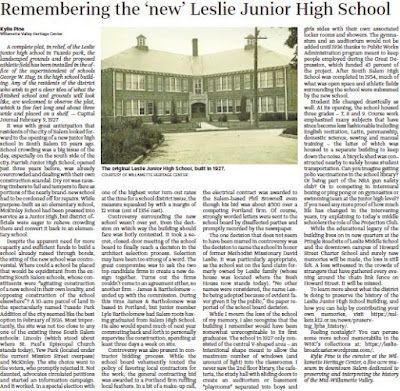 When I was on the Salem-Keizer School District Budget Committee back in the 1980s, I toured the building with the Facilities Director. The question was whether to spend more on updating the building or scraping it. A big fight resulted in the community and it was put off with a few changes to the use of the building.

Here were the issues then....asbestos, lathe and plaster that is very hard to repair, narrow stairways with no way to widen them, no way to escape the classrooms in the basement other than the stairways (Fire Marshal declared illegal), corroded pipes, substandard wiring, substandard pipes, no way to get gas to the second floor for chemistry classes, heating system that had exposed pipes that allowed student to get burned and the building was unreinforced bricks that would collapse in a mild earthquake.

So, eventually the School District built a new Leslie Middle School and allowed the building to be used by Howard Street Charter School. They limited the uses of a lot of the rooms. This was after trying to do some renovations and finding more problems with every effort to do anything to the building.

As much as we love the school, it is not safe for people to be in. It is too expensive to repair and will be a drain on precious resources, if kept.

That said, it sure would be nice to see pools added back to our schools.

Yes, the old Leslie is slated for demolition.

They also propose to pave over the pool site for more parking.

No enhancement for walking, biking, or Cherriots appears to be in the works.

Added some notes on the demolition.

Added another clip from the paper