Our Area Commission on Transportation as well as the State Bike-Ped Committee meet on Thursday, and there are perhaps a couple of things to note in passing.

Planning for the 2021-24 funding cycle continues and at the last Oregon Transportation Commission meeting, they appeared to be heading towards allocating a little less to "fix it first," like the Legislature said to do, and a little more to widening and "enhancement":


While public opinion and the Commission’s policies favor focusing on maintenance, increased congestion in the Portland metro region is negatively impacting freight mobility and the economy of the whole state, pushing toward additional investments in congestion relief. Due to increased congestion, the Legislature directed $672 million in HB 2017 toward specific enhance projects in the 2021-2024 STIP, and the Commission asked ODOT for options to direct additional resources to addressing congestion.

In response, ODOT unveiled a variation on a scenario called “Scenario 2+” that held maintenance funding steady while directing additional money to congestion relief—contingent on receiving federal funding above the level in ODOT’s conservative financial projection. “Scenario 2+ directs the first $40 million in additional federal funding into a Strategic Investment Program that may be used on highway enhancement opportunities chosen by the Commission,” said Travis Brouwer, ODOT’s Assistant Director. This strategy is similar to the $50 million the Commission set aside for strategic investments in the 2018-2021 STIP. The Commission can choose to use it for congestion relief projects or for federal grant leveraging opportunities.

There's just a consistent belief that the only way to engage congestion is by widening and increasing capacity. It's still not sinking in that we need to think about the mobility of people who can choose - should choose sometimes - other than drive-alone trips and to reduce the total amount of driving.

California is making one important regulatory change that will help with this. It is likely that Oregon will get there also - but only after much kicking and screaming.

The ACT also has got a formal comment to ODOT on a draft Communications Plan:


Ironically, this practice of ODOT developing a plan and not providing sufficient time for ACTs to review is just the type of problem the Communication Plan hopes to correct!...There are MWACT members that have shared their frustrations that ODOT is not so much asking for input as much as giving presentations to the MWACT in order to "check a box" that they are engaging with the ACTs.

At the same time, some plans seem hopelessly drawn out with comment periods so that entrenched interests have extra time to derail or dilute them.

I'm not sure this is a 100% consistent problem. It may vary in interesting ways with whose comment ODOT seeks to steamroll or to solicit. That is, there is always a politics involved with how much or how little to involve the public and other agencies.

Anyway, there's a little bit of jockeying going on. At the last meeting in October,


Marion County Commissioner Kevin Cameron asked if MWACT members feel that there is a disconnect between the ACTs and the Oregon State Legislature. Chair Ken Woods confirmed that MWACT members feel disconnected to lawmakers. It was noted that there needs to be a strategy to get Legislators to listen to the ACTs and utlize their regional expertise.

The ACTs are a creation of the State, the MPOs are a creation of the Feds, and they overlap a good bit, but don't always have the same interests. They certainly have to respond to different regulatory environments. The ACTs also seem more weighted towards rural and county interests. It is "regional expertise" or "pet projects" and pork that the Legislature isn't sufficiently honoring? All these layers may add the benefit of "checks and balances" but they also create a strong inertia for the status quo and hinder movement to adapt to the exigencies especially of climate disruption. 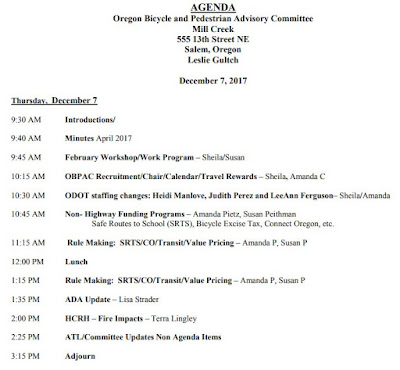 They'll be getting updates on new active transportation staffing, funding programming, ADA compliance, and on the formal rule-making projects for Safe Routes to Schools and on decongestion pricing for the Portland area. It doesn't look like any decisions or big action items, but lots of percolating new things to report on.