Council meets for the last time in 2017 on Monday, and while I was expecting a sleepy agenda, it's surprisingly packed with interesting bits.

Not probably the most important, but maybe the most illuminating here, there's a discussion of Fisher Road NE. It offers a good entry into the ways that prevailing engineering standards are totally misguided.

The 85th-percentile speed is used to determine the speed at which a “reasonable” driver is comfortable traveling. This speed is used by the Oregon Department of Transportation for setting the speed limit of a road. A traffic speed count was conducted on Fisher Road NE south of Empress Way NE. The 85th-percentile speed in this posted 25 mph zone was 33.2 mph southbound and 33.9 mph northbound.

a. This 85th-percentile speed indicates speeding is an issue. The City could use this information to request a higher speed limit, but staff do not recommend changing the speed limit.

I just want to draw your attention to this logical chain:
That right there in a nutshell is how utterly effed up is our approach to design speed, posted speed, and 85th percentile speed.

If speeding and safety is an issue, the proper response is a suite of actions, both in posted speed and in road design and engineering, to reduce speed.

But nope. The current engineering dogma is that we should keep raising posted speed until it coincides with actual user speeds. It rewards speeding!

As a matter of philosophy and general approach, this is a very great ingredient in why we keep killing people on our roads. (And why the Pedestrian Safety Study whiffed and missed.)

Update and addendum - In a comment Jim rightly points out that the Staff Recommendation is for some mitigation:

These seemed band-aid-y and temporary, and inconsistent with the thrust of 85th percentile analysis. But as he suggests, it was misleading to omit them entirely. See the comment thread for more on that. 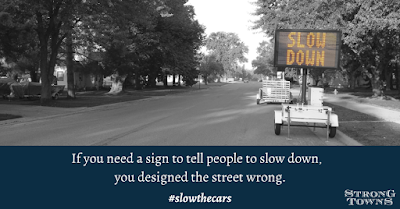 The Natural Hazards Mitigation Plan also deserves more attention and discussion than it will likely get. It's a little buried here.

It also seems like it should have been better integrated into the Strategic Plan the City just adopted, as many of the Hazards Mitigation projects are very important and deserve to shape near- and medium-term policy and actions. Funding them will require trade-offs, and we aren't doing a good job right now of making these trade-offs explicit and making informed choices about them. (The chief one in mind here is: If we spend a billion dollars on a giant new bridge and highway, what other projects will we have to omit? The Hospital is surrounded by small bridges over the creeks, for example. Many of these smaller bridges will still need retrofits or replacement!)

Oregon Fruit looks to be on the move!

The Urban Renewal Agency will consider a request for $300,000 to support a move from the facility on Edgewater and Patterson, and adjacent to the Second Street/RR right-of-way that could connect with the Union Street Railroad Bridge, to the recently vacated NORPAC facility between Madrona and McGilchrist.

The Staff Report says the business was also considering a couple of Portland sites for a move. So maybe they are playing the City a little bit for leverage. But this is the kind of agricultural, value-added business that is in Salem's sweet spot, it keeps it in Salem near the emergent brewery scene, who are also customers now for Oregon Fruit's new product line, and it frees up the old site in West Salem for redevelopment.

It's hard to criticize this. Maybe you or someone will find a substantive reason to complain, but on the surface it seems like this is the right kind of use for urban renewal subsidy.

Also interesting: STREC is dead. The "Salem Renewable Energy and Technology Center" was not itself a "sustainable" concept and apparently there is not sufficient demand for its land under the focus on renewables. The City wants to rename the project as "Salem Business Campus" and "remove all references to renewable energy use and technology use."

So is this now a bait-and-switch? There's a bad taste on this one.

Another thing that maybe is a little unclear is the proposal for "a Nonprofit Corporation Low Income Housing tax exemption." It looks like that should be an incentive for new housing, but it appears to be instead some kind of pork offered to the owners of existing buildings. A quick look at it didn't really make clear what true policy problem it was addressing. Maybe you will understand it better.

Finally, two matters already noted last week:
And you might find items on Public Records Policy, appointments to Boards and Commissions, the property transfer on parks and school grounds, bidding on the Police Station contracts also of interest. There's quite a bit for the end of year!
Posted by Salem Breakfast on Bikes at 12:01 PM

The most disappointing thing about Fisher Road is that the City plans to develop a connecting road between Market Street and Fisher Road soon. This will allow traffic to go from the entrance of Fred Meyer to Fisher, including large delivery trucks.

This addition could add even more vehicles to Fisher Road that will not be ready to receive it. No sidewalks for the most part, too many speeding cars and basically a residential area.

Thank you for your previews of the Salem City Council meetings. Very informative!

But ... I thought I read in the Council packet that City staff was going to put two four-way stops on Fisher Road and install a speed tracking sign. To read your post it sounds like they plan to do nothing. Am I missing something?

I wanted to talk more about process and analysis than about outcome. The solution here of two stop signs is despite - goes against the grain of - the doctrine of 85th percentile speed.

Staff Report says, "The 85th-percentile speed is used to determine the speed at which a “reasonable” driver is comfortable traveling. This speed is used by the Oregon Department of Transportation for setting the speed limit of a road." This is all about what a driver feels, and nothing about what other users of the road might feel. It is an intensely autoist definition of reasonable speed.

I want a more ringing endorsement of the problem of speed for all users.

But you are right to point out that the emphasis on the near-term is a little misleading, and I will revise it with a note.

"It looks like that should be an incentive for new housing, but it appears to be instead some kind of pork offered to the owners of existing buildings. A quick look at it didn't really make clear what true policy problem it was addressing.

Pork or deepening the subsidy, depending on your bias.

This exemption seeks to increase the viability of CHDOs (Community Housing Development Organizations or "cho-dos.") Salem has only one. It's run by Catholic Community Services Foundation, who took over the properties owned by the Salem-Keizer Community Development Corporation which provided quality housing for families with incomes 50% and 30% below median income, but was under-capitalized, and could not sustain its portfolio. As everyone knows, low-income housing is very much needed in Salem, and it requires subsidies because rents have a ceiling established by HUD. It's just as important to retain low-income housing now, as it is to build new.

A city the size of Salem should have more than one CHDO. Under the US HUD's HOME program, 15 percent of the HOME funds allocated to every PJ (a participating jurisdiction - city, County, multi-jurisdictional consortium, or state) are set aside for projects developed by CHDOs. The 15 percent CHDO set aside is Congress's explicit effort to direct HOME program funds into the hands of nonprofit developers. The exemption would be the City's effort to to deepen the federal subsidy.

Stop signs are NOT traffic calming devices. A number of other engineering solutions have been developed including speed humps, traffic circles, lane narrowing, etc. It's unfortunate that the road engineers continue to opt for the cheap, non-solution. (They do the same thing in Keizer.)