This week the City posted the summary from the Downtown Streetscape Open House.

The link on the City site is busted, however, but it was not difficult to figure out the right directory structure from the other documents that had correct urls. (Update - the link is fixed on the project website now.)

So, for the record, here's the link to "Downtown Salem Streetscape Plan Kickoff Open House Summary."

It's really interesting how broad is the consensus on Court & Liberty as the "heart" of downtown. The Reed Opera House has something to do with that, as the earliest "big" institution downtown around which other things clustered.

Maybe there's a real way to leverage that. That will be an interesting invitation to creativity for the Landscape Architects. 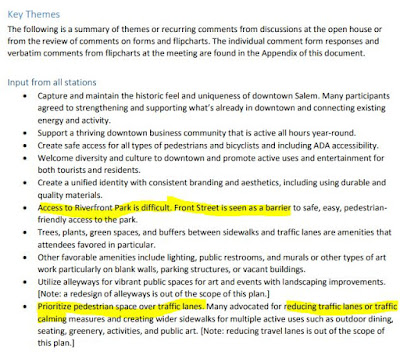 Of course they promptly point out "reducing travel lanes is out of the scope of this plan."

That doesn't mean we should stop mentioning this at every opportunity! Repetition is key to good messaging! The City and downtown merchants should keep hearing this.

The whole summary if 25pp and lists most of the individual comments, so of you are interested in more detail, check it out.

(There's also a video compiled from the Open House, but it's not very informative.)

The next Open House is on February 13th, it looks like. Maybe they'll have some draft concepts to start floating then!

The whole "why is Court & Liberty considered the 'heart'?" is maybe more interesting.

Here are the four blocks centered on Court & Liberty from the 1895 Sanborn Fire map. (The scale in the online pdf is not identical, so the matchline on Court Street between the two sheets is a little off.) All the commercial development then was on Commercial Street (duh!) and State Street. Liberty was much less developed, and our Chinatown was on the east side of Liberty extending to High Street.

So at this time, Court & Liberty would not be considered the "heart" of downtown. State & Commercial, the site of Ladd & Bush Bank, probably was.

Maybe the sense that Court & Liberty is the heart is more informed by the way Court Street and Liberty are both in-bound main roads in our current autoist configuration, and so that's the big crossroads. Additionally, maybe Starbucks as a gathering place on the corner is important, and the status as "heart" has less to do with the Reed.

Maybe more in an "ethnographic" inquiry for why we consider this the "heart" will come out. It's an interesting question in our sidewalk culture!

Addendum 2 - Court & Liberty is also the most intact set of four full corners of "main street" style storefronts. Other intersections are enervated or even desolated by adjacent parking garages, malls, empty lots, surface parking lots, or other mid-century or later development that strayed from the "main street" template.
Posted by Salem Breakfast on Bikes at 12:01 PM

(added another section on Court and Liberty)

They fixed the link finally!

They might have fixed the one link - but they reproduced the exact same error a second time!

They posted the online comments, which don't seem to differ much from the in-person edition, but they used the same /citydocs directory instead of /citydocuments.

Does no one go back to check links after they're posted?

They've also posted a notice for the next Open House on February 13th.