Has Crossing Commercial at Union Street got Easier?

Have you crossed Commercial Street on Union Street with the new light? 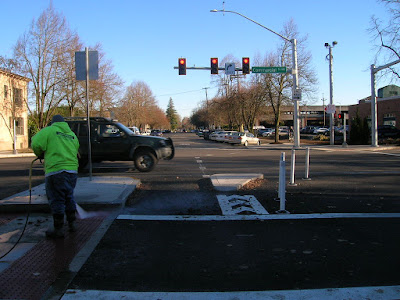 A reader reported trouble last month on Monday the 20th:


This morning east bound on Union I sat at the bike light for two full cycles on the lights at Division and Commercial and Marion and Commercial with no change in the Red east bound light on Union. There were no cars going east or west on Union and no pedestrians using the cross walk. So I on a bike had no way to activate the light. Luckily a city worker and one of the contractors were there, so I stopped to talk. I asked what it takes to activate the intersection on a bike. The city guy said it is not working yet. He said there will be a light to detect bikes and activate the system, but it won't be activated until March. So for now I'll still have to run the red light when it is safe or make my way for the pedestrian plunger confusing everyone involved at the light....The current situation feels more dangerous than no light at all. Oh and in the evening cars traveling south bound on Commercial still block the intersection.

Elsewhere on social media, a person posted the picture above from November 15th, and it definitely showed south-bound cars blocking the intersection. On the left-hand margin, there's a light-colored car directly in front of a bike's through-lane going east.

So that's two data-points and evidence for some difficulties here.

At the same time, a new light deserves some "training" time, time for the City to dial in the cycles on the programming side, time for commuters to get used to the change on the driving side.

It would be odd for video detection to be enabled for cars, but not zones for people on bike.

When I visited it finally, I didn't seem to have any trouble with triggering the green. It seemed to work even when there was no car along side or behind me. I'm not 100% positive that something else didn't trigger the signal, but it didn't leave me feeling it was broken or blind.

But the City said also


A blue light indicator for bicycles traveling across the intersection from west to east was also added.

I don't see that. It looks like there's a mount on top of the left-most signal head for the indicator light, but I couldn't get one to light up, and it seems doubtful it is operational. Hopefully that's the only missing element.

Another oddity is that there are three signal heads, but only two lanes. It seems like there should be one conventional signal head for the right-turn lane onto Commercial, and one bike signal for the bike lane channel in the median.

I'm not sure the execution on this intersection design is tip-top.

What has been your experience?

Autoism and our Asphalt Socialism

The light might be more interesting as sign and symbol, as an occasion for comment, outrage, or praise, and as a tool for policing tribal affiliation, than as functional traffic control device. It's already more than a little meta.

One thing to watch is the way that an ostensibly "libertarian" critique of non-auto travel might be gaining traction and coalescing around the new light as its standard and symbol. We saw some of this critique around "Bike and Walk Salem," the update to the TSP a few years back, and it seems to be enjoying something of a revival. And now it has maybe a little extra juice as a local conspiracy theory, not just the more general "Agenda 21" theory. 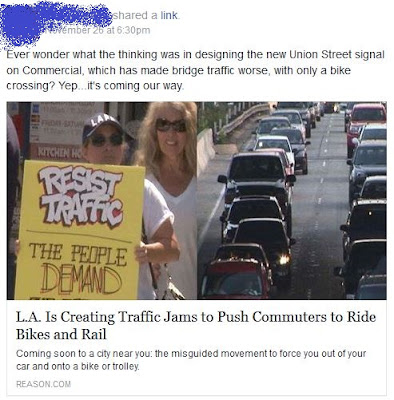 In a comment on a different post critical of the new light it gets a classic formulation:


More ways for Big Government to steal our personal Liberty, and try to force us out of our cars.

The argument isn't authentically libertarian: A real one would dig into auto subsidies - our "asphalt socialism" and free parking and underpriced gas and everything else - and ask about leveling the playing field for real mobility choice. It would discuss decongestion pricing and tolling.

Instead, and more powerfully, what we see is a tribalist argument - with an implied myth of autoist "heritage"! - that denies the ways heavily subsidized autoism impinges upon the "liberty" of those who might like to walk and bike and bus. It also denies the future "liberty" of people who might not like the ways our current greenhouse gas pollution has harmed them and constrained their choices. The argument for autoist monoculture requires a monovalent form of "liberty" and compulsory autoism.*

This screen for autoism will be a popular argument.

But that's not the public policy we have right now, and it's not the policy we should have. Ostensibly we have a commitment to "decrease reliance on the SOV."

This requires more than fiddling on the edges of things.

The new City Task Force may run into a wall here. It accepts the idea that we have to increase auto capacity, and this has always been a flaw in much criticism of the Salem River Crossing. If you accept the goal of free-flowing auto traffic, you are stuck with quantitative arguments, that the SRC is too expensive, but we should make smaller investments in reducing congestion. It accepts the rightness of the SRC as a solution, just says that it is too big and expensive.

If you really prioritize the flow of automobiles at the bridgeheads, the new light at Union and Commercial may not support this priority.

So will the City continue to support this light while we wait a few years for the rest of the Union Street bikeway's construction? And wait even longer for a solution to crossing Wallace Road at the west end of the railroad path or nearby? If the City is genuine about supporting this corridor as a legitimate way to cross the river, the Union Street RR Bridgeheads also need to function for people biking, and right now they still don't.

The City should have done bike counts through the intersection this summer so that they could do a comparison next summer and have a baseline for activity as pieces of the Union Street bikeway are completed.

I worry that the light here will attract criticism and outrage, much more so than the new bike lanes on Church and High Street, and that the City won't stand behind it.

* Remember the piece in The Onion on reducing bike crashes?


“Our data confirm that the vast majority of cyclist injuries can be avoided simply by driving an automobile instead of biking around like some weirdo,” said lead researcher Dr. Laura Gafferty....“Regular people drive cars because it’s the normal and not the abnormal thing to do. If every cyclist purchased and operated a car like you’re supposed to as an adult, bike fatalities would drop an estimated 40 percent within six months alone.”

In that very first quoted story, there was no mention of the traffic on Commercial. I assume there was plenty of traffic, otherwise the fact that we are a "dead red" state would have meant the problem was moot.

Oh, and that bike detector at Madronna and 25th...I didn't know it was there, but how peachy you can make a run for 25th right before the bike lane runs out. I've ridden 25th: such great fun riding with 45mph traffic. I hope they put in a dedicated path next to that monstrosity, but I seem to remember the plans were only adding a sidewalk to the east side.

The city would like to build a dedicated (and separated) bike path on 25th, on its east side (next to the airport). The space is there and it makes a lot of sense. Also, the new state transportation bill has funding set aside for off-system trails, especially ones targeted at urban commuting.