Article on Driving in Rain Slips on Speed

We're in the holiday doldrums, a between time when there isn't always something interesting to say. 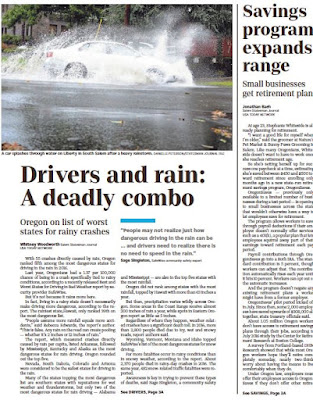 A funny press release made for a front-page article today about the dangers of driving in the rain.


With 55 crashes directly caused by rain, Oregon ranked fifth among the most dangerous states for driving in the rain in 2016. 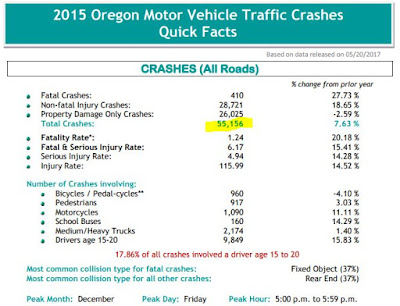 The total number of reported crashes for 2016 wasn't immediately at hand, but the number for 2015 is 55,156. This will give us an order-of-magnitude comparison.

That's one-thousandth of the crashes directly caused by rain, a tenth of 1%!

It's hard to think of any analytical framework that would conclude rain itself is a pressing matter for systemic road safety efforts above and beyond our existing standards for stormwater drainage.

Portland recently broke out factors in fatal crashes in an interactive.

Drugs and alcohol are a leading factor, of course.

But we should distinguish more between driver impairment, as they are the ones who employ lethal force, and walking impairment. A moralizing, neo-Temperance perspective on walking is dumb. We should want a road system that supports the safe choice of impaired walking, as the judgement and reaction time of a slightly intoxicated person on foot is not very different from the judgement of a child or an elderly person. To stigmatize and victim-blame low levels of impaired walking is to reinforce systems and standards that do not support walking for all ages.

So the more interesting factor is speed. Nearly all fatalities occurred on roads posted for 30mph or more. Speed is what kills.

And the Basic Rule (ORS 811.100) could stand a reinterpretation to encourage and even require driving at speeds far below those posted in rainy conditions, and even just the ordinary urban environment.


A person commits the offense of violating the basic speed rule if the person drives a vehicle upon a highway at a speed greater than is reasonable and prudent, having due regard to all of the following:
(a) The traffic.
(b) The surface and width of the highway.
(c) The hazard at intersections.
(d) Weather.
(e) Visibility.
(f) Any other conditions then existing.

"Reasonable and prudent" (as well as our whole approach to posted speeds) needs a major revision in interpretation as we consider programs like Vision Zero and "Twenty is Plenty."

Whether it's distracted driving or rain, our discussion of driving elides the centrally lethal factor of speed. Driving even at lawful speeds is too often dangerous, and until we grapple more seriously with this, we're just going to be fiddling with edge cases and "bad drivers" and not doing what we need to do to make the total transportation system safer.
Posted by Salem Breakfast on Bikes at 12:01 PM

Was there an article from PBOT associated with the graphic? If so, could you post the link to the article (I tried, but navigating their site isn't always the easiest). Thanks.

There might be an associated article, but it has not been easy to find - as you found! If I find one, I will post it here, but a few passes at it has not turned one up. Here is the source tweet. They do not seem to have posted anything further about it.