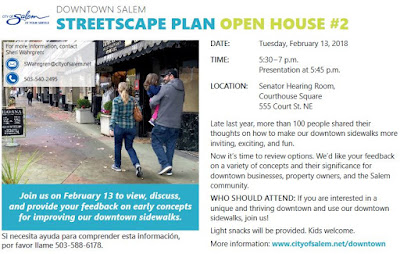 The second Open House for the Downtown Streetscape project starts tomorrow, Tuesday the 13th, at 5:30pm.

The project team hasn't published any new materials, so there's not much to say yet - other than to continue to push the City for changes to carspace. Until we grapple with the disproportion and zoominess of carspace downtown, our fiddling with the sidewalks will be cosmetic, principally rearranging the deck chairs. This may yield incremental improvement, but it will not yield the enduring, structural change we need.

The Open House will be in the Senator Hearing Room/Courthouse Square, 555 Court St. NE from 5:30pm to 7pm.

At the same time, in a nice bit of concurrent scheduling, Cherriots has scheduled their first Open House for what they are calling "A Better Cherriots." They'll be next door at the Downtown Transit Center in the Customer Service area from 6pm to 8pm on Tuesday the 13th. That's just around the corner at 220 High Street NE. It makes great sense to double-up and hit both of them. (Facebook event here.)

They've got a series of other Open Houses and less formal tabling scheduled all around the city through the rest of the month in into March. You can see the full list here.

Related to the Creekside and Lone Oak Reimbursement District conversations (see also Salem Weekly this issue), a reader sent in some material from old debates about paying for new growth. One of the memos is from 1990, background on an "Urban Growth Management (UGM) Plan" (this is not published to the City website as far as I know):


The land that developers select is not always the most cost effective for a community to serve.

The City Council, in 1979, was faced with these same pressures of new development. In an effort to balance public spending programs for infrastructure to serve new development and at the same time satisfy current ratepayers' and taxpayers' needs for maintaining the present city water, sewer and street systems, the Council adopted the UGM plan.

New development, outside the Current Developed Area (the area of contiguous development) was to pay its own way. The City would do some new water and sewer line extensions to serve new growth by relying on a proposed 1% Real Estate Transfer Tax. The money collected from the tax was to be used solely to help serve new growth. By itself it would not be enough, but with the UGM plna, it was felt it would help a lot. The tax was presented to the public for a vote in 1980 and was defeated soundly....

To again attempt to speak to the funding problem of serving new growth, the Council, in May of 1982, approved a construction tax/development fee (CDF) to be levied on new development. The collected funds would then be used to provide infrastructure extensions to serve new growth....

The development community, led by the Salem Homebuilders, objected to the continued collection of the CDF on the grounds that it was too much and the money didn't get spent where they thought it should have been. In July 1988 the Council terminated the CDF and replaced it with a small systems development charge (SDC) for water and sewer of $600.00 per new home. The new SDC will raise substantially less money for new growth line extensions than did the old CDF or the hoped-for real estate transfer tax.

So, here we are 10 years later; the pace of new development quickens again and we hold only a small sack of coins (the SDC) to speak to major water and sewer line extensions needed to serve new growth.

It is interesting that we used to charge something closer to the real costs to service new development. But only water and sewer is called out here, however, and transportation SDCs may be new since then.

The City's System Development Charge Methodology Committee finally started posting agenda, minutes, and meeting packets here. So there's probably even more interesting things in the old packets - so check them out if you are interested. They met earlier this morning, so this meeting's past, but now you can follow them more closely in the future if you like. It will be interesting to see if the committee can formulate a set of charges that creates incentives for new housing, which we need, and also ensures that new development pays for itself.
Posted by Salem Breakfast on Bikes at 12:01 PM

Thanks! There is more on these projects here: "At the MPO: Vetting Projects for $5 Million Continues" from November and "Brown Road Completion Funds and Start on McGilchrist ROW at the MPO" from just a couple weeks ago.

A more powerful opportunity will be in the early stages for the next Regional Transportation System Plan, which looks to be kicking off at the TAC today. It would be more helpful to have greater public outreach and comment in the early stages of these things rather than at the final stage very near adoption.

Here's more on the early stages of developing that RTSP.

Probably the most important message to give to MPO staff is: STOP WASTING TIME AND MONEY ON THE SALEM RIVER CROSSING.