Tomorrow, Thursday the 23rd, there's an important benefit for the bike facility at Geer Park and a meeting of the Council Congestion Relief Task Force. Cherriots Board met last night and there might be a few things to note also.

If you've been following the bike park at all, you'll have noticed the earth moving last summer, the installation of irrigation equipment and landscaping, and now the beginnings of the transition from brown to green!

It's a donated facility, not something primarily funded by City capital or operating parks funds, and Salem Area Trails Alliance is holding a benefit tomorrow night. They'll be raffling off a nice new bike, among other things.

From the event notice:

Scott's is at 147 Commercial St. SE, just south of State and Commercial.

The Council Congestion Relief Task Force meets also on Friday, first thing in the morning, and there are already reasons to be concerned. The list of City Staff and Other technical support and consultant staff have nearly all been associated with the Salem River Crossing Process. Not just associated, but embedded in it and in the auto-industrial-transportation complex. They are nearly all apologists and advocates for autoism and, at least publicly, subscribe to the primacy of drive-alone trips. Non-auto mobility for them is a fringey thing, an "alternative," not a fundamental kind of mobility. They may say they are "neutral" analysts of a technology, but so far they have publicly not been willing to criticize auto-dependency and capacity increase.

From the list of support staff, it looks like this committee is set up to fail. The support staff is too much "business as usual" and does not contain enough ideological diversity to support healthy debate and real analysis. There is a real risk the end result is ¯\_(ツ)_/¯ and impetus towards a restoration of the SRC process.

So two things to consider:
The inclusion of a PR firm like Cogito also suggests there might be too much emphasis on spin, and not enough on analysis:


Julie excels in managing public involvement projects related to land use and transportation. She creatively guides public and private organizations to clear outcomes. A resident of Oregon since 1987, Julie has a vast network of trusting relationships with a wide variety of advocacy organizations and public agencies. With 25 years in public involvement, land use and transportation planning, Julie understands how to involve diverse interests, facilitate efficient decision-making, interpret local, state, and federal rules and regulations, bridge the gap between technical experts and the public, and deliver a successful product on time and on budget.

What are we actually getting out of that? Council should address in a more forthright way the reasons for the particular composition of the consultant team.

The Board met last night oops! meets tonight, and there are a few things to note.

In the agenda and meeting packet for the February 12 Work Session is the letter Cherriots wrote supporting a major change in the way the Board is selected at the Legislature (here is the letter separately):


The Board supports SB 1536 with the seven-year moratorium [on new funding]. The Board was able to arrive at this position because their number one goal is to ensure that the transit system in Salem-Keizer meets the needs of the community. This bill, as written, contains provisions that will result in some current board members losing their position. This is a compromise the board is willing to accept, solely due to the language in the bill that provides the new board with the same funding options provided to other mass transit districts in Oregon. As such, we believe that the two major provisions of the bill, the governance model change and teh funding mechanism, are intrinsically linked....

This bill would bring the District's board governance and finance structure in line with other urban centers around the state. Both Tri-Met and Lane Transit District have demonstrated success with the model. [link added]

That sounds good, but gee, it will be a bummer to lose local election and control of the board. I don't know criticism of LTD, but there is great criticism of Tri-Met that they have invested too greatly in light-rail and not enough in ordinary bus service and in bus rapid transit. There is a strand of criticism that too much money goes to big, fancy capital projects and indirectly to developer subsidies, and not enough to the basic nuts-and-bolts of regular bus service.

(Here is an extension and intensification of some of that criticism to LTD by an infamous transit foe! Much of the criticism of Tri-Met is not by foes of transit, however; these critics want better transit, which they think has been neglected in favor of expensive, shiny new light rail things. By contrast, here's a recent talk at PSU about transit benefits in Eugene. It may not be worthwhile to compare Salem to Portland very often on transit, but the comparison with Eugene seems apt and at scale.) 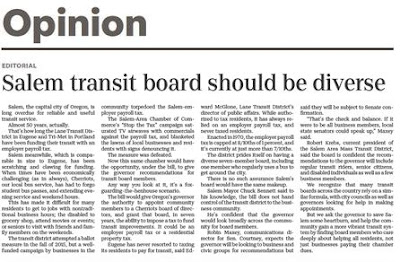 The paper's editorial this week points at this problem.


Salem Mayor Chuck Bennett said to his knowledge, the bill does not hand control of the transit district to the business community.

He’s confident that the governor would look broadly across the community for board members.

So that's something to watch and, truthfully, to be a little wary of.

In the packet for last night's meeting are some other bits of minor interest:

Just want to add a footnote. I couldn't get the Cogito project page to load when I was writing this, but now I got it to load. They worked on the OR-22/Mission Street project, along with DKS. That's a direct feeder project for the SRC and the outcome was to propose ways to increase the firehose of cars on Mission Street.

These are not very hopeful signs.

On the other hand, they worked on a bike parking project for Lane Transit, on the Springfield Main Street Plan (which at one time looked like a super-promising TGM project), and ODOT's Transportation Options Plan.

So maybe it's not just PR.

Anyway, City Staff and Council should address the composition of the technical/consultant support staff.

The City has a Congestion Relief Task Force page up, and they've posted the first presentation.

One slide that might deserve more comment shows average delay of around 15 minutes total. Drivers focus on rare crashes, when delays are sometimes much longer, but the usual rush-hour delay is not all that long. The slides also show the % increase in delay of 250%-300%, but maybe the absolute magnitude of a quarter hour is actually more meaningful.

The official "rules" suggest Cogito staff are "facilitators" only and formally "neutral." Officially anyway they are committee-facing, not public-facing.

There's also a brief survey for gathering ideas from the public.