This is old news now, and maybe even too late as I missed it when it was fresh, but a month ago the City published a second round of information on the Hilfiker Park concepts and asked for comments. That opportunity is gone, but they'll be having another Open House on Wednesday the 28th.

The first round of comments really tended towards the idea of the public space of a park as a quasi-private space and ornamental emptiness. It's true the park is being planned as a "neighborhood park," and not one of the larger "community parks" or "urban parks," City classifications for parks that serve and draw on an area larger than a neighborhood.

But like with on-street parking, there's this creeping proprietary claim to public space for personal use, an extension of one's yard. It's just something to register. 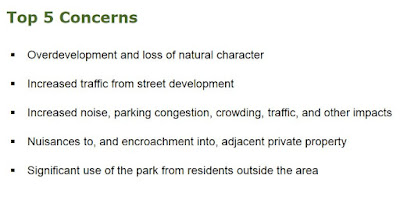 They published three concepts, and one aspect in particular deserves comment.

Two of the three concepts envision the park as a kind of cul-de-sac. On the west, there would be no connection to Hilfiker Lane. These have connections on the north and east only. The potential extension of Sunland Street does not appear to connect on the west to Chaparral Drive or anything else.

Other than the matter of this connection to Hilfiker, I have no opinion about facilities, but the park is part of a large block of undeveloped land. Even in developed neighborhoods, there are few direct connections between Pringle Creek/Battle Creek and Commercial Street. A path helps connect the neighborhoods along Pringle Creek/Battle Creek, including the new neighborhoods at Fairview, to Winco, Trader Joe's, and other significant shopping, commercial, and employment destinations.

The Morningside Neighborhood Plan directly addressed that east-west connectivity. A path connection here is an important transportation connection that has significance outside of the immediate neighborhood. It would serve the greater Morningside area, which encompasses more than one area we would ordinarily call a "neighborhood."

Additionally, there will be fewer eyes and ears on the park in a cul-de-sac configuration, and it will likely be less safe than configuration with access on three sides.

In general there may not be enough talk about the park edges. You may recall some vandalism at Orchard Heights Park a few years back. Regularly in the Morningside Neighborhood Association minutes there are complaints about Clark Creek Park between Ratcliff and Vista. Both Orchard Heights Park and Clark Creek Park are tucked in with abutting yards backing onto the park. There's not a lot of direct street frontage, and so there are hidden pockets in the park where it is easy to conceal activities that one wants to conceal. Fir Crest Park is another one of the isolated neighborhood parks mostly bordered by back yards, and that seems underutilized and potentially harboring unsavory activities.

Just a few blocks south of Clark Creek Park, also in Morningside, South Village Park has full street frontage on two sides, on Ewald and Harris Avenues. It is much more open, without any hidden pockets, and I can't remember ever seeing it mentioned in the Morningside minutes.

So there should be a strong argument for more access and even more street frontage at the park. Even if the park itself is not very highly developed, an east-west connection with Hilfiker Lane should be desired.

For previous notes on the process see here. (Update - see Preferred Alternative below.)

Open Streets Salem is looking for this year's coordinator. It's a part-time contract position from March to October, paying $22/hour. (That's for a contractor with no benefits, etc.) Here also is the Facebook listing.

It is interesting that this is not a City of Salem position. Maybe while we continue to pilot the project that make sense, but it is also disappointing not to see the City fully embrace it in an institutional way. You will recall that the City of Eugene has three City staff working on it (not all full-time, of course). Maybe some of Cherriots staff time should be included in this count. Still, in this way we staff the event, we aren't yet saying that this is an official part of the way we conceive of transportation in Salem. It's this weird social-service-recreational amalgam sponsored by a religious institution. (Skillern, to whom the position reports, is Executive Director of the Salem Leadership Foundation, an explicitly faith-based organization. The North Neighborhood Community Partnership is one of their projects.)

Maybe the SLF sponsorship is actually more effective in engaging people with a soft-sell approach to transportation. We shouldn't rule that out. But it would be nice to see the City think critically about this and how we might assess whether this approach is more effective than making it an official City function. The whole thing is just a little ad hoc.

So if you are interested, consider these things. There is huge upside to making it a success. Tons of opportunity and untapped potential in Salem! The downside may be a lack of institutional support, however. It might reward an entrepreneurial personality more than bureaucratic personality.

If you are interested in this, check it out and take the event to the next level.

And here is the preferred alternative for Hilfiker Park, which includes the path connection on the west. That looks like a solid compromise.

Updated with the "preferred alternative" for Hilfiker Park