At the MPO: Final Adoption of Project List for $5 Million

The Policy Committee for our local Metropolitan Planning Organization meets on Tuesday the 27th, and they'll hold a formal Public Hearing and close the decision on the projects for the $5M in supplemental Federal funds.

Public Hearing on the TIP

On the extra funds and projects, last month the Policy Committee ended up accepting the "Scenario B" recommendation from the Technical Advisory Committee.

This seems to be a pretty firm consensus now around this "Scenerio B," and the vetting process has been a reasonable one, so short of some unanticipated fiasco with big new information, it seems unlikely that the Policy Committee will change the recommendation. Indeed, there is no publicly known reason for the Committee to change recommendation. The lowest-scoring project is out, and there are good reasons it was the lowest-scoring!

Notwithstanding appearances in a "Public Hearing," the real opportunity for public comment was much earlier in the process, particularly last fall when they first published the "interactive map," and even earlier when local governments were first making project applications. It's really rubber-stamping at this point.

Looking forward, it will be more useful to focus comment on the Regional Transportation System Plan for 2019 that is just now starting to be written.

Previously on the project selection (and more details on individual projects):
Looking towards the 2019 RTSP

Most of the work now for the next iteration of the Regional Transportation System Plan is data collection, boilerplate, regulatory compliance, stuff that's not very interesting. But the official timeline perks up for us this summer. In July the MPO formally solicits lists of new projects from local governments.

So if we want to shape future projects more effectively than commenting at a Public Hearing at the very end of a process, now is the time to start shaping local priorities!

There's an update on the rule-making process at the DLCD, and it does not at all seem likely our area would opt for anything involving measurements of miles traveled or of greenhouse gases.

If "jurisdictions must work together if they choose reductions in VMT per capita or reduction in GHG emissions," that kind of cooperation simply seems impossible just now in the Salem-Keizer area. Marion County alone wants nothing to do with it, and several other jurisdictions range from hesitant to resistant. Since "consensus" and unanimity is necessary at the MPO, we'll be stuck with indirect measures like miles of bike lane and sidewalk, and things like that.


Still being discussed by the RAC and DLCD staff is a proposal by a RAC member for required reporting of estimated and projected GHG emissions. DLCD staff had stated at prior meetings that reporting of GHG is on a voluntary basis.

"Required" reporting seems highly unlikely, but gee that would be great if that could happen! There is no way right now that SKATS is going to undertake any level of voluntary greenhouse gas reporting or assessment. They've made it crystal clear they will only do as much as they are forced to do.

In the meeting packet, the minutes from last month show dogged recalcitrance and evasion of fact on the Salem River Crossing.

The willful denial of fact, and of politics at Salem City Council, at this point is so strong that the only solution is to change the composition of the MPO's Policy Committee. They are operating autonomously in some domain of "truthiness," not truth, and in denial.

There was also the first published acknowledgement at the City or MPO level of the recent loss of rapid flashing beacons for enhanced crosswalks. It looks like a different configuration of "yellow flashing lights" is still permitted, and it may be that we users of the crosswalks will notice no functional difference in the technology. So that's a hopeful sign.


You can download the agenda and meeting packet here.

A reader sends along this very interesting letter, dated February 21st, from the Mayor to SKATS. 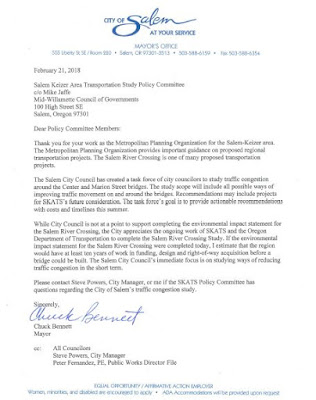 In it the Mayor writes:


The Salem City Council has created a task force of city councilors to study traffic congestion around the Center and Marion Street bridges....The task force's goal is to provide actionable recommendations with costs and timelines this summer....

...City Council is not at a point to support completing the environmental impact statement for the Salem River Crossing....The Salem City Council's immediate focus is on studying ways of reducing traffic congestion in the short term.[italics added]

The letter stops short of saying "stop working on the final EIS," but it clearly contrasts and is in tension with Councilor Lewis's statement that "the EIS will remain on track."

Right now advocates for the bridge, including SKATS and ODOT, are exploiting ways that the draft EIS can be fully written and "complete" in that sense without also being adopted and formally approved. It will be ready and waiting for a theoretical future Salem City Council that is more interested in it.

Significantly, the letter was not included in the meeting packet - although the packet was probably first assembled before the 21st, and it is possible it will be a late add to the meeting.
Posted by Salem Breakfast on Bikes at 2:30 PM

Added a postscript with a letter to SKATS from City Council


The SKATS Policy Committee (PC) packet was assembled and sent out on the 20th of February.
The letter from the Mayor of Salem will be distributed at the PC meeting tomorrow.

At the risk of violating your rule about "people" I would say that the City's official representative to SKATS would do well to represent the policies and views of the Council rather than pushing his own agenda. If he cannot do this, the Mayor should replace him with someone who can. SKATS needs to operate on the best information it can obtain and not be misled about what the future holds. From where I sit, the soonest that the SRC EIS could get back "on track" would be in 2021. It doesn't appear, as of today, that Councilors Andersen and Hoy will have any serious opposition in their reelection to the Council this year. The other three Councilors who oppose the SRC plan (Cook, Kaser, Ausec) will be in their seats until at least the end of 2020. By 2021 most of the analysis and data included in the SRC EIS will be half a decade old, or more. Surely by then it will be too late to submit it to the Federal Highway Administration for a Record of Decision.

Safe Routes added commentary and their letter in support of projects here.

In particular, they underlined that the Center Street project has not been thought-through quite enough:

"We requested adding sidewalks and bike lanes to the south side of Center St. Budget constraints won’t currently allow for sidewalks on the south side, but have been included in the project design and will be completed when further funding becomes available."

It's not just budget constraints, however; it's also that they are planning for a 5 auto travel lane cross section, and sidewalks on a 3-lane configuration would be in the way on that south side. The project is currently still shaped too much by future projections for auto capacity.