At the MPO: Starting Work on the next Regional Transportation System Plan

The Technical Advisory Committee for our local Metropolitan Planning Organization meets early this afternoon today. There is no important action item on the agenda, but some things to note in passing are a little interesting. Work on the SRC continues despite Council's lack of interest, and there's a new cycle for the Regional Transportation System Plan just kicking off.

In the minutes from last month there is this on the work plan and SRC:


Bob Cortright was present, provided a handout, and spoke re: the River Crossing EIS being ‘on hold’ due to land use appeal and the 2018 deliverable of a Final EIS is not possible at this time. He asked that the language in the UPWP [the work plan] accurately reflect the status of the Salem River Crossing with regard to the land use appeal, and the unlikely completion of the EIS. He also mentioned that the city Salem appointed a task force to consider alternatives to bridge congestion. TAC discussion included how/if the task force should it be reflected in the UPWP and the status and anticipated completion of the EIS. Julie Warncke explained that the task force has started and probably will be done during Summer 2018. It is probably okay to include info re: task force as background, but it will be finished by start of UPWP. The RTSP will likely reflect suggestions that come from the task force work as part of the regional transportation solutions. Angela Carnahan suggested adding language to include mention of the appeal and its possible affect on the schedule – and that its not under the control of SKATS. Dan Fricke indicated that ODOT is working on the EIS but technically not able to publish it until the land use issues are decided. Mike will update the language regarding the deliverables in the UPWP. [italics added]

Here's some latest draft of language from the Work Plan:

I guess on a technicality it says "work...should be concluded in 2018" and does not say the final EIS will be published in 2018. This still seems dodgy and disingenuous.

And from another section of the current draft of the Work Plan:

Basically, in bureaucratic rhetoric, this says "la-la-la! I can't hear you! I'm not listening. I'm going to keep doing what I want to do. la-la-la!"

It's rude to say that, but isn't that really what it is? Even cloaked by polite and abstract rhetoric, it's essentially defiant and dismissive, a kind of passive-aggressive persistence on the SRC.

Last night at Council, a minor matter was the Mayor's City Council committee assignments. Councilor Lewis will remain as the City's member of SKATS. As outside of his interest in the Salem River Crossing, Councilor Lewis has not shown much interest in transportation more generally, and this seems like an unfortunate posting. Or, rather, maybe it's a way to ensure that the MPO is not responsive to current conditions on the Salem River Crossing and does not work towards any kind of course correction on urban transportation issues. With the Council's change in feeling on the SRC, the Mayor might have seen benefit in a different voice on the MPO's committee, but he did not apparently.

So here's a plug we don't normally make here. (No extra politicking the comments, please!) The way to force a change in the composition of our MPO's Policy Committee is to elect a replacement for Councilor Lewis in Ward 8. (And, by the way, aren't these the best lawn signs?! From Councilor Andersen's bicycle to Councilor Cook's garden seedling, each one employs a very simple icon that says something very authentic about the candidate. They aren't at all slick, and they read very sincerely and legibly. Nicely done!)

Back to the MPO, they will also begin work on the 2019 Regional Transportation System Plan.

It's a big project, but yet because the RTSP is largely a compilation and a coordinating document, fed by projects and priorities from the cities of Salem, Keizer, and Turner, as well as Polk and Marion Counties, and also Cherriots, at the MPO itself it is not something that drives or sets policy. It has seemed that if we want to change the RTSP, we have to change the City of Salem's priorities.

Though there are limits - like with the SRC we've just been talking about. The City's policy now is to retreat from and put on hold the SRC, but the MPO is like "full steam ahead!"

So the MPO's responsive - until it's not. This is hard to understand, and maybe the best thing to say is that it's not in fact coherent. 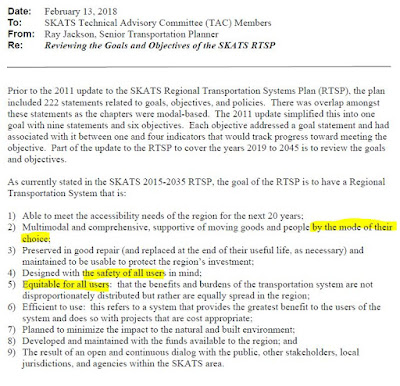 In any case one of the first parts of developing the 2019 RTSP will be a "review" of the "goals and objectives."

Some of them seem like they could do with some revision. For example, goal #2 is that we are able to move "people by the mode of their choice."

We are very far from attaining this goal, and it would be nice to see more recognition of our compulsory autoism and a greater commitment at the MPO to trying harder to abate it. Digging in on the SRC takes resources away from other projects that might actually be more useful, for example.

Staff from the MPO


will also be at the Cherriots Open Houses this month to talk about the proposed projects to be added to the SKATS FY 2018-2023 Transportation Improvement Program.

That project list is pretty well baked, and truly there are limits to how much effective public comment is possible.

Instead, if you go to the Cherriots Open Houses you might consider using the comment opportunity to say something about these goals and about the future shape of the 2019 RTSP. Tell MPO staff when the are formulating the 2019 RTSP they should:
You might think of other things. The point is that the project list for the "FY 2018-2023 Transportation Improvement Program" is essentially done and that there is no real opportunity to influence it. The real opportunity to shape policy and influence project selection is in the next funding cycle, not the one we are currently wrapping up. (The RTSP doesn't actually allocate funds, that's more the job of the TIP, but geeze, who can keep all these acronyms straight? The important thing is that comment at the beginning of a new RTSP process is more powerful than comment at the end of a current TIP process.)

The fact that ODOT continues to work on Salem River Crossing FEIS even after the LUBA decision essentially killed it is outrageous. The money that is being wasted is never talked about at SKATS or elsewhere. As of the end of October of last year the total spent on SRC consultants was $8,023,620. From June to the end of October, nearly $100,000 was spent on consultants. Not only did ODOT fail to put the work on hold pending the LUBA decision, they appear to have kept spending after the LUBA decision. I guess they think $100K is budget dust, but most taxpayers would disagree. What good is accomplished by completing the EIS when there will never be a Record of Decision? The composition of the Salem City Council will not change until 2020 at the soonest (it appears that both Tom Andersen and Chris Hoy will retain their seats this year and the other three anti-Bridge councilors will hold their seats until 2020). By 2020 the "sell by" date of the EIS will be long expired.