Portland to Eugene Passenger Rail DEIS is Out! Open House in December

Did you see the piece on a funny episode of train nostalgia in 1955?

Though it not yet easy to see a path to funding, the project to improve passenger rail between Eugene and Portland is one more step along.

This month they published the draft Environmental Impact Statement, and will hold an open house on December 5th at Pringle Hall on Church Street behind the Hospital at 5pm.


Mostly things seem unchanged since 2014 when we learned about the preferred alternative. 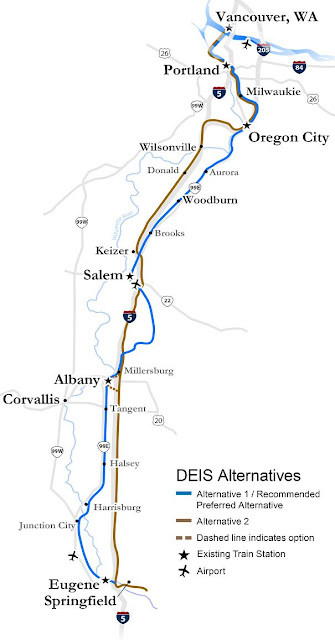 The recommendation is to use the existing Union Pacific line and to improve it, perhaps adding a second set of tracks in some places where the current single track creates bottlenecks.

The other build alternative is to lay new tracks along I-5. This would be about four times more expensive, could not be staged incrementally, and would also be more remote from important city centers. Think about a train depot at the Market or Mission Street interchanges.

One of the rejected alternatives would have used that Oregon Electric line, but because it missed the station and transit hub at Albany, traveled through Ankeny Wildlife Refuge and by known landslide hazards, and would disrupt the Highland Neighborhood with additional trains, it failed a number of screening questions and was eliminated.

Both of the remaining alternatives assume more round trips:


The scoping process assumed that each corridor concept would operate six daily passenger rail round trips [six Cascades + one Coast Starlight] between Eugene/Springfield and Portland, Oregon, which would make the Oregon service consistent with Washington’s service between Portland and Seattle.

Improving the existing service seems like a no-brainer, but even this is estimated to be about $1 billion in total.

At the same time, ODOT wants to spend $500 million on a few miles of I-5 near the Rose Quarter. The SRC was also estimated at about $500 million. By comparison, $1 billion for the whole Eugene-Portland corridor is a bargain. So it may not be so expensive after all, and we should be sure to compare it with other big highway projects, not to take it absolutely without any context.

Some have argued that more bus service on I-5 would be more cost-effective and do more for greenhouse gas emissions. At present, however, it is much easier to take a bike on the train than on the bus, and it is easier to avoid any leg by car that way. The train is also more pleasant by an order of magnitude, not merely by a small incremental difference.

The DEIS is 300-some pages, and maybe there will be more to say after reading it and in advance of the Salem Open House.

Previous posts on the project are here.

Also, Restore Oregon announced this year's DeMuro Award winners, and the Baggage Depot was one of them. That's some nice recognition.
Posted by Salem Breakfast on Bikes at 7:00 AM