Stop Erasing the Driver in Crashes!


A mini-van crashed into a Salem donut shop Wednesday, injuring a customer standing at the counter.

Where's the driver in all this, the driver who is supposed to maintain control of a motor vehicle???


Here's a better example from 2015, identifying a driver error and failure to operate a vehicle safely. 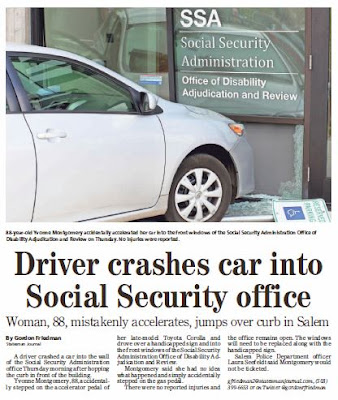 These are not isolated. Here's a post from September 2012 that lists at least 43 crashes into large stationary objects like buildings well off the roadway.

The consistent inability of humans to operate vehicles safely and their propensity to crash, not just into other moving vehicles or other moving people like those on foot or on bike, but into very large buildings, not at all invisible, and far from the roadway, constitute a significant body of evidence that we wildly overstate the safety of cars. Cars are dangerous, and we need to use them less often, use them for fewer miles, and drive them at slower speeds.
Posted by Salem Breakfast on Bikes at 8:30 AM

Email ThisBlogThis!Share to TwitterShare to FacebookShare to Pinterest
Labels: Erasing the Driver