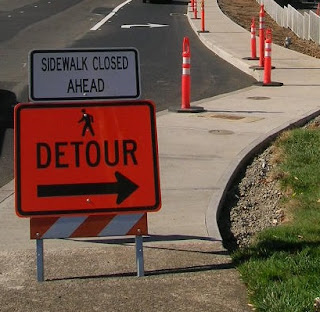 While the new gas station at Madrona and Commercial is all up and operating for a week or two now, as of Sunday, the new sidewalk at the turn lane and the reconfigured crosswalk both remained barricaded and incomplete. Strong young people can negotiate it, but for someone blind or infirm it's a dangerous barrier. The next crosswalks are blocks away at Vista and Browning.

Our priority for cars is clear.

Mostly it's framed up as "Where do we need new crosswalks?"

But as with the Congestion Relief Task Force and with the Public Transit Committee, there is an opportunity to integrate our approaches and to rethink our commitment to hydraulic autoism, that there is a steadily increasing pressure of fluid from cars and driving and that we should accommodate it with ever larger "pipes" and flow.

This outcome may not be very likely, of course, it is urgent.

(We'll just keep hammering away at the threat of Climate Disruption. Places for Bikes said "don't do that," but that seems disingenuous, and I don't see how that is honest at all.)

You will recall that The Intergovernmental Panel on Climate Change just released a report, "The Special Report on Global Warming of 1.5ºC," and said


Transitional changes are already underway in many systems but limiting warming to 1.5°C would require a rapid escalation in the scale and pace of transition, particularly in the next 10-20 years. While limiting warming to 1.5°C would involve many of the same types of transitions as limiting warming to 2°C, the pace of change would need to be much faster. While the pace of change that would be required to limit warming to 1.5°C can be found in the past, there is no historical precedent for the scale of the necessary transitions, in particular in a socially and economically sustainable way. Resolving such speed and scale issues would require people’s support, public-sector interventions and private-sector cooperation. [italics added]

On Commercial, the driveway is opposite the driveway to the main store. At one time a right-in, right-out median was considered, and this could have functioned with a pedestrian refuge median for crossing to the bus stop.


Commercial is very wide here, 85% of drivers go more than 11mph over the posted speed - so over 4000 people a day should be getting ticketed for speeding! - and even with full sidewalks this a very hostile environment for walking.

And just up the street there is an area that lacks sidewalks, even more hostile.

And there are other distractions for drivers not far away. 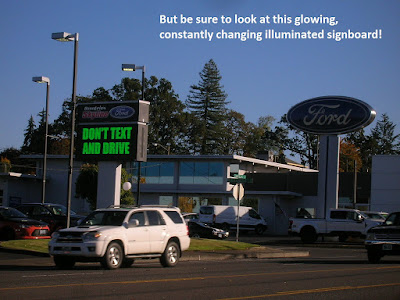 The Committee will be steered to think of new crosswalks as things to apply over existing infrastructure. They should want to go further and press the City to rethink mobility and streets altogether.

This piece is fascinating!

Email ThisBlogThis!Share to TwitterShare to FacebookShare to Pinterest
Labels: Safer Crossings and Sidewalks

What's up with having such an important group meeting during the day?

Not sure why they are meeting then - unless they see it mostly as a technical committee for the work day more than a citizen/neighborhood advocacy opportunity.

Also added link to a very interesting piece on a project in Minnesota on norming up crosswalk compliance and improving safety.