Scoring Criteria and Draft Chapter 5 of RTSP look more Autoist: At the MPO

The Technical Advisory Committee for our local Metropolitan Planning Organization meets on Tuesday the 9th, and it looks like the current draft of the evaluation criteria for scoring projects in the Regional Transportation System Plan has eliminated most anything related to the environment, bikes, walking, or transit. It's all about cars. Overall, the RTSP may be heading in the wrong direction.

Apparently impacting a "CEH resource" - cultural, environmental, historic? - could be a problem, but that's more about paving over a wetland and less about polluting the air. It's about direct impacts to a specific place and not about indirect impacts to whole systems.

Here's the first draft for comparison. On the one hand it's reasonable to want to simplify, but on the other, the current draft is more autoist.

The Committee will also be looking at a draft of Chapter 5 on "Needs, Gaps and Deficiency Analysis and Identification" for the Regional Transportation System Plan.

Just as a matter of priority, it is interesting that "efficiency" and "congestion" come before "safety" in the chapter. That may not really be all that important, but it's something to note

As a general approach, the chapter takes care to avoid "less driving" and "fewer drivers" as any part of a strategy for congestion, safety, and efficiency. There's no mention of transit here. It's all hydraulic autoism. 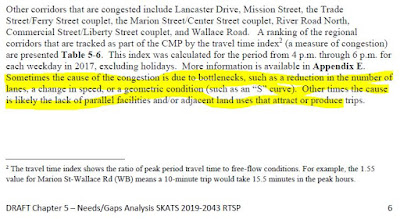 On safety there's a defeatist attitude. "[I]t would seem that the area, and the nation as a whole, is facing a situation with few solutions."

But "less driving," "fewer drivers," and "slower driving" are all proven solutions! The problem is that they are often unpopular, not that they are ineffective.

In a fundamental way the draft chapter evades the way driving is problematic, polluting, and dangerous.

It assumes as unstated axiom and desideratum that we need to make it easy for more driving.

On an historical note, in the September minutes there's an interesting tidbit about the gap between wish list and funded actuality in the RTSP over a 20 year span:


Mr. Jackson informed TAC members that as previously requested, he researched the status of the projects in the 1996 RTSP. He reported that of the ninety projects included in the 1996 RTSP, thirty-four have been completed and nineteen are probably done but with changes in the description.