What should we Expect from a Public Bikes Program?

News has been filtering out that operators of a public bike system will go to Council on November 13th for final approval of an agreement.

The installation would occur over the winter and bike rentals themselves launch in early spring.

The SJ reports that the concept has been scaled back to about 30 bikes at six or seven stations.

Excitement will run high, but just for context, we should be clear about expectations.

Portland's much, much larger public bike system has been running about 1 trip per bike per day.

Eugene's was running 3 trips per bike per day. Eugene's is also larger with ten times as many bikes, about 300, and a commensurately larger number of stations.

Corvallis might be the most directly comparable system, and they have 10 stations with 50 bikes currently. They've published total membership numbers, not daily rides, but it looks like maybe 2 trips per bike per day.

Three per day is a great success! From back in May:


When the city of Eugene and Lane Transit District commissioned a 2014 study to look at demand for a bike rental program, officials predicted that each rented bicycle would make less than one daily trip on average.

Instead, each of the 300 blue PeaceHealth Rides bikes that popped up around town last month have averaged about three trips per day, blowing past officials’ early expectations.

So if we expect something more like one trip per day per bike, that's 30 new bike trips each day.

That might be a nice amenity for tourism marketing and cachet, but that's not a meaningful difference in downtown transportation.

So, you know, start small, hope for success, and build off of that. But we should be clear this is a perk or amenity, not a difference-maker for mobility.

It's also not clear that there will be much riding outside of the Wallace-Riverfront-Minto Park system. To be sure, that the Union and Minto Bridges connect them all is a great boon! But that's recreating, not commuting or utility cycling.

You might remember the piece from a couple of years ago about an attempt to bike downtown. There will be a station at the transit mall, but how will users ride? 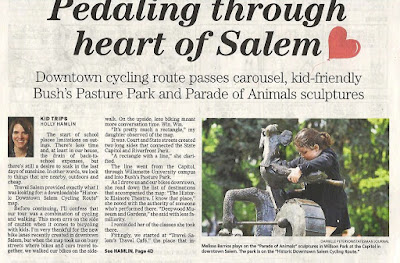 
I'll confess that our tour was a combination of cycling and walking. This mom errs on the side of caution when it comes to bicycling with kids. I'm very thankful for the new bike lanes recently created in downtown Salem, but when the map took us on busy streets where bikes and cars travel together, we walked our bikes on the sidewalk. [italics added]

One of the probable consequences of having a public bike system downtown without also adjusting the streets, especially for east-west travel, is that we will have more sidewalk biking.

Certainly there will be more path riding in the park system.

Altogether, what I see is a city that likes the idea of being able to say it has a bikeshare system, as a kind of symbol of hip culture, but not a city that's really very passionate yet about making it easy to bike and ensuring that riders have the right infrastructure, especially downtown where the stations are clustered.

As for the bikes themselves, there's a small risk this type is already old. New fully dockless models that don't use a station at all as well as e-bikes may be more popular or more useful than the semi-docked pedal model.

So we'll see. These are the kinds of concerns on which you want to be wrong and proven otherwise.

The best and most likely outcome may be that the bike system functions as a kind of heuristic, pointing out or giving greater visibility to deficiencies and and assets. It may disclose latent demand of which we have not been aware. It may lead us to new facilities and new policies.  My hope is that it will create more urgency for the Downtown Mobility Study's current recommendations and impetus then to exceed them for non-auto mobility downtown.

More than anything, it's a starting point. Who knows where it will lead?!
Posted by Salem Breakfast on Bikes at 7:00 AM