The Costco appeal at Council on Monday has lots of interest, and there will be plenty of people writing and talking about it.

From here, it has seemed like most of the problems stem from the 2007 zoning change and associated approvals. That was the real point for leverage. Maybe someone will develop a new critique that sticks, but in a very general way it seems like once you grant the terms in the 2007 approval, there's plenty of room for a big box.

A lot of the criticism focuses on the idea that the neighborhood was promised a smaller-scaled development, a "community shopping center."

But this at least in part trades on a quibble with the meaning of "community." We might see that word and think small, fine-grained, local retail.

In the context of the 2005 Comprehensive Plan, "community" means wider community, perhaps even regional community, and not the smaller-scale of "neighborhood."
But the 2007 approval did not specify "neighborhood shopping"; it specified "community shopping."

Just in broad terms, any shopping center on Kuebler just off I-5 would be oriented for intense autoism and a regional draw.

Another area of criticism is the "Traffic Impact Analysis."

One comment that seemed especially level-headed and persuasive came from a retired public works director. He wrote:


I am not a traffic engineer, but I am a retired Marion County engineer and public works director with 30 years of experience dealing with land use and traffic issues. My impression from a conversation with the Kittelson representative at the open house, reinforced by reviewing the TIA, is that Kittelson’s analysis seriously underestimates the new trips to be attracted by this large-scale project. Google helped me to find five other Costco TIA’s, three done by Kittelson and two by other consultants. Boiling the typically massive document down to some basic numbers, I believe Kittelson is underestimating trip generation by 33% to 50%....

The TIA takes a piecemeal approach, looking at Costco in isolation. It ignores the cumulative impact of Costco plus two adjacent regional shopping centers, plus the existing and future businesses on the site, plus the million-square-foot Amazon distribution center off Aumsville Highway, plus the huge retirement facility under construction to the south of the Costco site, and hundreds of new and proposed apartments and subdivisions now in the development process....

I submit there is a solid case for requiring Kittelson to revisit their trip generation numbers for Costco and all affected mitigation measures.

These are intensely autoist facilities, and it's not like incremental improvements to sidewalks, bike lanes, and transit are going to make meaningful impacts to the number of car trips. At the same time, by accommodating car traffic too much with widening for additional capacity, we will simply induce more car trips. The 2007 decision locked in an unfortunate and autoist destiny.
The other big area for criticism is the plan to cut down a small grove of mature White Oak trees and the insufficiency of Salem's tree retention efforts.

As a footnote, the roundabout makes walking and biking less convenient. Primarily it acts to speed the cars in and out. But there might be some people from north of Keubler who would occasionally bike, from the developing Fairview or Hillcrest areas, and crossing Keubler remains a problem.

The Transit Committee will formally present their report and recommendations and ask for "staff to return with a work plan for implementation." (Number 7 is new since October, notes here and here.)
One way that the Comprehensive Plan process may already be missing the point can be seen on the "Access to Transit" overlay they presented at the Open House earlier this week.

The map's quarter mile buffer makes it look like most areas have decent access to transit, with only the outermost areas outside the buffer.

But this omits the dimensions of time and frequency.

Does hourly service really constitute full "access to transit"? How about the gap in the evening and on weekends?

A better map would focus on Cherriots' frequent service routes, those indicated in red I think on the current system map (the map legend, by the way, totally lacks a color key! So there's no way to know what the red actually stands for, especially for someone who is not already a regular user of Cherriots).


In the Comprehensive Plan study, we should reconceptualize our transit analysis to focus on "useful transit," transit that offers an easy substitute for a car trip, not transportation of last resort that requires fussing over schedules with only hourly service and likely additional waits for transfers.

And that means the frequent service lines.

There are a couple of grants for the Sobering Center, one from the State, the other from the Downtown Urban Renewal Area. CANDO has raised significant questions about the way the center is being funded, in "Sobering Center Sustainable?" and "Urban Renewal to the Rescue."


the Agency Board [should] authorize the Executive Director to execute the attached Amendment and Addendum to the Convention Center Management Agreement to temporarily suspend Gain Loss Reserve Account requirements to facilitate the remodel and expansion of the Salem Convention Center kitchen facilities?...

The SCC has generated a profit each year since opening and has not experienced an operating shortfall. Annual profits of the SCC contribute to the reserve. In recent years contributions have ranged between $300,000 and $700,000. The current balance of the Gain Loss Reserve is $4.8 million.

There are reasons to doubt this claim about profit. Here are two excerpts from previous years' financials, which appear to show a loss and "operating shortfall." The City's claim deserves more scrutiny and analysis.


And again, as there are especially interesting news pieces or blog posts or social media about the Costco appeal, we'll add and update below.

LUBA published their decision this week, and is gratifying that in a general way, they agree with the thoughts here, finding more force and generally supporting the City for the tree argument, and finding weakness and problem in the City's interpretation of the 2007 decision. 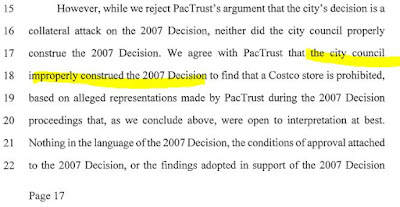 I'm not sure that drilling into more detail is useful or interesting. Maybe the LUBA decision will get appealed, but at present it will be remanded to the City for reconsideration on a couple of points. Costco and the developer have separately also brought a lawsuit against the City. They also claim the $3 million+ in road work they've done automatically qualifies the development proposal in key ways and removes the prospect of Council oversight or denial. (Hopefully this isn't too much of a simplification! Maybe as others weigh in there will be more to say in a separate post.)
Posted by Salem Breakfast on Bikes at 9:30 AM

The vague nature of the terms in the Costco case are not new and in my opinion are deliberate. For decades the City has refused to define key terms when it comes to the impact of development.

For almost 30 years I have advocated for a definition of the word 'vicinity.' It came to light back in the 1990s when an apartment was proposed in West Salem behind the Safeway store. The City denied the application and it went on appeal to LUBA. The case was remanded back to the City Council asking them to define 'vicinity' but they drug their feet long enough that the project got replaced by a "nature area' through the work of the neighbors on the property owner.

Over and over again in the years since Neighborhoods have tried to use the lack of a definition of vicinity to argue land use cases. In transportation studies done by applicants, they get to define 'vicinity,' because the City code has no definition of their own. Planners have told me over the years, that while they know it is a problem, there is no will to change it by department directors, the Planning Commission or the City Council.

We need to get the City Council to finally define that term!

The second flaw as you point out is the lack of 'accumulative impact' of development projects in an area. Each land use case is dealt with as if it were an island and not connected to the rest of the world. I ran up against this in a subdivision case back in the 1990s and it was on its way to LUBA, when it was settled. Since then there just has been no appeal that is worthy of a fight for a definition, although it did come up when there was a huge fight over where to put the new Leslie Middle School.

So, unless the City Council takes the lead, I do not think a definition of key terms will happen.

I hope that throughout all the testimony this way and that about a wide range of issues that the Councilors can see their way to address these issues. Will they be able to see the bigger issues, through all the trees?

I am not sure they will be able to stop this development without another appeal to LUBA, but I hope they at least fix these flaws in our codes sometime soon.

As you point out there is an accumulated impact if all the proposed developments happen in this area that needs to be address. But the City Council MUSt base any decision on the existing codes. They have to be able to defend their decision at LUBA is necessary.

There was a group of us who wanted to see if we could get the City to change the very odd chapter in our City Charter (Chapter 9 Section 55) that speaks to large shopping centers on the City's edges. However, the topic is so obscured by the tree and traffic issues, I am not sure it will be raised effectively here.

We did not get to this development situation in just one step. It has been a long, drawn out process going back to as early as 2005. Not only the South Gateway NA tried to bring attention to the problem, ( I mean the old SGNA before they got tossed out), but so did many other Neighborhood Associations and the Salem Land Use Network. We could not get traction with the City Council at the time, but maybe there is hope today.


This is yet another example of how hard it is to do 'good urban planning' when you do not have objective codes, committees and processes. To me this kind of problem bodes no realistic hope for the "Our Salem" Comprehensive Plan update to give us a good outcome going forward, if we do not address some of these very important and basic issues.

Also of interest is the recommendation by UDD Director Kristin Retherford to kill the Community Services and Housing Commission, having found, among other things, that "many duties of the CSHC are now included in the position description for the Homeless Coordinator" (a questionable assertion) and "community input in grant program awards and other matters can be achieved through limited duration ad hoc committees and work groups." Kinda concerning, given the City takes the position that work groups are not subject to Oregon's public meetings laws.

(Added brief update on the LUBA decision on the Costco project)