The Sense of Good Cents: Ornament for the Mill Race's Emptiness - Updated

A new piece of public art will be dedicated downtown on Thursday the 13th at noon.

Last weekend it looked like the site was already being prepared. But as you can see from the rendering, it's not exactly in the same spot. It's on the same block along the Mill Race, but in the eastern half rather than the western half.*

The work is part of a trio, a kind of sculptural triptych at different sites, each celebrating important legislation and moments in our self-identity as Oregonians, all of them linked to Governor Tom McCall. "Good Cents," the monument here, celebrates the 50th anniversary of the Bottle Bill.

BikePortland has news about a related commemoration of the Bike Bill to be installed at PSU partially also in honor of Sam Oakland, a professor and advocate for bikes. It looks suggestive of early 20th century Futurism and speed - perhaps even of scorching!

Earlier this summer the piece commemorating Senate Bill 100, our land use law, was installed and dedicated at Sokol Blosser winery. It's pretty clearly a "frame," something in which to frame a view, frame ourselves, frame an understanding. Maybe a gateway also. Even though it's rusty and solid, it's almost wholly metaphor.

The pieces are all part of the Oregon Environmental Council's "Art of Loving Oregon" project.

Senate Bill 100 (land use planning), the Bike Bill and the Bottle Bill now provide Oregonians with a legacy of vibrant cities, fertile farms and scenic landscapes. As we celebrate 50 years of loving Oregon in 2018, we are proud to recognize these legislative accomplishments with three public art installations.

These are celebratory public monuments. We might even consider them as benign propaganda. They should be rousing and inspiring!

Alas, the pieces are underwhelming and seem strange choices for commemorative public art, too modest as monuments. If we're supposed to get fired up contemplating the terrificness and wisdom of these landmark laws, they elicit more of a polite golf clap. Maybe they will rouse your spirit more.

Apart from the artworks themselves, mostly I get the sites. PSU for Sam Oakland and Portland, and the winery for land use are both logical places (though the winery's piece isn't in public space).

But I'm less sure about the Mill Race here. Since the Bottle Drop storefronts and reverse vending machines, together key parts of the latest iteration of the Bottle Bill, feature so prominently in the OEC materials promoting "Loving Oregon," it remains puzzling why the Bottle Bill art wasn't something modular or editioned so it could be installed in every Bottle Drop statewide. That's where the public art belongs! Even with chain standardization, the Bottle Drops are sticky and smell of yeast and stale beer, and a jolt of art might be welcome to counter the morning-after mood. Those storefronts, anyway, are where the public most intensely works with the law and the institutions it created. What does the Mill Race have to do with the law?

Moreover, on the mill race by a parking lot, in a dull expression of 1970s urban renewal, with few adjacent storefronts or active building fronts, a sculpture risks being just another gesture to ornament an empty space. In Bush Park "Guidance for Youth," and the roundel on the backside for the Centennial, both are largely forgotten ornaments, tucked away along the path system; when we remember them, it's because of the rejected nudity, not for the art that's actually there. Why do we deploy our art this way? Too often we use it to ornament the spandrels and voids, and do not use it to create or reinforce great public space.

* I'm not 100% positive about the spot, but, you know, 99% sure. The report presented to Council showed two different sites and was not consistent. The plan view in the report did locate the sculpture on that bank immediately north of the SAIF parking lot and at that spot. It's also hard to imagine that kind of concrete base being done this time of year for anything else.

Yeah, that was the spot! 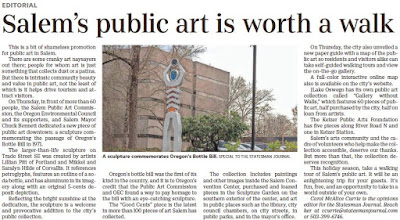 They write in today's paper:


There are some cranky art naysayers out there; people for whom art is just something that collects dust or a patina. But there is intrinsic community beauty and value in public art, not the least of which is it helps drive tourism and attract visitors.

Until our art collection becomes world historical in stature, I think they vastly overstate the effect of public art "driving tourism" and "attracting visitors." This has it backwards: Well-placed public art is the serendipitous grace note on a trip fundamentally planned around other aims. It is accent and garnish, not main dish.
Posted by Salem Breakfast on Bikes at 12:01 PM

Added pictures from after the installation and dedication.

That statue and the roundel or shield relief on back is most definitely going to get more attention in 2022, and it will have a much greater emphasis on settler colonialism.

One of the artists behind "Good Cents" is Lillian Pitt, a member of the Confederated Tribes of Warm Springs, and were I writing this post again, I would not use "Guidance" or the statehood roundel as a comparison. It now strikes me as tone deaf and inappropriate. It is possible I will edit it out as I think on it more.