An Arid Garden? No Love for Lord and Schryver at the Mill!

Teasing the new collaborative show at the Mill, featuring contributions from area historical societies and museums, last month on social media they wrote:


Come see "Romance: Stories of Love and Passion in the Mid-Willamette Valley" to experience a close look into the romantic and passionate lives of those who came before us.

Certainly that's how the paper interpreted it in today's piece on the show. 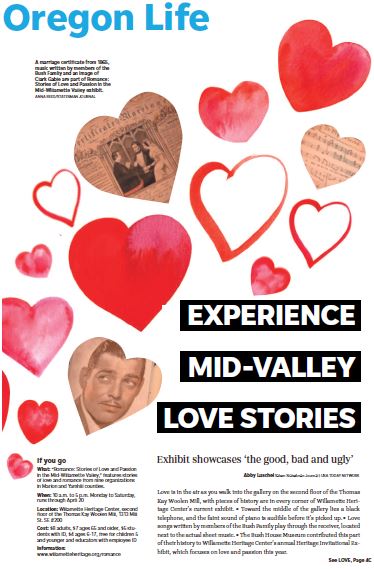 They even start with the word:


Love is in the air as you walk into the gallery on the second floor of the Thomas Kay Woolen Mill, with pieces of history are in every corner of Willamette Heritage Center's current exhibit.

Toward the middle of the gallery lies a black telephone, and the faint sound of piano is audible before it's picked up.

Love songs written by members of the Bush Family play through the receiver, located next to the actual sheet music.

So it is very strange to see the way the Lord & Schryver Conservancy interpreted the directive and theme.


Before it was a "professional" story about "the first female-owned landscape architecture firm in the Northwest," wasn't Lord & Schryver first a love story?

Over at ShineonSalem in a series on important women in Salem history, they relate a piece of oral history:


A diminutive, but adult, young lady traveling to Europe by ship was placed by mistake at the Children’s Table in Dining Salon. When she requested a glass of wine and was refused, she insisted on being moved to another table. There she met Elizabeth Lord who would be her lifetime companion and partner in one of the pioneer landscaping firms of the Northwest. She was, of course, Edith Schryver.

Now that's the start to a love story, right?!

But even in our post-Obergefell moment, any love, romance, and passion between Elizabeth Lord and Edith Schryver is essentially erased in our official narratives about Lord & Schryver. The Conservancy that now seeks to preserve and educate about the garden and landscape firm looks past the centrality of any love story, or any inner and affective life, in a very determined way. Instead, it's a professional story about the first women-owned landscape firm. They only utter things about passion for plants, not any human passion. "Let the garden embrace you."

In the exhibit at the Mill, as there have been other times, there are what might be a few "wink, wink" references for them that have eyes to see, but that's a reversion to the code of the closet really, and it is strange still to see these oblique and coded hints.

This is so very odd. The love story was a lay-up, a gimme. What is going on here? Why is this human passion so intensely evaded?

Is it that the story is complicated, could be operatic, even, with passion in all senses? When Edith died, she was not buried with Elizabeth, and there surely is a story of some kind of anguish in that. And how does the odd figure of Sally Bush fit in? Alice Brown at Deepwood? As "associates," the history here has to be far more interesting and complicated. In the video "Women of Mission" the relationships are mostly talked around and the role of wealth minimized, mentioned mainly in passing. Advocates for the gardens of course want to talk about aesthetic greatness, but Elizabeth Lord was the daughter of a Governor. Her father also compiled Lord's Oregon Laws, a monumental text in the history of Oregon law. As patron, Sally Bush was very wealthy by Salem standards. Deepwood is by Salem standards a grand house. The firm of Lord & Schryver started in 1929, at the start of the Great Depression. No matter how talented they were, if they did not have access to wealth and to networks of wealthy Salemites, they would not have prospered. Wealth is absolutely at the center here also. As they were women and operated creatively outside of heterosexual expectations, they might have been marginalized; as daughter of a Governor and linked to wealthy patrons, they were very much at the center of the Salem Establishment. The ambiguous, or shifting, social location here is fascinating and deserves study. There are so many layers and angles. It's not just about beauty and aesthetic accomplishment in formal gardening and landscape design. It's so much more interesting than merely that.

Promoting the gardens may seem to call for one kind of rhetorical approach in marketing and public image. But if the Conservancy wants to be serious about the history in any public-facing way, they will need to open up their interpretive lens and look at these multiple layers and frames. Maybe they do this in private, but in public it's all too one-dimensional.

At the Mill's show, the panel on volunteers is a real renunciation, and does not do justice to the full tapestry and meaning of Lord & Schryver.
Posted by Salem Breakfast on Bikes at 12:30 PM

Email ThisBlogThis!Share to TwitterShare to FacebookShare to Pinterest
Labels: Lord and Schryver

Other than the fact that Elizabeth Lord and Edith Schryver lived together and did not marry, there is no evidence to assume they were a lesbian couple: no written correspondences that might hint at that fact, no oral history from family members, no pictures of the two cuddling or holding hands. They maintained separate bedrooms. I can't speak for the L & S conservancy, but I think they are being careful not to assume a relationship that the two women never claimed for themselves and for which the only evidence is suggestive but not definitive.

What you just said could have been the exhibit! You have outlined what would have been a terrific set of panels. A show on the evidence, with a discussion of the uncertainty and ambiguity, would have perfect for the theme of Romance, Love and Passion.

It would also have made a good historiographic display on the interpretive enterprise itself, and taught things about the difficulties in retrieving history among marginalized groups, who would be guarded and might not be able to telegraph or show publicly their personal commitments to wider Salem society. If they weren't out, would you expect them to have revealing photos or a single bedroom? How do historians interpret evidence from "the closet"?

It may not be very remarkable that the Conservancy lacks certainty on a number of questions; that's to be expected. What is remarkable is that there has not been discussion at all of any affective inner life - something that changes, too, over time - and how this is reshaped and re-presented in a public life.

This always struck me:
"There is little in the way of biographical material; items of a personal nature were removed at the request of the donor. Brief biographical sketches outline education, training and organizations relative to their profession."
http://archiveswest.orbiscascade.org/ark:/80444/xv36943
(I think this was originally noted on another blog exploring the same topic.)

Re: "items of a personal nature were removed"

Those archival lacunae, deliberately created by the donor, and even not necessarily per any instructions from L&S, though they could have been, are also evidence that there's more to the story.