Council meets on Monday, and they'll have a new scheme for System Development Charges to consider.

Changes to the schedule of System Development Charges require an interlocking set of agenda items:
But, dang, they remain opaque! Perhaps it was a mistake not to have followed this more closely from the start. Now, taking the proposal in absolute terms, without any notion of the debate and underlying analysis, and without any comparison to other possible schemes, it's very hard to say how much of an improvement this proposal really is. The rhetoric probably oversells the benefits, and it's hard sometimes just to take the language at face value.

On transportation there's some split with a majority report and a minority report, but to outsiders the way it's presented is not very meaningful. Transparency on the support, saying who voted for which proposal, would have shed more light. Here is a situation where potential bias or ideological preference would illuminate helpfully as citizens evaluate the proposal.


It is a little disappointing not to see more variable pricing. The transportation burden of a multi-family dwelling in downtown on a redeveloped lot near the transit center is very different from the burden imposed by a single-family dwelling on new greenfield development near the city limits. And the burden of a new multi-family development on a greenfield near Cordon Road very different from that redeveloped lot downtown.

It seems like we could make SDCs a stronger policy instrument, better aligned with planning goals, to incent development where we want it, and make it more costly where it is less helpful or is explicitly a luxury development.

The Committee and consultants behind the proposal look pretty solid, though, and that gives reason to think that in totality the proposal represents a reasonable compromise and absent a developed argument to the contrary, it is worth supporting.

Still, going into Our Salem, the City should have a greater interest in the citizenry understanding SDCs. This report just makes them sound hopelessly complicated. If there were a problem with them, apart from ideologically motivated complaint, who would develop that argument? Maybe things will come out in public comment at the Hearing, but this is stage-managed so that approval is a near-certainty and the votes already in hand.

(Maybe over the weekend as there is more time to read the report, there might be more to say on the proposal.)

There's another overage, hopefully the final bit on funding, for the Minto Bridge. Apparently fabricating the arches cost another $700,000. These are proposed to come from downtown Urban Renewal funds. Separately, on the Council side, the City also proposes to shift 2008 Road Bond monies to make the Urban Renewal district whole. But at this point, except for Marine Drive's $3 million and change, those bond funds should be spent. So where's this amount coming from? The URA funds would come from the Police Station and Division Street, but what project gets shorted in the bond list? The Staff Report is very thin on detail. This looks a little like creative accounting!

Purchasing the goat trail just north of Belcrest Cemetery has also run into more delay. (Here are notes on the last delay, and original discussion of the concept.)

The Urban Renewal Agency wants to shuffle $100,000 for some unknown project downtown. This may be benign, but the language in the Staff Report is so opaque. Insiders probably know what the funds will be used for, but not the public or any Councilor relying on the plain and explicit meaning of the Staff Report. What is explicit is that it looks like a fund for hostile urbanism, "to address homelessness":

The Council review of approvals for a 111-unit development on Wiltsey Road was deferred from the 11th, on account of the magnitude of the SRC deliberations, and there's space on this agenda for it to get a fair hearing. Mainly the problem seems to be the proposal to cut down so many trees, and maybe Council will find a way to strike a better balance between more housing and retaining some of the trees.

There are a couple of information items on the agenda that are of greater interest here than the action items on which actual decisions are going to be made. As far as the actual agenda goes, these are much less important, but I'm going to give them a lot more space.

One of them is a very long notice of the Planning Commission approval for the Mountain West project at Fairview.

The Heritage School and Mountain West negotiated several modest changes to the project, and Heritage gave their consent to the project and withdrew objections. One large change was to rotate several buildings by 90 degrees so they didn't look out over the school.


Heritage Street would be one-way only, and also get raised crosswalks to slow traffic and improve visibility of kids crossing.

Under stairwell bike parking was denied, as not to code. So they'll reformulate that.

Last month you probably saw the long profile and history of the Fairview project in the Sunday paper. 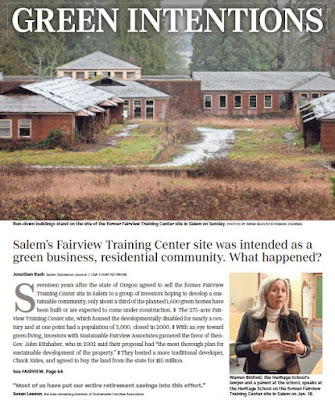 It hinted at the struggles of the initial investors and their needs for an exit.


Susan Leeson, the sole remaining member of Sustainable Fairview Associates [and widow of former Managing Partner Sam Hall], told the planning commissioners that the Mountain West proposal was "a model for multifamily" housing....

It is an optimistic spin to say that the plan here is a "model"! This is spin as exit strategy, nothing close to an objective assessment. So many of the "model" elements in the original vision are gone.

Still, it's been 15 years, more or less, and that's enough time to say "we tried." For whatever combination of reasons, the original vision was too ambitious, and it's reasonable to scale back and do something else, something more conventional. This is disappointing, of course. But there's been enough time for a run at vision, and it's ok to do dull and ordinary now. There's still opportunity for vision at the undeveloped parts.

The piece also gave a little bit of a timeline for the whole. After the initial purchase for $15 million,

In 2007, PJM Fairview filed for bankruptcy....Sustainable Fairview Associates and another group, OFO Partners, bought about 240 acres at auction.

In 2014, Sustainable Fairview Associates spun off into two companies, Leeson said. The other company is called SFA 2.

Olsen Design and Development, Inc., owned by Eric Olsen, is under contract with SFA 2 to purchase land on the west side. Olsen said the project — which started in late 2015 — has about 45 houses built or under construction, with about 175 still on the way, for a total of 220 homes.

At Pringle Creek, developers have either built or are in the process of building 21 houses, with 35 lots pending, said Pringle Creek Director of Development Jonathan Schachter.

Pringle Creek was the first to be active, and it's been very slow to develop. For whatever combination of reasons, the Salem market has not been ready for this vision.

The piece focuses on housing cost and housing form, but does not at all address any autoism and the original plan to mitigate it with robust non-auto connectivity. The autoism of the as-built conditions will be a real loss, and the whole is on a trajectory to be more of the same rather than anything genuinely innovative. 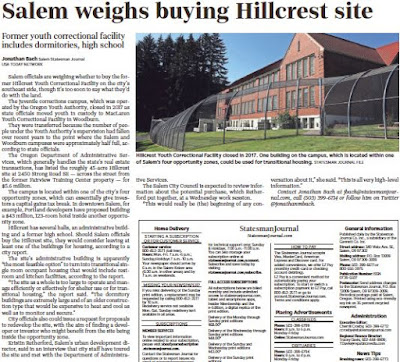 As the City considers the possibility of buying some or all of the Hillcrest site, it is worth remembering that it's really isolated out here and very car-dependent. 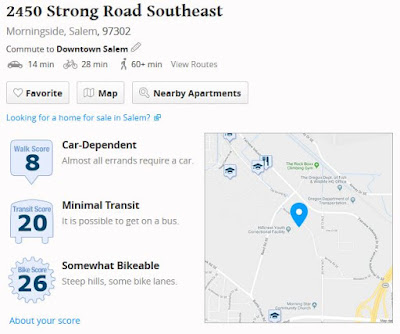 If any kind of social housing is part of a plan, this site is not good at all for people who would depend on walking, biking, or busing.

Before the City makes a move to purchase any or all of the Hillcrest property, they should take a long look at the way the Fairview project is turning out, and ensure that they are able to do things differently.

The 2018 annual report and next year's work plan for the Historic Landmarks Commission is also published as an information item, and it is at once full of wonderful things and also totally frustrating.

In a section on activities in SESNA, there are all these neat things that have not at all been published. They deserve more notice, and the publications should be available and easy to find on the City website.

There's what appears to be a booklet on historic buildings in SESNA. Why isn't this published to the City website?

SESNA and the City wrapped a bunch of utility vaults with historic and cultural interpretive wraps.

Why aren't these published separately and with a locator map? That would be a fun scavenger hunt, to find and read them all.

On one about transportation, they went with the standard autoist triumphalism, and missed out on the broader significance of Otto J. Wilson, who was a bike dealer before he was a car dealer.

And the HLC quarterly newsletter has disappeared from the City website! They should be publishing this there also.

There's all this great stuff, but it's not as available as it should be!
Posted by Salem Breakfast on Bikes at 8:00 AM

"Pringle Creek was the first to be active, and it's been very slow to develop. For whatever combination of reasons, the Salem market has not been ready for this vision."

Utter failure to market in Salem might be a fairly major reason. Their marketing scheme seems to be largely, if not entirely, Portland based (exactly how sustainable could they be, if they only get buyers needing to commute 100+ miles everyday?). So, they seem to have a few retiree households, and hardly any of Salem knows they even exist.

I am not surprised that you couldn't follow the SDC Methodology committee. There were never any minutes or tapes of the meetings ever published. I tried to follow the issue and complained several times to staff and to the City Manager about the lack of minutes. I was given several excuses, but in the end this is a clear violation of the Oregon Open Meetings and Oregon Public Records Laws which require that all meetings by committees that advise the elected officials must produce timely agendas and minutes. They have a few 'committee documents' on the city webpage, but I dare anyone to unstained what they mean as there is no narrative to accompany them.

SDCs are a very important way that Salem gets funds for building infrastructure. As you point out, we are apparently supposed to trust that the committee did a good job on the raised methodology. Trust but verify, I say. But you can't because there is not enough information provided.

My guess is that no Neighborhood Association had a presentation on the issue, has taken no position and will testify. MY guess is that developers will contend that the price of housing will be hurt by the new SDC fees. But who will we be to judge, because we haven't been provided any way to do our own thinking.

How are citizens supposed to trust their government is doing a good job when so much information is kept from us?