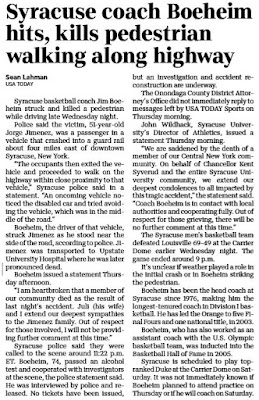 A piece buried in the sports section today shows more accurate rhetoric in reporting a crash that killed a person on foot:

In the body of the piece, it says "Boehem, the driver of that vehicle, struck Jimenez as he stood near the side of the road."

Here we have most of the pieces:
We could probably do more to get rid of the word "pedestrian," but that's less important.

Contrast this story with a recent one here. (Why is a national sports desk doing a better job with crash reporting?!)

But it is a very great problem, a life-altering problem, that Stephen Murphy was harmed! Even if the driver had stopped, offered assistance, and cooperated with police, Murphy still has to endure the injury, recovery, and financial consequences.

If you think intent is important, Boeheim did not intent to kill a man, but the scoundrel in Salem intended to flee. So the crime here is even more accurately described with a human subject and active verbs: Donald Crume struck and hurt Stephen Murphy and his guide dog, Amelia, while Murphy attempted to cross Hrubitz Road.

For more see notes on erasing the driver.
Posted by Salem Breakfast on Bikes at 8:30 AM

Email ThisBlogThis!Share to TwitterShare to FacebookShare to Pinterest
Labels: Erasing the Driver

I'd like to believe that most of this ambiguous type of reporting is just lazy copy paste from previous tragedy.