In the Sunday paper there was a nice piece on the history of Waconda.

It turns out there were two of them! This is alluded to in the Library's online history piece, but mainly in passing, and you might not have fully registered it:


Waconda was an old name in the Willamette Valley, originally applied to a community about a mile south of present-day Gervais. However, that little village disappeared, only to be resurrected in the name applied by the Oregon Electric to one of its rural stations.

The Oregon Electric Waconda is the one that still hangs around on maps and has an old ruin you can visit. It's the one that stays in mind. (It's great little bike ride!) 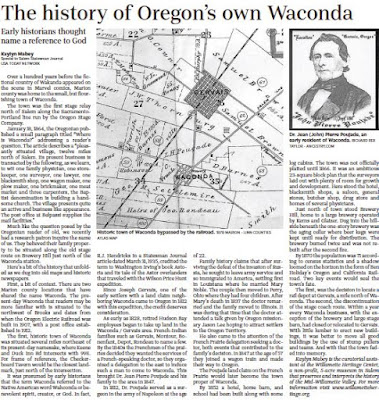 The piece in the paper* has more about the history of the first Waconda.


The town was the first stage relay north of Salem along the Sacramento- Portland line run by the Oregon Stage Company.

By 1852 a hotel, horse barn, and school had been built along with some log cabins. The town was not officially platted until 1866. It was an ambitious 23-square block plan that the surveyors laid out with plenty of room for growth and development....

But then the decisions to put the rail line through Gervais and to site a station there, as well as to end the stage coach line, prompted nearly everyone to relocate their homes and businesses to Gervais.

Our autoism and its support for decentralized patterns have erased a lot of the centrality of transportation hubs, and these abandoned and forgotten stops on stage and then rail might remind us of the usefulness of clustering. As we grapple with sustainability and resilience, what is old will be new again.

Willamette Week has a story about about Senate Bill 10, just introduced and sponsored by Senator Courtney, which would be a kind of revival for transit-oriented development in zoning, in fact:

* Though the SJ seems to aim for a "digital first" strategy in publishing stories first to the web, the history pieces lag behind, and often appear first in print. This piece does not yet seem to be online.
Posted by Salem Breakfast on Bikes at 12:01 PM