As the year winds down, three things this year seem clearly more important than the others.*

The SRC finally reached an end; Cherriots started weekend and evening service; and ODOT transitioned to a new agency head for more of the same, without also making any basic changes in philosophy or approach. 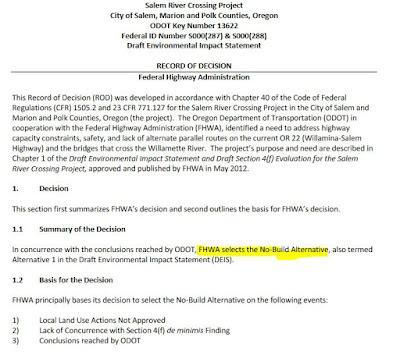 Back in February Council held a showdown on the Salem River Crossing after a remand from LUBA and a passive disinclination to do anything about it for all of the previous year in 2018. But the prospect of having to pay several million back the Feds focused matters and prompted an on-the-record decision.

Council chose not to make a new set of land use changes and chose instead to recommend a "no build" record of decision.

In September, the Federal Highway Administration and ODOT formally published that Record of Decision for the No Build alternative.

Thus ended this particular process for the Salem River Crossing and one idea of a third bridge.

Probably a river crossing concept will return as its politics are popular in some circles, but the scope and magnitude of our climate emergency, as well as the cost of a giant bridge and highway, together make it less likely that it will get very far, let alone ever be built.

In September Cherriots launched the first Saturday and limited evening service in years. They offered free rides every Saturday in September and held a party downtown at the Transit Mall. Next year limited Sunday service will also launch, and we may finally have a minimally functional full transit system.

After Matt Garrett resigned, ODOT and the OTC had a chance for course-correction and bringing the agency into the 21st century. They refused the chance and chose the leader of the failed CRC to head the agency and revive the CRC.

As far as lasting things of significance, these three are without a doubt the top transportation stories of the year.

There was a bunch of new construction set in motion downtown that will shape the city. As a cluster, it is sizeable, but perhaps they are not exactly transformative. It's mainly a larger quantity of building more than a real change in quality, urban form, or something more enduring like that. For 2019, however, several of them did not quite break ground, and it was the associated demolition that was more significant. A few more projects look to start in 2020.
Construction:
Big residential redevelopment projects:
It's harder to say how significant were the new warehouses out at the Mill Creek Corporate Center. But driving and transportation are all involved in several of the biggest stories: Costco and the land use appeal, the Amazon facility, In-and-Out Burger in Keizer. These may be stories to follow in more detail for 2020.
Alt-Transport remained all too Alt and Fringey

Some small transportation things happened. As symbols they might have seemed important, but as actual things with impact they remained small. Our levels of institutional support make them largely ornamental and shallow, not yet working into full systems.

Ride Salem, the bike rental system, launched, but its use was about a third or half of national standards, and remained a very small thing.

Open Streets Salem cancelled this year and postponed to next year. It has not yet found its footing.

Speed humps on Maple and a new stop sign on Market at Winter went in on the Winter-Maple Greenway, but the Greenway is incomplete and there are questions about how effective the current suite of treatments is.

A little more ambiguous is the SR2S coordinator grant and hiring. The initial goal is for five schools. That will not make a large city-wide difference by itself. But as a start of something, it could blossom into much greater things.

Road death was not ambiguous. While the City hyped the "safer crossings" program, drivers struck and killed Marshall Leslie, Roderic Drolshagen, and Linda Adamson in established crosswalks, and killed Josephine Watkins in a brand new enhanced crosswalk. Officially we evade the fact that we have a driving and speed problem, not a walking problem. There were many other roadway deaths also.


The City published an assessment for greenhouse gas emissions, and cars were by far the greatest source, but it remained very unclear what we were going to do about it.

"Congestion relief" and not "driving less" remained the dominant frame for transportation planning. (See all notes on "Our Salem" here.)

While storms themselves are weather and not climate, the changing climate will make flooding weather events more common. In April the Minto bridge path flooded, and during planning for the Bridge, the City over-and-over had said that the path would not have flooded in the 2012 flood. This flood was two feet lower, and obviously the path was under water. The engineering drawings showed the path at an elevation lower than the flood water heights, and the City's claims in 2012 were at least misleading and quite possibly an outright lie. This is why the citizenry sometimes does not trust the City.

The City's ambiguous tension between charting tailpipe emissions and misrepresenting floodwater impacts is the right note for 2019. Some things were positive, some things were not. The carbon level is rising.

* If something by chance comes up in the second half of the month, we'll update and edit this as necessary. But with Council wrapping up for the year on the 9th, and many meetings being cancelled over the rest of the month for the holidays, it is very likely that the important transportation stories for the year have already occurred.
Posted by Salem Breakfast on Bikes at 7:00 AM

City Councilors Andersen, Kaser, Hoy, Cook, Leung, and Ausec should be lauded for their leadership and bravery in voting for the "No Build" decision on the Salem River Crossing. They faced vicious attacks from the Salem Bridge Solutions group (especially Andersen and Kaser) that continue to this day. They did the right thing by pulling the plug on a 13-year project that was doomed from the start and had no future. About $10 million in discretionary transportation dollars was wasted on the project. SRC RIP.