Notes on Diversity: The Exclusionary City in 1926 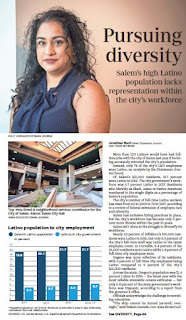 The front page article in the Sunday paper about diversity at City Hall* is very much focused on the present, but of course Salem and Oregon have a long history of bias. Any problems today are not merely the product of currently existing systems and people. They are also a deposit and partial legacy of deeply entrenched historical patterns. We've talked some here about statehood and the debate over slavery, and also about racist elements of our State Constitution.

From a couple of generations later, here's a moment from the interwar period shaped by the second KKK, when bias suddenly flowered into an overt expression. Just before this interwar period, in 1903 we condemned our Chinatown. You may recall the popularity of "Birth of a Nation" here in 1916, and in the same period the rise of deed and building restrictions in new housing developments. The expanding surveillance state, with the fear of Wobblies and Enemy Aliens, also were ingredients.

Altogether, however, the specific modes and instruments of bias here in Salem do not seem well understood or discussed. As far as I know, there's no detailed history of bias in Salem. We talk about bias generally sometimes, about the national currents, but not with names and dates and institutions as bias was specifically instantiated here by Salemites.  I don't know where this moment fits exactly in the full context and sweep of Salem history. Maybe you will know more about it. It's a complicated thing. This will be just a long footnote on the article.

The Polk Directories issued every few years are a great resource for history, and they show a curious eruption in 1926.

As part of the introductory material, oriented towards people who might want to move here or do business here (look at the price of $10 in 1926!), there is a city profile of several pages. It's boosterism and promotional, not critical. And it is mainly boilerplate, with great sections of it reprinted year after year.

It is impossible to read in any way other than expressing the sentiment that Whiteness is the quintessence of Americanness.


Salem is also known as the most all-American city in the west. More than 93 per cent of its people are American born and the others are all citizens. There is absolutely no foreign element in Salem. With a population of 26,000 there are only 30 negroes in the city and the few Japs and Chinese are mostly in one rural district.

This exact language appeared once only, so perhaps someone flagged it, understanding that it was problematic or excessive or too loud. It was trimmed or tamed, but not wholly deleted. The reference to "negroes," "Japs," and "Chinese" is omitted from the next version in 1930. It still, however, noted that "93 percent of its people are American born...[with] no foreign element."

The entire "All-American City" section is omitted finally in 1947.

Where did the 1926 paragraph originate? From City Hall? The Commercial Club or some other semi-official organization? It seems it must have been authorized somewhere, not something the Polk compilers just made up. It is deliberate, not accidental.

This has seemed like an explicit and overt expression of bias, one that did not require much euphemism or indirection. There's no dog whistle here. It's very loud and clear.

* And a footnote in the footnote! I know the "Latinx" formula might seem like an awkward neologism still, but isn't the front page article an implicit argument for it? The headline reads "Latino," but the image is "Latina," right?
Posted by Salem Breakfast on Bikes at 7:00 AM

If you haven’t read “Sundown Towns” by James Loewen (who also wrote “Lies my Teacher Told Me” about the santized, Whitewashed fables that are packaged and sold as “history” in school textbooks, and “Lies Across America” about sanitized, Whitewashed historical monuments) you really must.

Loewen's database indeed has an entry for Salem.

In 1990 the League of Women Voters of Marion and Polk Counties did a study of prejudice and race relations in Salem. It was called "The Acceptance Study." It interviewed 20 plus persons of color from this area about their experiences. The stories that these people told were very revealing.

Following The Study there was an event at the State Capitol building to share the findings and to talk about ways to increase acceptance in our community. Out of that came an event called "Salem Speaks Up!" which was held on December 10, 1992 where people were invited to come forward and talk about experiences with racism, intolerance, hate or other issue of prejudice in our community. As a part of that event was a recognition of the Salem Human Rights Commission that was founded by several women and Chief Justice Wallace Carson back in the 1970s. The City Council had just reduced the powers of the Commission to just be advisory and not investigate cases of discrimination.

That event has happened every year since. This year will be the 26th annual Salem Speaks Up! on December 10th at First United Methodist Church. Each year about a hundred people come to listen and dozens of people come forward to the open microphone to hear stories of sad things that have happened to them in Salem.

I am sure that this year, as in the past, people will be bothered that this kind of things still happens in our community. Unfortunately though each year there are more stories.

I have no idea when this will change for our community. I do know that the City Council has never restored the Human Rights Commission to its original purposes.