The Union Street Railroad Bridge is a gem. It's a wonderful bike and pedestrian connection across the river, and it's already loved.

But it's also something of an orphan. While the bridge makes for terrific park-to-park connections between Riverfront Park and Wallace Marine Park, busy roads cut it off from the wider network of bikeways. On the west side crossing Edgewater and Wallace Road is dangerous and very difficult for bicyclists. On the east side, crossing Front, Commercial, and Liberty is also dangerous and very difficult.

As it currently stands, for all but experienced and adventuresome urban cyclists the bridge only functions as a drive-to destination. But the bridge can do so much more!

Earlier this year, and group of bicycle experts rode the east side approach, and developed a plan to make Union street into a premier bike and walkway and to connect the bridge to the downtown street grid.

The first recommendation is already done! A month ago the city ground down the curb cut from Union so the risk of an involuntary dismount is slim. The proposal also includes a signal button and curb extension. The city has instead proposed to install two video cameras and to mark the bike zone clearly on the pavement.

This is a great start. 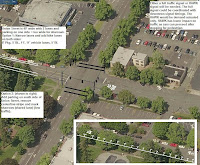 Moving east is Commercial. This will be the most difficult intersection to fix. On Commercial they recommend a full traffic signal or a HAWK signal. Commercial is four lanes wide here, and because it is fed from both Commercial and Division, the stop lights rarely create lulls in traffic. The signal sequencing instead creates a steady stream of traffic, especially during rush hour. 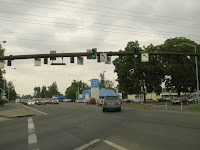 Here's the intersection at rush hour. You can see three lanes stacked up on Commercial, and cars queued up on Division behind the light, waiting to turn onto Commercial.

Some have argued that both pedestrian and bicycle traffic be routed from Union to this intersection, but this detour is complicated and slow, and requires too much sidewalk riding for bikes. It is a poor work-around.

The crossing at Liberty is much more straightforward. The light at Center does create lulls in the traffic, and because of the Marion Parkade and striping details, there are only two effective traffic lanes to cross. The group recommends curb extensions, which will make it easier to cross for both bicyclists and pedestrians.

The next crossing is at High street. The intersection is currently engineered appropriately for bicycles, and the group recommends no changes. Soon the Chemeketa Center for Business and Industry will open, and some students and others will want to bike. This also offers connections to the cluster of new development at Broadway and Market.

At Church, two-way traffic ends, and again there is unused space on the street. Curb extensions will shorten the crossing distance, and the group recommends eliminating the stops for east-west movement on Union.

On Cottage the group recommends a full traffic circle. This will eliminate the need for any stops.

Making these changes to Union street will make walking and biking to the bridge a pleasant and safe experience. This will expand the recreational possibilities of the bridge, and will encourage more and more people to use the bridge for active transportation on commuting and errands.

(The group also has plans for an analysis of the west side, but they haven't completed that yet. Stay tuned!)
Posted by Salem Breakfast on Bikes at 10:05 AM