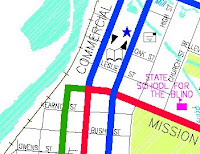 The intersection of Mission and Commercial is another dead-end for bikes. On the bike map, you can see the green elbow of Mission west of Commercial and turning south onto Saginaw.

But what about going north? What if you are coming into town and want to plot a route that uses Saginaw heading towards downtown? 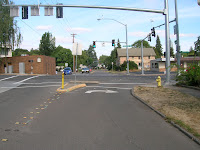 Here's the intersection you confront at Mission and Commercial. Commercial is one-way going south. You can't turn left to go north on Commercial.

But you can't go straight, either, to reach north-bound Liberty. The east-bound lane on Mission forces you to turn right, south-bound on Commercial.

In order to cross Commercial to get going on Mission to reach Liberty, you have to cross three cross-walks. There is no cross-walk on the right/south side of the street. Awkward. 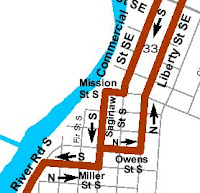 The new route for the Willamette Valley Scenic Bikeway handles the problem better. It directs you off Saginaw and onto Owens, and then to Liberty. In some ways, however, this defeats the purpose of a low-traffic alternative route, as it uses the bike lane on busy Liberty. Still, at least this is functional.*

But the problem points again, as we saw with Bush Park, to the need for a connected set of low-traffic alternatives to the Liberty/Commercial and 12th/13th couplets in inner south Salem.

Not all bicyclists are comfortable biking on busy streets. In fact, most bicyclists prefer low-traffic alternatives. Saginaw appears to be such an alternative, but it is missing essential northbound connections to downtown.

(* And it points out two completely different approaches to mapping: The Salem bike map shows facilities, what is there; the Scenic Bikeway map gives directions, how to get there. Only one of them is really functional.)
Posted by Salem Breakfast on Bikes at 10:22 AM

I think the area around Commercial, Liberty, Mission, and River Rd is more than a weak link. I've had the opportunity to ride this area for the last four years. First, I was going from River Rd to the Capital Mall area and now I go out Mission to the east side of town. With both rides, the bike lanes disappear for a period and then reappear leaving a rider to their own devices on the narrow Missions St or in fairly heavy traffic of Liberty. Rather than use Saginaw from Miller, I've opted to use Miller to cross both Commercial and Liberty (without signals) on the way to High Street. Right now instead of traveling on Mission I use the Willamette U parking lots and sidewalks. Look out pedestrians.

BTW The intersection at Liberty and Mission will seriously hurt someone eventually. There's a real mix of cars using the bike lane for right turns and bikes trying to avoid this problem by going out into the Liberty traffic. How do we bring something to solution?
N

Yeah, Mission's a problem. East-West movement is really difficult. Between Rural and Chemeketa there are no connecting E-W low-traffic streets. The park, the creeks, the railroad, and the Liberty/Commercial and 12th/13th couplets are significant barriers, and only arterials pierce them.

I'm not sure the intersection of Liberty and Mission can be re-engineered in any signficant way - not until they want to take Liberty from 4 to 3 auto lanes, at any rate. Skilled cyclists can take the lane as necessary on Liberty. If I'm going to the library, for example, I'm already moving left at Miller & Owens (and sometimes earlier!), so that I cross Mission in the left lane. It's also an education project for motorists that they need to yield to bicyclists in the bike lane that the bike lane is not a turn lane.

The difficulty of re-engineering busy streets is another reason we focus on low-traffic alternatives. Research in Portland suggests that low-traffic bicycle boulevards get used 10x as much as bike lanes on busy streets. If there were high-quality routes through Bush Park that connected to Church & Winter, or if High were calmed more and not an informal "by-pass," that would accommodate many more cyclists than improving Liberty/Commercial.