Gravel and Bridges: The Barriers at Bush Park, part II 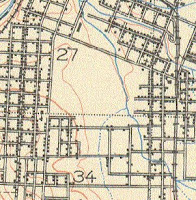 Monday, we looked at the entries/exits for bicycles on Bush Park's northern edge, along Mission street. The connections aren't very good, unfortunately.

On the west, south, and east sides of Bush Park are other entries to the park. And only one of them is very good. Bush Park is a logical, low-traffic alternative for bicyclists, especially those moving north-south to or from downtown. Unfortunately, its bikeways are neither well-marked nor high-quality, and the crossings difficult. 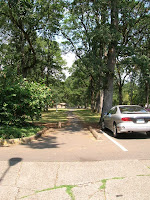 On the south side of the park, the path at Leffelle and Church is often used by those going through the park as a north-south alternative to Commercial/Liberty or High. The path here is narrow, and hemmed in by parking spots. It's adequate, but neither signed nor inviting, and the paving is bumpy. Its existence is secret lore, known mainly to locals; its quality low. 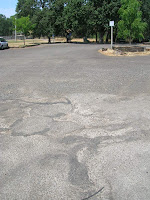 At the base of the hills, in the lower parking lot at Leffelle and Yew, there's another entry. This one is marked with an old sign, and the entry to the path is marked by a kiosk. But a large gravel parking lot, dusty and bumpy in the summer, puddly and muddy in the winter, stands between the end of the road and the beginning of the full-width path. This path terminates at Winter and Mission. Along the path, some roots have created waves in the pavement, and though this path is wider than the upper path, it is not high quality, either.

East-west movement through the park is essentially impossible. On the west, Commercial and Liberty are barriers to cross movement, and on the east, Pringle Creek, 12th, 13th, and the railroad tracks are barriers. No single east-west line maintains uninterrupted progress. 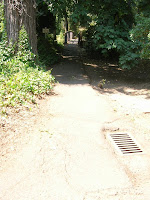 On the east, Hines is the only road that crosses the rail tracks, and it's also the only road that crosses 12th/13th at lights. Hines deadends at the creek. Bicyclists may move south one block to Cross street and enter the park at Leffelle and Yew. The other movement takes them one block north to Waller. At the end of Waller is a narrow bridge across the creek. This takes a bicyclist onto a bark trail and then back onto the paved trail system. None of the surfaces are very good, and the bridge is narrow enough that it's clearly intended for pedestrian traffic. It is not signed. It too is secret lore. 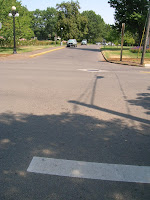 There is, however, one fine entry to the park. The main park entry on Bush at High street is high-quality. It is marked, the pavement is good, and traffic is usually slow. The only problem with Bush street is that neither Commercial nor Liberty are stopped for Bush cross-traffic. Consequently once a bicyclist leaves the park, the bicyclist continuing across Liberty and Commercial will generally go to another road.

Bush Park is wonderful. But it is also prime real estate between the very busy roads of Commercial/Liberty and 12th/13th couplets. Bicyclists are right to want alternative ways to move between south Salem and downtown, and between different parts of south Salem. Currently, the park offers meagre entries and bikeways through it. But the park also offers wonderful potential for low-traffic alternative bikeways: attractive, well-marked, and high-quality, these could help boost bike trips from inner south and southeast neighborhoods.
Posted by Salem Breakfast on Bikes at 9:15 AM