Wallace at Glen Creek: Main Entry to the Bridge to get More Difficult

Wallace at Glen Creek NW is almost certainly the most important entry on the west side to the Union Street Railroad Bridge. It's already a very difficult intersection, and one of the Keep Salem Moving road bond projects is an $8.5M widening of the intersection.

Under the guise of "congestion relief" the city's plan will create two right-turn lanes from Glen Creek. This will only make the pedestrian and bicycle crossing longer, double the cross-traffic lanes, and make it more dangerous.

Update:Here's the project description from the city.

....
The basic project will widen the roadways to create Wallace Road northbound dual left-turn lanes to westbound Glen Creek Road, and a Glen Creek Road eastbound dual right-turn lane to southbound Wallace Road. Work will also be done on the other two intersection approaches, along with a new traffic signal....

The City of Salem and Oregon Department of Transportation (ODOT) are working jointly to accomplish improvements at this intersection. Glen Creek Road NW is a City street and Wallace Road NW is the Salem-Dayton OR 221 Highway.

ODOT will lead development activities with support from the City of Salem....Public involvement will be sought periodically during development of the project. Presentations will be made to interested parties when more information is available. Construction will start in 2014.

The total cost of this intersection improvement project is approximately $11 million, comprised of $8.5 million in city bond funds and $3.4 million in federal/state funds....


The plan is a terrific example of a feedback loop going in the wrong direction. The intersection will become more difficult for pedestrian and bicycle trips - the very kinds of trips that would take cars off the road and relieve congestion. In the end, the project will pump more autos through, induce increased demand, and create even more congestion. 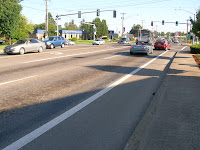 From Wallace heading into town, a left turn onto Glen Creek requires a left merge from the bike lane across two very busy auto lanes of traffic. The road widening will only make this worse.

The alternative is for a bicyclist to go right, dismount, and use the crosswalk. 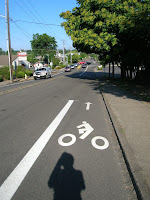 From Glen Creek, the bike lane ends mid-hill. It just simply disappears. To continue through the intersection a bicyclist must merge left across right-turn-only traffic. 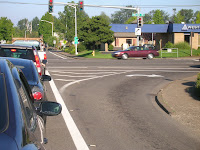 Here's the turn lane. There's no crosswalk on the right hand, inbound side. If you want to use the crosswalk, you have to use it three times for a chunk of out-of-direction travel.

Adding an additional turn lane from Glen Creek to Wallace will also exacerbate this problem for bikes and peds. 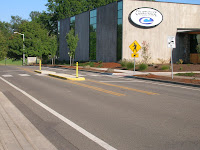 The funny thing is, just a little bit further down Glen Creek, the Courthouse has a lovely pedestrian median for the stroll from the parking lot to the gym.

Maybe the Courthouse privately paid for this improvement...but you know, it's pretty sad when the road engineering offers a better way to walk from the auto parking lot to the gym than a way to use active transportation to walk or bike to the gym and bridge. Glen Creek is not difficult to cross at the gym, and the concrete budget might have been more usefully directed to making Wallace easier to cross.

One of the recommendations of the Salem Rivercrossing Alternative Modes Study is to make the intersection easier for bikes and peds. Hopefully, the project will be reconsidered and redesigned in ways that will actually reduce congestion.

Is there any way to influence this project? This is on my main commute route, and I agree it would make a difficult situation (particularly for less confident cyclists-- including myself) even more difficult. I have to believe there is something they can do to mitigate the impact on bikes through smart design.

West Salem City Councilor Dan Clem is a key player. He has heard that the crossing is tricky, but it would be helpful if he hears more (and continues to hear) from west Salem constituents who are concerned about the intersection and the crossing. (That's 25,000 customer's who will find walking or biking to Roth's more difficult!)

Thanks for your interest in this important project!