As we said in Part I, the proposal to close Riverfront Park at State Street is bad because,

In place of three direct connections, there would now be two: Union, which is difficult, and Court, which doesn't work so well for bicycles. The direct and intuitive connection at State Street would be replaced by a non-intuitive round-about way that zigs and zags, and requires bicyclists to use the sidewalks.

There are two parallel barriers between downtown and the park: the highway of Front street bypass and the railroad line. Currently there are three crossings of each, and the crossings are directly coupled. Under the proposal, there will be three RR crossings, but only two front street crossings. This effectively makes only two crossings.

There are four principal reasons the proposal harms the Park and the Public:

1. Currently there are three direct links to Riverfront Park, the Carousel, and the Union Street Railroad Bridge. The Boise Proposal reduces this to two direct links.

2. The Boise Proposal inconveniences Pedestrians and Bicyclists - all other park users except motorists - in order to benefit motorists.

3. The Boise Proposal is not consistent with higher-level goals contained in the Downtown Vision 2020 Action Plan or the Rivercrossing Alternative Modes Study.

4. Finally, the Boise Proposal represents private development benefiting at the cost of Public access and a Public space.

Currently there are three direct links to Riverfront Park, the Carousel, and the Union Street Railroad Bridge. The Boise Proposal reduces this to two direct links.

The connections at Church street are better than at Union, but are oriented towards pedestrians not bicyclists.

When I cross the railroad bridge westbound, I always use the State street park entrance, as I can cross Front street in one signal cycle. Using Court appears to require waiting through two (long) cycles - when one side of the crossing is green, the other side appears to be red. Not to mention navigating around posts and such in a facility designed for pedestrians (only?). I've never had the patience to try it. I simply can't imagine exiting the park at Court - after a block, the street is one-way against me.

Closing the State St. park entrance would probably mean I'll use the railroad bridge far less; there wouldn't be a reasonably convenient (and prompt) access for bikes from downtown.

The Court Street entry funnels bicyclists onto the sidewalk and into the crosswalks. Unlike at State Street, where there is only one crosswalk, at Court there are two. However, the pedestrian median in between the two directions of Front enforces tight 90 degree turns in a space shared with pedestrians and requires crossing each direction of traffic in a separate stage - two signal cycles are indeed required.

Why is this so bad? In some ways it is not bad. A significant number of bicyclists do in fact use this entry into the park and for access to the Union Street Bridge. But bicyclists are vehicles under Oregon law and deserve to be able to use the roads. Traffic solutions should be making it easier for bicyclists to use the roads, not eliminating them from the roads. Moreover, and we'll discuss this in more detail later, According to the Oregon Bicyclist Manual, "In general you [a bicyclist] shouldn't ride on sidewalks. Many crashes between bikes and cars occur on sidewalks, especially when bicyclists ride against the flow of car traffic."

Traffic solutions that force bicyclists to use crosswalks and sidewalks are poor work-arounds that too often compromise the safety of all road users.

The Boise Proposal inconveniences Pedestrians and Bicyclists - all other park users except motorists - in order to benefit motorists.

The City's proposal creates a dead-end at State Street. It increases out of direction travel for pedestrians, bicyclists, and even cars.

It takes a direct and intuitive connection and makes it indirect and non-intuitive. Signs must do the work of natural inclination. 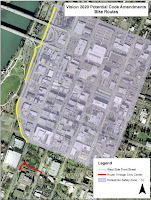 Many people have said that bicyclists can use the sidewalk to reach the park, and in fact there is a proposal to amend City Code to permit bicycling on the sidewalk at Front Street. At the time, this was pitched as a way to increase options. Now, however, it appears this this is part of the proposal to close the State Street crossing, and will become the only way for bicyclists to cross Front and use the new entry.

Again from the Oregon Bicyclist Manual: 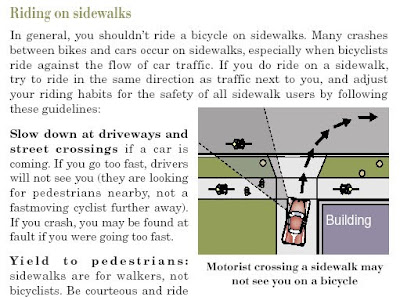 Finally, we saw the language contained in the City's Rail Application to ODOT:

Other than the inconvenience of pedestrians having to travel out of direction to the new southern entrance, the proposed crossing relocation is safer and can facilitate improved traffic access into the southern end of Riverfront Park. [emphasis added] 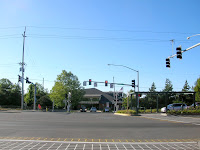 The State Street entry is also the natural terminus for a walking and bicycling boulevard. As Mary Lou Zeek observed in the Statesman,

As a State Street merchant, we have invested money and time in trying to advertise and brand our street from the Capitol to the Carousel, by pointing visitors to the Carousel and the park,"she said. "We, the merchants, are the best advertisers for downtown Salem.

The Feet follow the Eyes, and looking west on State street, the vanishing point on which the eyes rest, the focus at the end of the vista, is the Carousel. It is attractive and obvious. It should not become a dead-end.

The Boise Proposal is not consistent with higher-level goals contained in the Downtown Vision 2020 Action Plan or the Rivercrossing Alternative Modes Study.

And contains these goals:

Expand Options to Get About the City Center
Improve Connections to Parks, Creek and River

The Boise Proposal fails to meet these goals.

The Rivercrossing Alternative Modes Study, ironically, will be presenting to City Council just before the hearing tonight. The study

is looking at ways to decrease single-occupancy trips by offering different ways to cross the existing bridges, or any new bridges that develop out of the Salem River Crossing project.

One of its key recommendations is to create better connections to the Union Street Railroad Bridge for bicyclists and pedestrians. Until the connections across Front, Commercial, and Liberty are improved, Union Street itself is a barrier, and State Street a major connection to the bridge. Closing State Street is not consistent with this, either.

The Boise Project should make biking and walking reasonable choices - it should encourage them. It should be a centerpiece of sustainable development. Facing an outbound connection that forces you right or left on busy Front street does not encourage biking or walking as a direct link to downtown. The proposal makes it more likely people with drive short distances to cross Front Street to reach downtown.

About connectivity another bicyclist writes:

The proposal also hampers connectivity to the Union Street Railroad Bridge, and makes travel by other than single-occupant vehicles more rather than less likely.

Finally, the Boise Proposal represents private development benefiting at the cost of Public access and a Public space.

Harming Riverfront Park and the Union Street Railroad Bridge is an indirect subsidy for the Boise Project. This is not right.

Front Street and the Railroad (not to mention Commercial and Liberty) are formidable structural barriers between the Riverfront Park (with the Carousel and the Union Street Railroad Bridge). An appropriate solution to developing the Boise Project will reduce the barriers rather than increase them. Only reducing barriers will create new value for Park, Bridge, and new development.

City Council should reject the proposal and send the team back to the drawing board.
Posted by Salem Breakfast on Bikes at 7:30 AM

I am disappointed to hear that this is being considered and I hope that it doesn't happen. I bike to the waterfront park regularly with my son in a trailer behind my bike. We always use the State Street access to the park, as any other access is difficult or impossible for me to access on the roads at rush hour during the week. Riding on the sidewalks would never really be a feasible option for me, as the trailer makes yielding to pedestrians practically impossible, not to mention would be a trick I am not willing to try. Not only do bikes need to be considered more when making these decisions, but all the different forms of bike transportation (like towing a trailer). Thanks for being on top of this for us!