A Crack in the Kroc - Updated 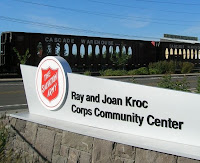 All this week we'll be reading praise and glory for the Kroc Center. It's a gem, a show piece, a feather in the city's cap. The effort that went into winning the center and into fund-raising is just amazing. Nothing can diminish that.

But the project's not done yet! There's still work to do. Can we talk honestly about its siting? Land appropriately priced and sized is limited, and maybe the site they chose was the best available.

But why wasn't more thought and funding given to making the site accessible and safe for kids and others who might not be able to drive? There is much talk about the value of physical activity, but the idea that some of the physical activity might come from walking, biking, or skateboarding there seems foreign to too many. Moreover, the population for whom the center is designed is also the group least likely to own a car. There are many for whom biking or walking is the only affordable transportation. The site is in an industrial wasteland! It's bounded by the Salem Parkway, the rail line, Portland Road, Cherry Avenue, and Hyacinth. Highways, rail, or busy roads, all of them. Manufacturing and logistics dominate the business base. 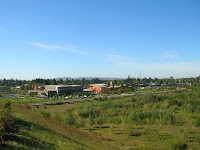 Things change, of course. The site also has the potential to be beautiful. On the north and east, a Claggett Creek restoration project promises wildfowl and flowers. But the area is still dominated by industry. Traffic speeds by, glass and metal and gravel litter the sides of the road. This is not a place a parent would send a child to walk or bike. This is a destination to which a parent must drive their child. 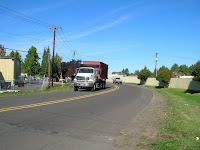 As you approach from Salem Industrial Drive, you see no sidewalks or bike lanes. Metal scrap heaps and high fences line the way. Large trucks dominate the width of the road. 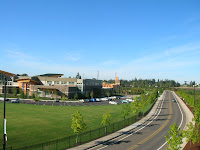 Soon the center comes into view. A bike lane has appeared. But making the left turn into the center is impossible. No cars or trucks pause long enough to make the movement left out of the bike lane safe. Traffic moves at arterial speeds, not residential speeds. And they don't wait for pedestrians or bicycles. Why should they? Are any crosswalks marked? The pavement markings mostly disregard pedestrians. 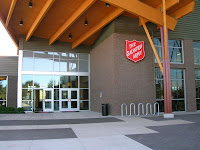 Once you cross the moat and enter the compound, there's tons of bike parking. About half the parking is sheltered, all of it is near entries, and it looks to be well-lit and visible. Except for the wave racking, which is generally discouraged now, the parking looks exemplary. By Salem standards, this is first-class, maybe best in class.

In addition to this rack, there are 4 others spaced around the building. Anywhere that you'd want bike parking, there is bike parking. 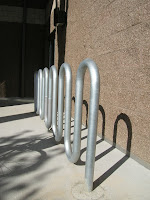 (The one by the weight room looks to be installed a little close to the wall - but I didn't have a tape measure.)

But to what end is all this terrific parking? Who is going to bike there?

One parent I talked to, a member of the Salem Bicycle Club, said that he couldn't imagine biking out here. Even adults, he said, would find it intimidating. Another parent, who had taken her child out to the center a few days ago, also said that she thought traffic was too busy, trucks too big and fast, shoulders too narrow, and road edges too full of glass and metal shards.

Crossing Portland Road is not much better. The approach from this way is slightly better because the bike lane on the right will lead directly to a right turn into the property. Still, few people find biking on Portland Road pleasant, and parents will not send their children there.

The Kroc Center is glorious, and we should all spend some time celebrating it. But after a bit, the community will need to roll up its sleeves again and figure out how to connect the Kroc to the neighborhoods surrounding it. Until it is no longer an island, the Kroc will be hampered by its isolation and kept from full flower.

From an SJ chat:

As poorly sited and auto-dependent as a facility for children and families is, it should not surprise us they are having difficulties. It would be a struggle in a good economy, but in this one...well, folks should be concerned.
Posted by Salem Breakfast on Bikes at 9:30 AM

Very interesting! I also heard from a swim coach that the locker rooms were set up terribly for use by swim teams. I hope they can figure out ways to work these things out for the best of the community.

I'm a fairly fearless rider and I won't willingly ride out there. And that's not a big problem, I'm not their target market. The big problem is that young people ARE their target market but they built a community center that's only accessible to a favored few in the community, a terrible blunder. The site is all but inaccessible via active transportation modes. If gas remains cheap they may squeak by for a while; once the prices start really rising again, they will rue the location and be leaning even harder on Cherriots to do even more for them.

It is possible to ride your bike to a safe place and then catch Cherriots route 14 to the Kroc Center. All buses have room for 2 bicycles on the front.
Routes 4 (downtown to Keizer Station),Route 15 which goes from Chemeketa College to Keizer Station, and Route 3 (CCC to downtown via Portland Road) also connect with Rt 14. 503.588.2424 for Cherriots customer service for more information.

It's great that the Cherriots redesign includes the new circulator #14. Thanks for dropping that info here.

However, a bus rack holds only two bikes. The bike+bus combo doesn't scale very well, and works only for a single or pair of riders, not a group or even horde of neighborhood kids that might want to go out to the Kroc.

For this solution really to work, the bus would need a trailer or other way to haul larger numbers of bikes.

Here's the map and schedules for cherriots.

@Rebekah, I hope that's an isolated instance. It would be sad if the facility were more showy than functional.

Better we should close the roads near the Kroc Center to cars. People who want to drive can park somewhere along the #14 route and then two of them can catch the bus each run to the Kroc Center. Sound good?