Several interesting things on the City Council agenda for Monday, but none more relevant than the temporary Transit Mall location for Cherriots.

After running into several bouts of opposition, Cherriots and the City are recommending a location on Church Street between Union and Marion NE. 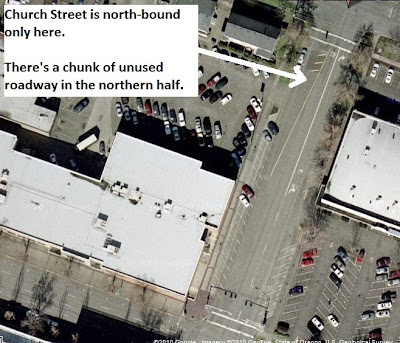 We'll have more on this and the other council agenda items over the weekend.

At first glance, because Church street becomes one-way at Union, with south-bound traffic diverted east or west, Church street has only two north-bound lanes and lots of unused roadway. This looks like a solution that minimally hampers traffic circulation and, again, uses surplus roadway. And, just looking at bikeways, it doesn't impact bike travel much - indeed, it may not affect it at all, since it appears north-bound bike travel would be unaffected.

Look for more later.
Posted by Salem Breakfast on Bikes at 11:00 AM