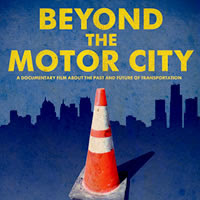 Tonight at 7pm at the Grand Theater, the Salem Progressive Film Series screens Beyond the Motor City, a film about Detroit and its transportation infrastructure.

Before being dubbed the Motor City, Detroit was once home to the nation's most extensive streetcar system. In fact, it was that vast network of streetcars that carried workers to the area's many car factories. And it was the cars made in those factories that would soon displace the streetcars in Detroit — and in every major American city.

Over the last 30 years, much of the world has moved on, choosing faster, cleaner, more modern transportation and leaving America — and Detroit — behind.

Three transportation and development experts will lead a talk after the film. See the series website for complete information.

Salem enjoyed a modest streetcar network in the early 20th century, but it ended in 1927. Some streets today still have rails, and this accounts for the high crown on them.
Posted by Salem Breakfast on Bikes at 7:00 AM