Two Candidates with Salem Ties Run for BTA Board

There's a bunch of candidates for the Board of Directors for the Bicycle Transportation Alliance. Two of them have links to Salem! Cecil works in Salem and Kenji lives in Salem. (For the complete list, see the BikePortland article.) 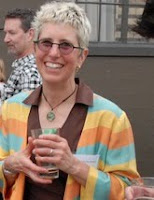 Cecil is a devoted bicyclist and attorney for the State of Oregon whose professional and practical experience with the courts and legislature would add strength to the BTA's legislative agenda. An avid bike commuter and recreational cyclist, Cecil wants to create an environment in which bicycle transportation is the norm, and not the exception. Cecil has served on the boards of directors of Randonneurs USA, REACH Community Development, and Oregon Women Lawyers.

Kenji is the Executive Director of the 4,000 plus member Oregon Bicycle Racing Association. He is a graduate of Dartmouth College and the University of Oregon School of Law, he is also a member of the Oregon State Bar. Originally from Connecticut, he now resides in Salem with his wife Tessa. Not only does Kenji love road bikes, he enjoys mountain biking, track riding and cyclocross. Known for crashing all the time on his mountain bike, he always gets up with a smile. He believes the success of cycling in Oregon can be credited to the wonderful cycling community and efforts of great organizations like the BTA. His love of cycling is evident every time he gets on the bike - he's always grinning when he's on two wheels (which happens to include his motorcycle).

Doug Parrow's term is not up, and he'll remain on the board.

If both Kenji and Cecil are elected, that would give the board three directors with Salem-area ties!
Posted by Salem Breakfast on Bikes at 12:15 PM