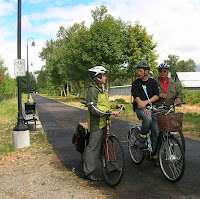 In addition to downtown art and socializing, September's first Wednesday also brought a visit from Marc Schlossberg from the University of Oregon Sustainable Cities Initiative.

The City of Salem is participating in a year long program in which faculty and students collaborate on a number of planning projects. One of the projects centers on downtown parks connectivity. It will involve two classes, "Social Planning and GIS" in the fall, and "Bicycle Planning" in the spring.

Courtney Knox from the City led a conversation with Marc and Vision 2020 Bicycle and Pedestrian Workgroup members on the question of parks connectivity.

The group highlighted a long list of assets and advantages the City and downtown enjoys, and then drilled into an equally long list of challenges and difficulties that hamper efforts fully to realize the value of those assets. 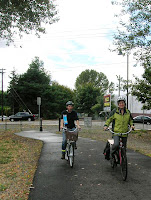 After the meeting, several members went out on a bike tour with Marc to see and comment on the on-road realities.

One of the chief topics were the dead-ends and barriers surrounding the Union Street Railroad Bridge. Here's where the rail right of way, the most intuitive path off the bridge, simply dead-ends into Wallace.

A June 1st, 2008 letter from ODOT makes their position on this quite clear.

...bicycle crossings should not be promoted. As a path connection at this location may instigate future community requests for a marked crosswalk and subsequent features...an at grade pedestrian crossing will not be approved at this location.

The group also talked about the Blind School Parcel and its impacts on park connectivity with Bush Park and the Pringle Creek walkway. 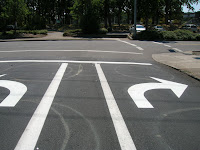 Assuming the Church street is left alone, the group also discussed ways that connections from Bush Park to Church street and especially to Winter street might be improved.

The Sustainable Cities Project will be exciting to watch - and with luck the collective brains will conjure solutions that cut through some of the knots currently binding Salem from effective action!
Posted by Salem Breakfast on Bikes at 11:15 AM