A Happy Divorce: Decoupling Court and State in the Downtown Mobility Study

In the fourth part of our look at the initial concepts for downtown streets (part 1 on Union and Church; part 2 on North Downtown; part 3 on 12th, High, and Cottage) advanced in the Downtown Mobility Study, here are proposed treatments for Court and State Streets.

As State Street comes into downtown from the east, at 13th it is diverted and with Court becomes part of a one-way couplet through downtown.  It has much higher traffic volumes than the other streets.  Additionally, Court street dead-ends in several places with cut-throughs for people on foot.  State Street, on the other hand, is a major east-west arterial through Salem and even out to the hinterlands.

Since State Street is the major connecting throughway, it makes sense for it to have a robust provision for bicycles, and some kind of cycletrack is most appropriate.  This also connects directly with Willamette University, and would make it easier for students and staff to access downtown.

Auto traffic volumes and frequent visitors to the Capitol are such that lesser facilities like bike lanes or sharrows will not be adquate to serve the full range of bicycle users on State Street. A cycletrack or equivalent is the right thing here.

The one piece of the cycletrack that would need to be refined are the potential turning conflicts at intersections.  With the parked cars potentially concealing people on bike from view as they approach and then enter intersections, the prospects of right- and left-hook collisions merit additional study and thought.

Because of Court Street's immediate proximity to Chemeketa, it does not seem necessary to have more than sharrows in the traffic lanes.  I would vote for a slight variation on Alternative 1, then:  Two-way with sharrows. 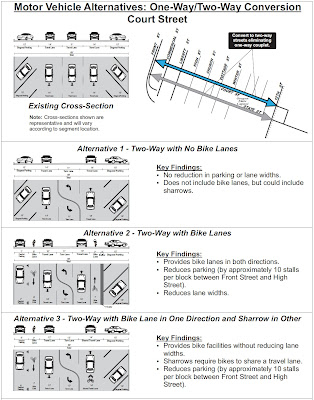 With strong alternative facilities on Chemeketa and State Streets, there doesn't need to be much provision given to Court Street.  But because of State Street's full connection through the City, it merits enhanced bike lane treatment.
Posted by Salem Breakfast on Bikes at 7:00 AM