Historical Bridge Bits: Hippies in Eugene, the Flood of 1861 in Salem

It's a rainy weekend and a sad one.  And on Monday there will be another Council work session on a bridge we don't need.  So how about a pleasanter diversion on less contentious bridges?

In between bong hits and makin' love not war, down in Eugene it turns out the Hippies were partnering with the Man to find creative ways to fund and construct foot and bicycle bridges across the Willamette River.  (How about that!)

In an interesting piece in Salem Weekly, Scott Bassett writes about the ways in the 1970s that Eugene was building out parts of a transportation system rich with choices in mobility.


Moving from Eugene to Salem in 1980 was a shock. I left a city with three bike bridges over the Willamette River and moved to one with none. The difference in mindset between the two was striking then and still is now, when it comes to City and regional leaders’ priorities for transportation projects.

He zeros in particularly on the engineering challenge posed and opportunity created by the nature of the Willamette riverbed.


Eugene’s head start on modern transportation infrastructure thinking and planning might be traced to a lucky coincidence in 1970. Exposed hard bedrock precluded burying a utility pipe under the Willamette River so the City planned to run it over a bridge, then let the county and University build a lane for bicycle and foot traffic over the top. This may have been the Aha! moment that changed the way Eugene viewed its needs and opportunities.

This was the Autzen bridge. 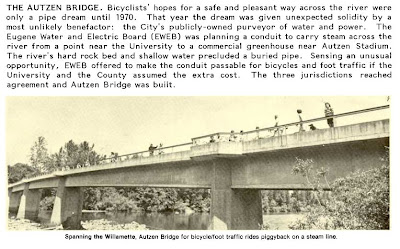 Scott shared some clips from a 1981 publication, "Bicycles in Cities: The Eugene Experience, Volume III, Bridges for Bicycles." 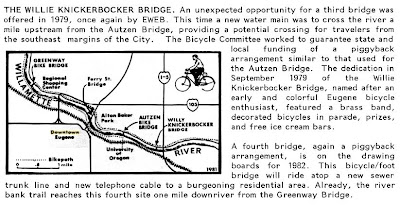 It's a little staggering to think about all this basic infrastructure built a generation (or more!) ago.

Here are the crossings and trail system today. 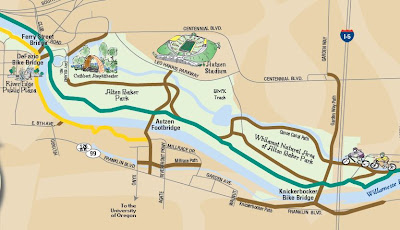 As Bassett notes, the plenitude of crossings should make Salemites jealous! It's true that Willamette is shallower and narrower in Eugene than in Salem, but it sure seems like there ought to be more kinds of creative partnerships that could produce large servings of WIN for multiple parties. If the Hippies can forge partnerships like that, why can't Salemites?  We like to think of ourselves as more pragmatic, but are we really? 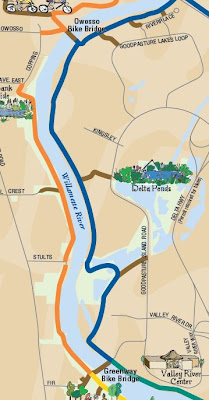 Bridges of course wear out, and it would be interesting now to learn more about the maintenance schedule and expected lifespan of these bridges - will Eugene be able to replace them when it is necessary?

And will Salem be able, as Bassett suggests, to build off the Union Street and Minto bridges and continue to develop innovative and effective connections for people who are not in cars?

The Commercial Street Bridge and the Floods of 1861 and 1890

This summer construction started on a fifth bridge for Commercial Street over Pringle Creek. It's budgeted for a cost of a little over $12 million, and in order not to shut down bridge traffic completely, construction will proceed in two halves, the west side is nearing completion this year and the east half will be done next year.

Can you believe it will be the fifth bridge?!

With the minor flooding earlier this month on the mind, a reader sent a wonderful letter to the editor from 1892, just after the second bridge in this location was demolished. It had cost about $7000!

Mr. Editor: Thinking that some account of the building of the first two bridges over Mill creek, South Salem, would be of some interest to your many readers, I herewith send you a short article In reference to their construction.

The first bridge over South Mill creek on Commercial street, was built in 1856 by Mr. John; was uncovered; had a span of about 100 feet In length; the rest of the structure rested on bents or trestles, extending to the foot of Gaiety Hill; was about four feet lower than the one recently torn down, to be replaced by the Electric car and wagon bridge now in course of construction. It done good service until the night of Dec. 29, 1861, when it was washed out of the stream by the great flood of that date. The writer of this article, Judge Elijah Williams, (the father of Major Geo. Williams the banker, and Hon. Sam. Parker) were probably the last persons to cross the bridge, as they passed on it a moment before It went off, and the planks were just ready to float. Mr. Williams was returning from the residence of S. A. Clark, having his wife and daughter there for safety, as his home on Front street was considered to be in danger of the high water of the Willamette. On the morning of Dec. 3d [sic, clearly it should be the 30th] the flood was at its highest point and a wide body of deep water covered the space from Gaiety Hill to the north bent of Mill creek, and there was no way to reach the city at that time, but luckily an old skiff came floating down the river (the slough was a river then) and was secured by Angus McDonald, and [sic] old Scotch man, employed by Mr. Clark. Some time after the skiff was caught, the overland mail, from Sacramento city to Portland arrived, and was ferried over in the old skiff, together with passengers, and Wells, Fargo & Co.'s express. When the water subsided to the creek the span of the bridge was floated to a convenient spot and secured for a temporary one, until the new one was completed.

The bridge just demolished was commenced early in 1862 and was I think completed in about two mouths. It had a single span of two hundred feet and a weather protector on the south end. The contractors were the late Daniel Clarke and J.H. Hoyden, also dead. The designer and overseer was A. R. Stougton, an old man of 81 or 82, who is now employed by the state under the direction of George Downing, Esq. When the work on the bridge was finished and the false work was being removed it commenced to settle and would have fallen down had not Edward Connor, in the employ of the contractors and who had been a sailor, rigged hugh [huge?] tackle blocks and raised It to its proper level, when bents were put under to bold it up. From that time until torn down it did excellent service and would have been good for several years to come. It cost about $7000 but has fulfilled its mission and will soon be replaced by a more pretentious and in every way a better one for the needs of a large enterprizlng [sic] and growing city.

Before the bridge was completed, hands being scarce, some young men volunteered without pay to help some on the work. I saw one slim young man of about 21 years of age driving pins with a huge sledge. He was named J. H. Haas, now the Jolly rubicund Jeweler on Commercial street. May his shadow never grow less. A keg of beer stood near by furnished by the contractors, but no one drank to excess. Henry Haas only smelled of the mug probably.

Perhaps it would not be out of place to say here that during the height of the flood on the 3d the steamer Onward, Captain Geo. A. Pease arrived from Oregon City and landed a lot of freight on the site of the mill office of the Salem Mills company and on her way up her crew rescued seventy people from the tops of floating houses, logs, etc., and Captain Pease deserves great credit, as he made the trip on purpose to help those in danger.

Another photo of the bridge can be seen here.

There are all kinds of juicy details in this!  The "pretentious" third bridge, the keg of beer, the rising waters in 1861, and Edward Connor's block and tackle.

And it is just fascinating that already there have been four bridges at this location.  Salem has lots of bridges, around 100, over creeks and rivers, and many of them - most of them - will be damaged and demolished in a significant earthquake or epic flooding and will need to be replaced.

In part because of cost, the design of the fifth Commercial Street bridge here will be much plainer than the fourth bridge.  Beauty and charm too should be a consideration, and we are losing some in the replacement. Indirectly in compensation, we will get the path along the "day-lighted" creek.

I suppose the Minto bridge will provide some of the beauty, though I'm not exactly sure the slough is all that picturesque...

Anyway, whether it's neighbors pitching in after the flood of 1861, or synergies in utilities and transportation in the 1970s, it seems like there ought to be a wider range of ways to make connections that serve people, not just cars.

(Thanks to Scott Bassett for sharing the Bridges for Bicycles pamphlet!)
Posted by Salem Breakfast on Bikes at 1:00 PM