Save the Checkermallow; or, How Delta and SeaPort Show Airport Delusion

Following up on airport agenda items from the 3rd, today the paper reports that the City wants to ask for around $5 million for runway expansion in a new round of ConnectOregon funding.

The piece raises a couple of interesting questions.


Unlike Portland, Salem doesn’t have a port or a commercial airport. Trains do rumble throughout the city, but the area hasn’t been successful in securing major funding for railroads....

“Like Olympia, Wash., we’re a capital city that’s in the shadow of another metropolitan area, and we’re just close enough,” said Mark Becktel, Parks and Transportation Services Manager for Salem’s Public Works Department. “They have transit systems that are far more complex and expansive.”

With the largest employer in the city being state government, he said, Salem also doesn’t have large business employers who actively are lobbying for more transportation-related economic development funds — at least compared with more populated cities such as Portland.

It should be obvious that the Portland airport serves the Salem area for many purposes - after all, Delta and SeaPort both were unable to sustain passenger service without enormous subsidy, and it's not clear what commercial purposes actually need a longer runway.

There's a role for some kind of airport in Salem, but it's certainly not as big as many people seem to wish.

Becktel's comment also points to the ways that advocates for rational transportation need to engage business interests.  It's absolutely the case that making it easier for people to take transit, to bike and to walk takes cars off the road and makes for easier frieght delivery.  This is much less costly than building additional road capacity.  But so far we haven't made our case effectively.

The former Executive Director of SEDCOR was making this case almost exactly a year ago, but there's a new Director now, and we don't know how he feels.

And as evidenced by the Chamber of Commerce's sudden mania for the Third Bridge, this "green shoot" for rational transportation policy might have perished. 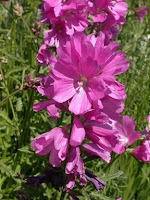 So if it comes down to it, maybe we have to make more noise about the Nelson's Checkermallow.

According to the City's November airport update,


A plant designated as threatened by federal and state authorities—Nelson’s checkermallow—was discovered at the south end of the runway, near the area where a runway extension is planned. This will delay completion of the Environmental Assessment by six to nine months while a mitigation plan is finished.

Fortunately there are other projects. Again from the paper:


But the city will have its share of competition.

In 2011, the Oregon Department of Transportation received 70 applications for funding but only about half of the projects were awarded funds.

According to the Oregonian, Seaport is totally going bust -
http://www.oregonlive.com/business/index.ssf/2016/09/seaport_airlines_to_be_liquida.html

"The airline's bid to reorganize collapsed this month after the airline learned it would lose a key contract and a line of credit helping keep it afloat. A judge on Tuesday ordered the airline's Chapter 11 bankruptcy to be converted to a Chapter 7 liquidation effective at noon on Wednesday."