So now the propaganda war really starts. Debate over the third bridge is going social.

Proponents of the giant highway and bridge have started a blog and facebook page.

The iconography for the Third Bridge Alliance already is fascinating!

The image appears to use a cable-stayed design and engineering motif from the bridges of Santiago Calatrava!  There is a bicycle and foot-bridge in Redding, California, for example.

These are amazing bridges, world-class and beautiful.

That's not what's on the docket for Salem, however.


At best, using imagery from Calatrava and cable-stayed designs like his is wishful thinking; at worst, it could represent a blatant appeal to what is not true.

But the more interesting question is about debate. What is the best way to make and receive argument? Is the social networking just going to engender increasingly loud talking to ourselves? Or will there be ways to engage the facts and to debate different interpretations in opinion?

Alas, increasingly debate everywhere is framed as "trolling."  It's not clear what to do.

For example, already there is difficulty with the matter of traffic counts.

I mean, this is from the Federal Reserve! This is not from "some wackadoodle luddite anti-car, anti-growth lobby." The same pattern exists on the I-5 bridge counts for the Columbia River Crossing and for the Salem River Crossing.

The arguments for the bridges have become notoriously resistant to the facts of these traffic counts, however.  Just ignored.  How to engage this?

Anyway, maybe now the matter of the bridge will get the debate it deserves, even if it's just shouting.  Courthouse Square is a $50 million problem; this is 20x bigger, a $1 billion problem.


To Members of the Salem Area Chamber of Commerce:

At times significant community issues warrant communication to the entire Salem Chamber membership. This is one of those times.

For decades, local elected and community leaders have discussed and deliberated the need for a third vehicular bridge over the Willamette River. The time has come for advocates of a third bridge to make their voices heard.

As a member of the Salem Chamber, you count on us to keep a pulse on business and community issues. Today marks the beginning of a community wide campaign for advocates of a third bridge.

A third bridge across the Willamette River is a necessary component for our regional economy. The Salem MSA represents the second largest population base in the state with over 390,000 people residing in Marion and Polk counties as of the 2010 census. The trends for population growth clearly show the region growing with increased market demand for housing and business activity. Vision planning for the future of our regional economy is absolutely crucial for the sake of our children and grandchildren.

We hope you will take a few minutes to join the Third Bridge Alliance today by taking action through the options below. Be a part of this important effort and utilize the following tools as a champion for this project.

Email Salem City Council and share a personal story on why a Third Bridge is so important:
citycouncil@cityofsalem.net

Attend the upcoming City Council Work Session with me on Monday, December 17 at 5:30pm in the Anderson Room at Salem's Public Library.

Your voice is needed starting today so stand up strong for our region's economy and say yes to improvements in infrastructure that will improve public safety, increase commerce, reduce traffic congestion, and heighten the quality of life for the communities of Marion and Polk counties for generations to come.

The Chamber today shut down commenting on their blog, deleted all previous comments, and say they want to shift conversation and debate to facebook.  The FB page, however, lacks the long quotes and article reprints which makes an actual debate possible - as opposed to dueling "likes." It'll be interesting to see how this goes. 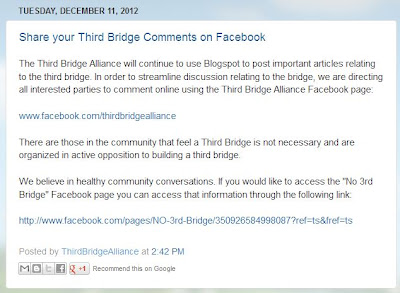 Private advocacy pages are under no obligation to foster free speech and open debate, but it's certainly disappointing to see the Chamber's interest in conversation and open debate closed off so quickly. 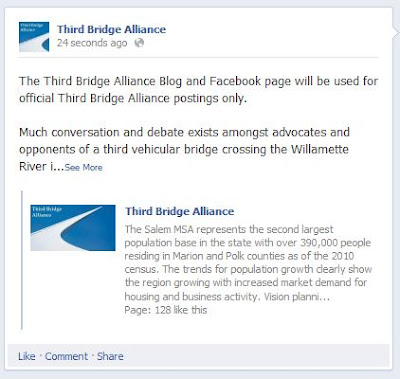 The page admins have been deleting posts by visitors, and it presumably all the dissent and questions will go away. It is a sad reminder of what many are calling "epistemic closure" in political debate and discourse.

At this point it's flogging a dead horse, but perhaps one more note is in order on the nature of epistemic closure.

After all the actual debate was scrubbed on the Chamber's FB pate, No Third Bridge posted a gentle and respectful invitation to debate at their site - but it also was scrubbed.

In the full text of the Chamber's FB post above, they write:


Much conversation and debate exists amongst advocates and opponents of a third vehicular bridge crossing the Willamette River in Salem. If you are a proponent of a third bridge, we encourage you to continue following our official posts on Facebook (www.facebook.com/thirdbridgealliance) and on Blogspot (http://thirdbridgesalem.blogspot.com/).

If you are an opponent to the third bridge, we encourage you to engage in the discussion taking place on the following Facebook page: http://www.facebook.com/pages/NO-3rd-Bridge/350926584998087?ref=ts&fref=ts

For those interested in gathering more factual information about the third bridge effort, all data can be found at: http://salemrivercrossing.org/

It may be a sign of weakness in the Chamber's position, however, that they are not even able to entertain the invitation for actual debate over at the No Third Bridge site.

(It is perhaps also a sign of structural weakness in Facebook, a database system designed with binary logic only to support "likes," and not set up for "dislikes," "disagrees," "not sures," or any other number of shades of opinion that escape the bounds of the binary.)

In any case, whether the full membership of the Chamber agrees on the bridge, its leadership has shown it has no interest in data, debate, inquiry, and conversation.  Facts are not relevant.  The need for the giant bridge and highway is an article of faith, not a reasoned and defensible conclusion.
Posted by Salem Breakfast on Bikes at 12:01 PM

The first post on the TBA blog argues the bridge will help promote a more walkable downtown. The highway to hell is paved with good intentions. In one correspondence Tesler cited this a a reason for supporting a third bridge as well. Perhaps some brokering is going on?

I hope nike's lawyers don't call and demand payment for use of the swoosh....

Watching the "Third Bridge Alliance for Tolls and Higher Taxes" get organized is fun. Their maiden editorial in the SJ "Third Bridge Hits Mid-Valley in the Vitals" is astoundingly content free when you actually sit and read it carefully ... All boosterism and hand waving about the future, no reality-based claims that can be checked whatsoever.

Personally, I think future generations are going to be a lot madder at us for destroying earth's climate stability than they would be for not building an unnecessary giant auto bridge that would only have worsened the problem.

The Chamber scrubbed its blog of comments today but says they welcome comments of all persuasions on their "Third Bridge Alliance" Facebook page so that we can have a "healthy community conversation." Let's do it!

updated again with the Facebook scrub; it is disappointing they're not interested in debate on the merits and facts and other forms of "healthy community discussion."

Again updated on debate and epistemic closure, hopefully for the last time!

The Chamber retreated to their "gated community"!