Last week the Draft 2012 Comprehensive Parks Master Plan came out, and on the surface for bikes it's a mixed bag. Hopefully folks who have been involved or whose primary interest is in Parks can comment more.

For starters, the published draft may not be complete.

One of the maps in which people who bike might have the most interest is not included and doesn't appear to have been published separately. So it's really not possible to get the high-level overview for the Parks system and the way it is envisioned to be part of the Transportation system.

There's also no mechanism for, or a discussion of, a public comment period.  Not sure what's going on here.

The Policy Statements in Chapter 5 look pretty good - though we have seen time and time again how policy statements that look fine in the abstract are watered down drastically by the time they get instantiated in buildable and funded projects.

Still, it's exiting to see the City plant a flag for walking and biking to neighborhood parks:


Pedestrian and bicycle access shall be considered the primary transportation modes for neighborhood parks. For facilities with larger service areas, public transit and automobiles should also provide access. New facilities should be located near transit, when possible, to minimize traffic impacts and provide equitable access by all city residents.

I mean, this is it! This is exactly the balance and priority we wish for in transportation, to make the bicycle a preferred mode for short trips - recognizing that motorized travel, including transit, is preferred for longer trips.

But without a commitment in the Transportation System Plan for this policy and a plan to build it out, it may be just verbage.

The other stuff is nice and all, but not especially exciting.

In its Needs Assessment (Chapter 4), the plan says "the City should not establish a linear park/connector trail level of service at this time." 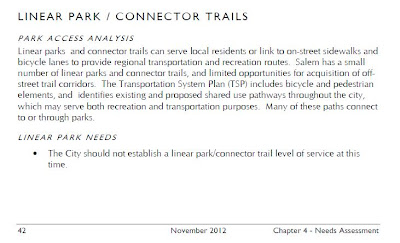 The trail recommendations in Chapter 6 aren't super strong, either.

In general it looks to follow the TSP's lead. I was hoping for a stronger vision of urban trails and connections.  The actual recommendations lack the verve of the policy statements.

On the recreation side, there doesn't appear to be much in the way of bmx, trail, or pump track facilities envisioned.

Hopefully the lacunae will be filled with the proper insertions, and it may be necessary to revisit this.  Maybe there's a grander vision hidden in the materials not yet published to the web.  Or perhaps I have missed something key.

Did you go to the open house or review the draft plan?  If so what struck you?  Is there something else important not mentioned here?
Posted by Salem Breakfast on Bikes at 12:30 PM

As of January 2nd, the Parks plan website says:

The maps are up on the website now. Here's some discussion.