Placemaking in Salem: Before I Die to Speak and Spark in Riverfront Park

Riverfront Park can be a site of great coincidence. You may recall back in 2009 a random encounter with the Family 6tzen as they biked the west coast on holiday from France.

The conversation was a great testimony to cities and the role of chance encounter. (The family is still touring with bikes, by the way!)

Encountering people you hadn't planned on seeing is a huge ingredient for innovation and the intellectual, artistic, and economic life of cities.  Facilitating encounter and exchange is, in fact, one of the roles of a city.

On Sunday the 13th, "Before I Die" will launch under the shelter in Riverfront Park.  It will be a cube built under the shelter and will have a chalkboard mounted on the sides for people to complete the sentence, "Before I die I want to..."  In addition to the solitary act of making public a great personal hope or desire, there will be a social component as strangers meet and perhaps strike up a conversation.

The project uses death to spark life and conversation. In this way it is about community as much as it is about private things.  And in addition to being a project about our individual desires, hopes, dreams - and mortality, "Before I Die" is also an act of placemaking.

The original "Before I Die" wall was installed on an abandoned house in New Orleans.  It reclaimed a dead, maybe even ruined place, for a vibrant sense of life. Where before there was a nothingness, the wall, its visitors, and their desires made a place.

Fortunately Salem has escaped the devastation and depopulation of Detroit or New Orleans.  We don't have many ruins.  But while we have some lovely old buildings, we have fewer lovely new buildings, and a great deficit of lovely urban places where people gather regularly.  We have "places" like the Transit Mall, Peace Plaza, and the Marble Ghetto.  Ugly or empty voids.  Our tremendous 99-foot wide downtown streets are all about cars, cars, cars.

In the spring last year, at a meeting downtown after a tour one visitor wrote:


downtown streets are wide, the lanes are many, and the traffic is aggressive by design. As long as the connective tissue between the historic blocks, the bookend public amenities, and the larger urban renewal area remains oriented to the automobile, Salem’s historic district and larger downtown will inevitably languish and suffer the fate of our shortsighted post-war transportation decisions....

what downtown Salem needs most is something much more obvious: a walkable and calm street network that compliments the textured historic buildings of its historic district. After all, their builders didn't design them to be used and loved from the window of a Prius, but used and loved by shoppers, residents, and tenants (and their wallets). Slowing and narrowing the rivers of traffic lanes will connect the islands of great buildings that today sit there, waiting for the inevitable day when they realize their full potential once again.

At this meeting Curt observed that our "main street" has more lanes than the interstate!  Our car-dependency and car-culture have together made places someplace to move through, rather than places to be. Even when it's most sleepy, in this sense Salem emphasizes movement and becoming, not existence and being. The stream of tweets on the weekend about visiting Portland is a testament to how little people sometimes want to be here.

It might not be surprising, therefore, that the partnership behind the local "Before I Die" is named "Be."  (Be now what you want to become?  Be fully where you are?) 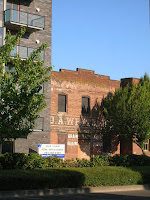 The choice of site for "Before I Die" is interesting.  Just across the street from Riverfront Park is the DA White Seed Company building and the Rivers condominiums. Both are essentially vacant, the one abandoned, the other unsold and unrented.

Including the shell of Boise Cascade, this southwestern corner of downtown is underused, not exactly empty or in ruins, but far from a vibrant part of Salem. The Civic Center empties at 5pm, and is vacant on weekends. Generally there is a void here.

It fails many of the tests for a good place.

During the winter, Riverfront Park is pretty quiet.  The "Before I Die" wall will make it a wintertime destination during its lifespan.  But it will be a destination for driving rather than for walking or biking, I suspect, and I have wondered if using a vacant building might have made for an even more vibrant place. Or perhaps the project will encourage people to think more about non-auto connections across the moat.

As a footnote, it might be appropriate to mention that the architectural critic and historian Ada Louise Huxtable died the other day. She was 91 and it seems had led a full, rich life.

In his appreciation in the New York Times, its current architectural critic, Michael Kimmelman, quoted her about some new branch libraries in New York (the state of the library system in NYC is highly contentious these days - read more at "Steamboats Are Ruining Everything" and Huxtable's final piece in the Wall Street Journal):


These projects are clear, visual demonstrations, which people need in order to understand how a high standard of architectural design and the refusal to go with hack work can have very real and sometimes unanticipated social, human, environmental and neighborhood consequences, often in parts of the city that need it so badly and that we hear so little about.

For Huxtable life was key.  Kimmelman continued with another quote:


When so much seems to conspire to reduce life and feeling to the most deprived and demeaning bottom line, it is more important than ever that we receive that extra dimension of dignity or delight and the elevated sense of self that the art of building can provide through the nature of the places where we live and work. What counts more than style is whether architecture improves our experience of the built world; whether it makes us wonder why we never noticed places in quite this way before.

Salem needs more of both.  "Before I die" will be a lovely contribution.

(This feels like it needs a musical note.  NPR interview with Lambchop's Kurt Wagner about the song.  The record is in part a tribute to Vic Chesnutt.)

Postscript - Candy Chang is the artist and author of the original New Orleans project. She tweets:

Here's the local facebook site. The header image is terrifically ambiguous. It shows the cube in the misty, wintry weather we've been having, set under the shelter like a shrine and pilgrimage site - and absent any people.

And an appreciation of Huxtable and her 1970 note about Portland.

"Huxtable wound down her 1970 Times piece by writing, 'Some day, some American city will discover the Malthusian truth that the greater number of automobiles, the less the city can accommodate them without destroying itself. The downtown that turns itself into a parking lot is spreading its own dissolution. The price for Portland is already alarmingly high. But there are no easy answers, or no American city would be in trouble.'"

Updated with Candy Chang tweet showing the photo used in the header image. She also notices the "quiet."