Marion County has been working to update the 2005 Rural Transportation System Plan. 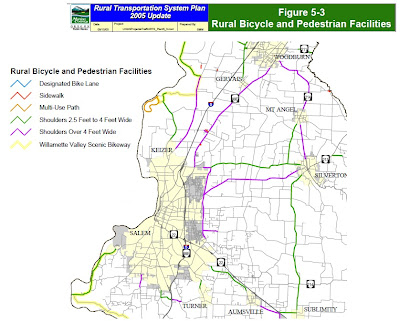 There have been a couple of updates (here and here) and another one is out.

Now you can look at new draft chapters for the rural strategy or the urban strategy.

Bike recreation and bike transport don't get much attention. Mostly it's about paved shoulders.

Indeed, the road inventory they've now posted has no notes on bike lanes!

It's all potential and upside, as they say!

By contrast, you might remember University of Oregon Prof Marc Schlossberg from the Sustainable Cities Initiative gig back in 2010-11.

Since then Marc has taken students to the Netherlands and the SCI program to Springfield.


an evidence-based catalogue of completed street retrofits from around the country that have made conditions better for cyclists, pedestrians, and/or transit users. His team is in the process of collecting a list of candidate streets to include and I hope you can suggest something from your community on this very simple web-form.

The goal of the project is to use already completed projects from around the country and in different contexts as examples to help reduce fear of adopting similar projects in other communities. The print and web-based manual is aimed to be a resource that addresses some initial filters of traffic engineers, transportation planners, policy makers, and community stakeholders, so that community conversations about retrofitting streets can quickly get past the fear of the unknown and move toward action.

They are especially interested in streets with commercial activity or key transportation corridors, rather than bicycle boulevards on neighborhood streets, as they are also interested in the life on the street and the potential of better bicycle and pedestrian designs to spur economic and social activity (perhaps neighborhood retrofits will be a follow up project). They are interested in the full range of retrofits, from fairly simple "just paint" to more high end "signature" projects.

Do you know of a project in your community that was implemented and the world did not end because of it? If so, I hope you can share it with Marc and his team. They can follow up with you individually as well if there is more to the story that you want to share than the on-line form allows.

Sounds great! But does Salem have any candidates? Until the Downtown Mobility Study is finished, and some of its recommendations built, I'm not sure that we really do. What you do think?
Posted by Salem Breakfast on Bikes at 12:30 PM