Salem's really not that big. But as small as it is, it sure seems sometimes like too many conversations remain siloed, and efforts all-too-piecemeal instead of coordinated.

Today's column by Saerom Yoo is a great example. 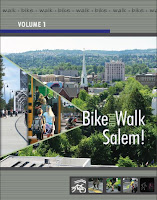 
I live within walking distance of Bush’s Pasture Park, and it happens to be one of my favorite spots for a run or a walk. Crossing two main busy streets, then sometimes using the narrow sidewalk along equally busy Mission Street SE, dodging cars barreling by, was always part of the adventure.

It was strange to hear public health leaders in the community point the area out as a problem that could and should be addressed, instead of a fact of life....

Eventually, PHC will work with the city parks and planning departments to offer suggestions on small and simple changes that could make a big public health impact.

There's a whole lot of "changes that could make a big public health impact" already identified in Bike and Walk Salem!

The intersection of South Liberty and Commercial, for example, has been identified as an intersection needing high-priority attention!

Pioneering Healthy Communities shouldn't feel it needs to reinvent the wheel and generate a whole new project list.  Instead, it should work to mobilize City Staff, Electeds, and public opinion to fund and construct the slate of projects identified in Bike and Walk Salem as well as the Downtown Mobility Study.

The planning studies are done or in motion.  What's needed now is political support and political will!

I'm sure that their hearts are in the right place. However, the fact that they took a driving tour of problem areas for pedestrians and bicyclists makes me wonder how serious they are about identifying and experiencing the issues. A couple of years ago, I offered to take the project team for the 3rd Bridge study on a walking tour of Mission Street to demonstrate that sidewalks don't necessarily equate to pedestrian friendly. So far, there have been no takers.

The work plan is to assess some 20 sites, schools and parks, for connectivity. Hopefully more specific assessment will be on foot and on bike!