Congressman Schrader: Hey Salem, How About Some Sidewalks?

While the goal might have been to ask why the Social Security Office wasn't located downtown and nearer the transit center or other transit hubs, Congressman Schrader's walk along McGilchrist yesterday also highlighted the execrable conditions for walking too often seen in Salem. 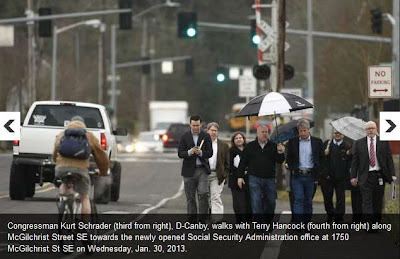 I mean, this is embarrassing, isn't it? Not just for the Administrator who thought the office would be good there, but also for the City.

Tell Congressman Schrader that we don't need more highways! Instead, we need to make sure that a much larger proportion of transportation funding goes to basic transportation infrastructure like sidewalks and bike lanes, things that serve all people, including those on fixed incomes and who may not be able to afford a car. (Senator Wyden's Salem staffer Fritz Graham is also in the pictures, and you might contact Senator Wyden's office, too!)

Equally, make sure your City Councilor knows about Congressman Schrader's visit. Ask them to start moving on the recommendations in Bike and Walk Salem!

He proposes that the SSA should reuse the old First National Bank building designed by Pietro Belluschi!

(Some of the html is a little dodgy here, so apologies for odd spacing and stuff!)

That can be the next big grassroots movement here in Salem after we stop the coal trains and the Third Bridge. This was a huge mistake. It needs to be undone. It shouldn't cost that much to get out of the lease (not in Federal government terms). A great building they should relocate to would be the old Pietro Belluschi First National Bank building on Liberty St. that is slated for demolition.

We could save a downtown architectural landmark and make the Social Security office accessible (close to the transit mall).

I wonder how the square footage matches up between the two.

Because of the lack of ground floor windows and general boxiness, it was not a modernist piece that really spoke to me, and it didn't seem like it could be converted to retail or housing.

But for a governmental institution? The marble and Littman reliefs are perfect!

(More on Belluschi here for the unfamiliar. There's also a forlorn Belluschi office building at 13th and Center, across from Safeway. These are minor Belluschi, but it sure would be nice to reuse them and save them if a good use could be found!)

Didn't know about the minor B. across from Safeway. Will have to look for that one. There is another major Belluschi across from the reborn State Hospital on Center that is in jeopardy. Regardless of what people think about individual Belluschi buildings he was without a doubt Oregon's greatest architect, and his brand of modernism will only get more and more interesting as time goes on. We went through a period when people hated Victorian buildings and we tore most of them down here in Salem (including our beautiful City Hall). I think modernist buildings are in the same place today. We'll kick ourselves in the future if we tear down any Belluschi buildings.

Speaking of cluster fracks in Salem, try getting off the bus on Commercial next to "Peace Plaza," our little bit of Stalinst architectural beauty, and then walking to a meeting at Cherriots HQ. that's when you discover that pedestrians are so alien to the transportation planners in this city that even the freaking public library has no sidewalks next to a major roadway. You're apparently supposed to cross commercial and use the sidewalk on the west side, but there's no crosswalk in mid-block and no way to get to the intersections otherwise. In other words, screw you, you loser pedestrians, why anchyoo gotta car like a real American?

The best idea for making Salem better: for at least a week every year, every elected and senior staff official (two weeks for those who have anything to do with transportation) in every government in Salem may not drive a motor vehicle or ride in a family vehicle. And at least three days a year all the officials must only leave the house in a scooter or wheelchair, and rely on para transit. My GOD but wouldn't that make a difference!

Yes, the Civic Center is in so many ways a nightmare. And, as your witticism suggests, Walker, in another generation or two, historians will be writing easily about what are now the uncomfortable parallels between American mid-century planning and Soviet planning! There are important differences to be sure, but there's also a real family kinship in high-concept fealty to the "big idea" that misses the significance of finer-grained detail.

It's like the bike lanes being on the right side of the street - but the library and Civic Center are on the left side in the Liberty/Commercial couplet!

Breitenbush Hall, the Belluschi at the State Hospital Jim references, is indeed at risk. You can read more about the early planning here. At the December Historic Landmarks Commission meeting, it came out that things were accelerating, including the prospect of demolition. There may have been more at the January meeting, which I did not attend.

Hopefully at least some of those buildings can be reused in a redevelopment. It would be a shame to demolish all of them, especially the Lazarus "Dome" building of 1909/10 and the mid-century Belluschi.

(Even though the Bank is a Belluschi, it really is not at all friendly to the street. Just look at the piture! Not only does it not greet the sidewalk, it essentially turns its back on the sidewalk and frostily ignores it. For me this is a near fatal flaw that no amount of architectural pedigree can salvage. At the same time, as Jim points out, the present imposes blinders on us all, and we should not be quick to dismiss something because it is unattractive to current taste. Fashion is all too changeable!)

Oops! Wasn't using javascript this morning - and not only does blogger require it, it looks like you're signed in and then shunts the comment off to the spam folder as "anon" since it has links.

He hits so many of the right notes!