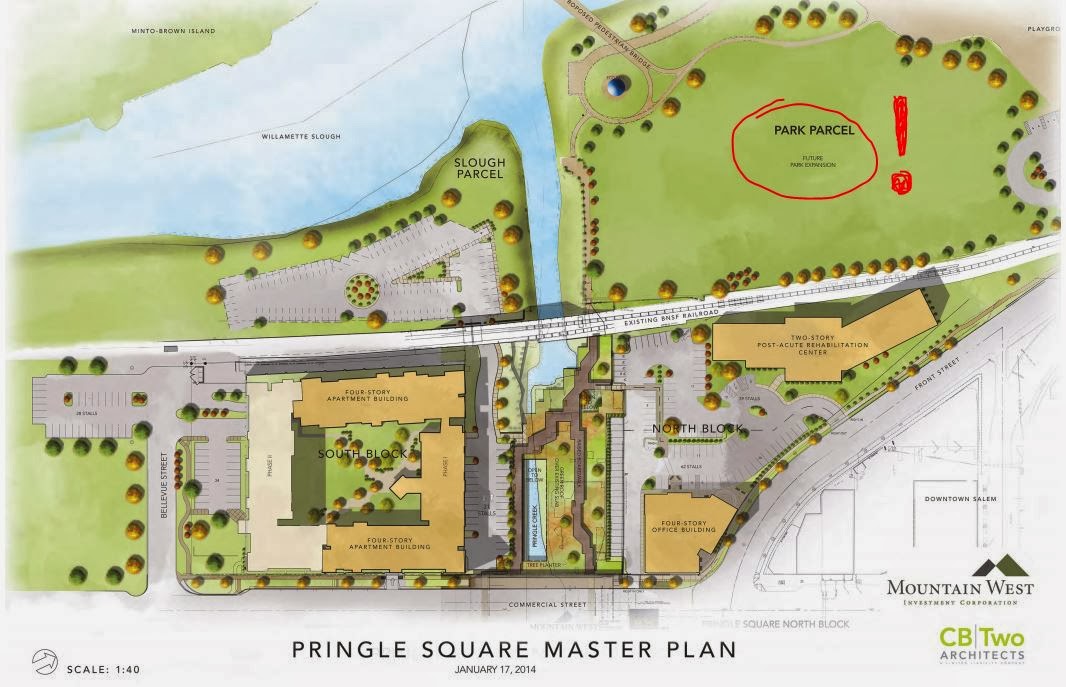 In a not entirely surprising move, the City and Mountain West jointly announced today an agreement for the City to buy the "Park Parcel" and for the rest of the development to move forward.

Though unremarked on in the initial note in the SJ, the path connection from the Civic Center to the Slough appears to be a boardwalk and to use the concrete slab and opening to creek below already in place.


The elevations of the deck and brand-new path don't exactly line up, so this transition - and the need for the grade to be gradual and ADA compatible - will be a detail to learn more about.

Anyway, it is exciting to see the project move finally again, and if there might be questions about details, it is good to see movement on the big picture.

It sounds like there will be action at Council on Monday, so there will be more to say after the staff report comes out. Presumably also other details will emerge.

Lots to talk about!
Posted by Salem Breakfast on Bikes at 3:30 PM

I'm glad to hear that my idea for the river side of the RR tracks has been adopted. The land on the Boise property and the underutilized lots further south on Commercial St offer ample room for development and infill. The river side should never have been considered for development. I would recommend that the concrete walls alongside Pringle Creek be removed and the riparian area be restored. Who want's to walk along an industrial canal even if it's not too long.

I also think that the City needs to build more recreational facilities here. maybe an ice rink/roller rink and some basketball courts.

All good thought, Mike! Now on to a good public process for getting input on what the community would like to see here.

One suggestion I liked was to have some sort of electrical (maybe even some shelters) for possible venders at events.

Wouldn't it be cool to see food carts, kite sales, or bike rentals in the Park?

The idea of having the City buy the property west of the railroad tracks has been suggested by a number of people. Let's all take ownership of it! And feel prioud that, by stopping the ill-advised original Pringle Square plan, we now have a much better alternative.

For example, back in September I blogged about "A new vision for Salem's old Boise Cascade property." I shared a letter that Jack Bushek of West Salem had sent to the newspapers, Mayor, City Council. and others.

We now have an opportunity to get it right--about the Boise-Cascade property development--with a plan that would benefit all Citizens.

What would really enhance this property and make it a centerpiece for downtown activity would be to expand our treasured Riverfront Park. And there is a natural and simple boundary for this: (Look at a map or aerial view)-- the Railroad!

The city needs to take the land west of the Railroad--condemn it if necessary. (We weren't afraid to do that under more dubious circumstances in regard to Straub Middle School). This land would greatly enhance Riverfront Park. And we could add a little more parking as well as plenty of Park!

I have a pet peeve! It is that people seem to think that the City and the Salem-Keizer School District are the same. For the record we need to correct people whenever they make this erroneous assumption.

Now I would love to see all the entities work together better, BUT the reality is that you can't take money from the Minto Brown Bridge and put it toward reducing class size in schools, as someone suggested in today's Statesman Journal, and you can't suggest that the City somehow played a role in using eminent domain to take the Straub land for a school.

Ok, now I got that off my chest!

Yeah to the outcome on the Park expansion. Looks like a win-win for Salem.

Well, we should remember that the Urban Land Institute report folks are so fond of citing did call for two four-story mixed-use blocks on this parcel. This parcel was the piece that offered the best prospect for riverside dining, for example.

I think that a better design could have accommodated residences, an interesting mix of commercial activity, and responded adequately to Carousel concerns about safety for kids.

I fear that the parcel will just become an addition to our hoard of ornamental emptinesses. Riverfront Park doesn't need to be bigger; instead, it needs more users and users spread out in more and different waves of uses, spread out in time and in space.

So Mike's suggestion for things like basketball, skate rink - some activity center beyond just more lawn would be helpful. And totally agree about the riparian area - the more I think about it, the less I like the boardwalk-on-slab concept for the path system.

And rather than more parking, we need to think about making it easier to cross the moat of multi-lane urban highway + RR tracks. Making easy and intuitive connections between downtown and the park needs more thought and investment. More thought on "how" and less on "what."

(And there's still that Nursing Home in the plan for the north block - can't we do better than that? The City should hold out on giving permission for the tax abatement and ask for some better design elements. The selling price for the park parcel looks like an overpay, and if some amount of subsidy is appropriate here, we ought to get better plan and design in return.)

I'm glad development of the Boise site will go forward. I'm sorry that a way could not be worked out to build the apartment complex west of the RR tracks. More people living downtown would help local businesses and enliven the city. Dense residential infill reduces sprawl and enables more walking, biking and public transit use. When the bike/ped bridge to Minto is built, that would be sufficient expansion of the park system, it seems to me. There's a natural segue from on to the other there without need for a bigger Riverfront park

As for vendors in the park, the Carousel store would be a good space for a restaurant or food cart court. What they sell in that store is too saccharine by far (IMO) and only encourages buying frivolous unnecessary stuff. There's a fairly new coffee shop in one of the small buildings on the drive near the A.C. Gilbert Museum, I hope it does well.

I have always liked the juxtaposition of the natural and built environments found in cities, so I don't mind if a remnant of the industrial past remains on the path along the creek. What does bother me is that there is so little discussion of the site clean-up.

I looked into this some a few months ago when the redevelopment plan was a hot topic and from what I remember (please correct me if I'm wrong) Boise cleaned its property up to an industrial re-use standard and then just walked away from further involvement with DEQ. The part of the Boise property on Minto, which the city now owns, remains and will remain in that state and can only be used for a pass-through path to the rest of Minto Island; it cannot be used for recreation. In building Riverfront Park itself, the city capped the polluted sections but did not remediate them. The groundwater cannot be used; toxins are leaching into the river from the park and will continue to do so for several years.

According to EPA, residential re-use requires the highest site remediation standard. I don't know how this compares to the standard the city will need to meet for the new park parcel.