The paper reports today that a new auto dealership is going in at the intersection of Cherry and the Parkway. 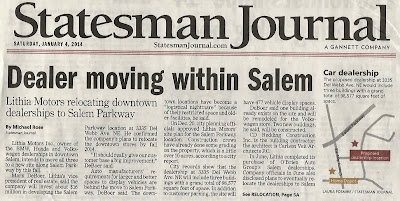 There's all kinds of interesting implications and things to note here!

Let's start with the smallest, but bestest, news!

This was a terrible place for bicycling, and the addition of a car dealership will likely make traffic worse. 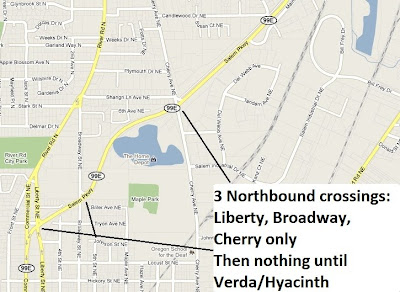 
In August of this year, the City of Salem (together with a contribution from the City of Keizer on a southbound approach) restriped the lanes on two of the crossings and moved the bike lane to the left of the right-turn-only lane.  There's still a tricky merge left with a dashed bike lane, and the crossing is still not suitable for children, but it's definitely an improvement for skilled adults.

You may remember from our spirited conversations about the Police Station that one of the prospective sites analyzed was a car lot.

This summer Lithia Motors purchased the O'Brien dealerships, and with this announcement it is now clear these downtown lots will be available for other uses.

One of the Sustainable Cities Initiative projects was an analysis of mixed-use redevelopment there.  (At this time the City's website is down, so the report, "Development Proposals for Three Targeted Sites in Salem, Oregon," can be found here on the UO site.)

It is difficult to see how this large parcel of four blocks total could be redeveloped at the same time as the Boise and North State Hospital campus parcels.   It seems highly unlikely Salem could absorb a flood of new construction like that.  So the city - not just the government, but all of us - probably has an interest in facilitating a gradual-but-steady development pace that aims for a middle course between boom and bust.

At the same time, with proximity to downtown, the riverfront and creek, the Union St. RR Bridge, and North Broadway, as well as better road connectivity for car travel, this parcel could yield something very fine. This will be exciting to watch.

And we'll close with the biggest and worstest news:  This summer when the purchase of the O'Brien group was announced, it seemed clear that a cluster of car dealerships was forming on the Parkway.  In addition to serving Marion County communities, it seemed obvious that they would like easy access to Polk County communities.  They will be a powerful voice for accelerating a giant bridge and highway across the river.
Posted by Salem Breakfast on Bikes at 11:00 AM

Is there any way to encourage the placement of bike paths in this area that are away from the traffic lanes? The City of Eugene has done this successfully I think in a few areas.

Another place where I would like to see more bike friendly services is around Lancaster Drive. The bike lanes that are on that street are way too dangerous to be used. A lot of low-income people could benefit from having better biking options.

I am not a bike person myself, but I like to encourage as many options as possible. My husband used to like to ride his bike, until he got hit by a car and now his bike is strung up in the garage gathering dust. Such a shame!

Lancaster's a sticky wicket for sure, but the "multi-way boulevard" concept could hold great promise. See this tumblr and a presentation on Eugene concepts(pdf).

But with the fragmented jurisdiction, as well as the fact that it already has bike lanes, Bike and Walk Salem (bike chapter of TSP here) didn't identify Lancaster for any specific corridor improvements, instead putting in the bucket for future study and "potential enhanced bikeways."

Here's the City's SCI page with links to the three sub-reports on the O'Brien parcel.

I'd love to see what appears to be the dealership's overflow parking lot on the west side of High Street between Division and Willow developed to face onto the street. Would go a long way to join downtown and the north Broadway redevelopment area.