Maybe the most famous - or infamous - public housing project is the Pruitt-Igoe project in St. Louis. It was a bunch of towers set on a campus - the model and US template of mid-century urban renewal and Le Corbusier's "Radiant City" concept. (In the Pringle Creek Urban Renewal Area, SAIF and the Civic Center don't, actually, stray very far from this template, either.)

It was utopianism and good intentions run amok.

And of course it failed and was demolished.

Next week, Salem's Planning Commission will look at a proposed remodel/rehab of the Parkway Village apartments of the Salem Housing Authority (hearing notice here).

They are on a much smaller scale and of totally different materials than Pruitt-Igoe.  In many ways they shouldn't be compared.

Additionally, good policy for public housing is far, far beyond our scope here, and if people had mastered it, we'd obviously have a much different state of affairs.

So I just want to comment on a couple of things.


As was pointed out recently, cheap land is often cheap because it's inaccessible.  Parkway Village is right on the Parkway.  Walkscore rates it:  "somewhat walkable."  Its transit score is much worse.  Fortunately there's a Fred Meyer in walking distance, but at a site far from transit centers, bordering an urban highway, and one of Salem's largest industrial areas, it practically enforces car ownership on the residents.  That's a huge chunk of income for insurance, gas, and maintenance!  So if one of the policy goals of public housing is to help people recover earning power, we don't do people any favors by car-dependent development, and the proximity to the Parkway's particulates surely isn't supporting positive health outcomes, either.


Worse, in the "Project Information Form" required by the City, "parking" gets more detailed answers than "crime prevention"!  It may be that we give more attention to storing cars than to keeping people safe, and the answers say something about how much of our care and attention we give to projects like this. 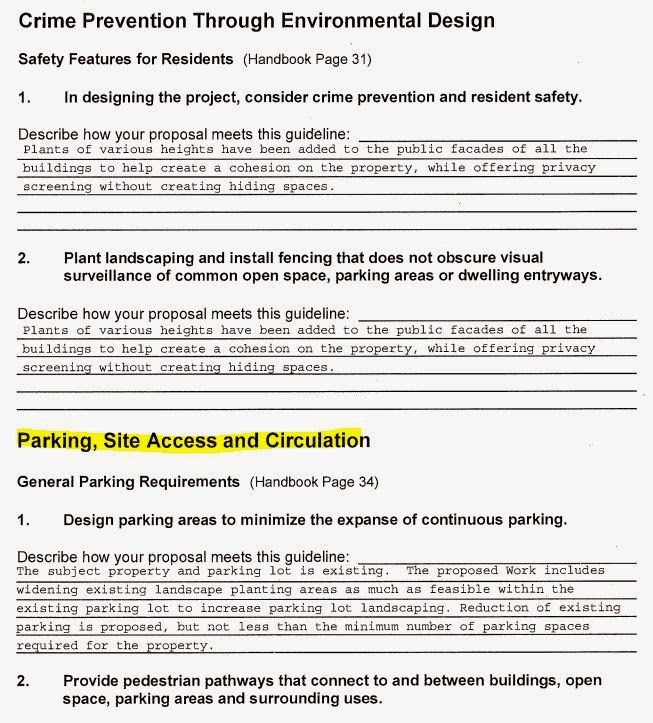 And a section on "common open space" just gets non-answers - a single boilerplate answer for nearly every section.  There's no thought in this. 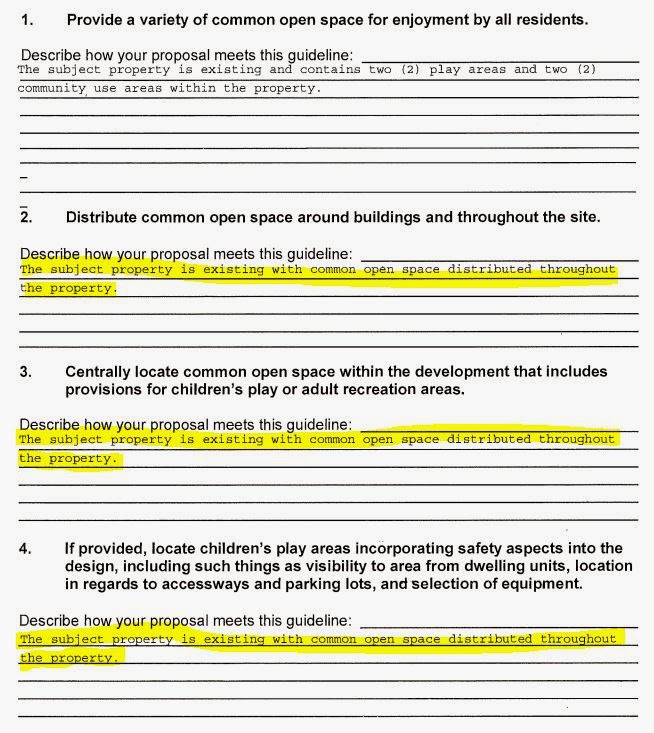 I'm sure there's an insanely inadequate budget for the project.  So I don't know what are realistic expectations for something like this.  (Maybe there are readers who know more about public housing in Salem?)

But at least as far as transportation and walking go, while the project may not rate an outright "F," it's hard to imagine that it's much better than a "D."

The Planning Commission meets Tuesday the 28th and there is no agenda posted yet.
Posted by Salem Breakfast on Bikes at 12:01 PM

This property is zoned RM2 which means a higher density than other RM zones. I was on the committee that wrote the current multifamily design standards and worked on identifying vacant land that was to be re-zoned to RM1 and RM2 back in 1995-97. I do not know if this property was one of the rezoned properties or was an existing property. Since the apartments were built in 1997, it is possible that they were built under the old standards. It is hard to tell from the drawing, but that is my guess. In the current design standards I think there would be more open spaces required with grass. Older apartments had to have play areas like in this complex. We replaed that requirement with grass, because we found that a bit of grass off your patio where a kid could be watched easily was far better than sending them through the parking lot to a site out of your line of vision. Too often these play areas are not used because the parents can't be with an older child and a baby at the same time, or it is dirty or big kids bother the little kids.

Anyway, as to the location, you are right that too often undesirable land is zones for higher density. I fought against the idea of putting a lot of RM land up next to the freeway back then, but lost out.

Another thing that happened back then is that people in West Salem and South Salem opposed a lot of the proposed RM changes, because they did not want to have it near their subdivisions. So, about 200 acres were taken off the books.

Now the State is again telling Salem that they need to zone for more RM zoned land. There is a new committee that is being put together. It is called something like 'Economic Opportunities...somthing" not sure because the City has not advertized it to the public or to neighborhood associations. Not sure who all is going to be on the committee, but my guess that it includes very few people who have actual land use experience.

Anyway, I spoke to someone recently from an agency that was asked to be on the committee and told them of the problem last time. I urged them to hang tough this time and make sure that there is first equal distribution of RM zoned land in all quadrants of Salem and that it not just be marginal land that is selected.

More and more people are living in rented housing. They need to have equal consideration of their life-styles and livability as those that can afford to buy.

Apartments can be well designed and beneficial additions to a neighborhood.

When we wrote the design standards we looked at existing apartment complexes here in Salem that were 'working' and were nice to live in. One of the ones we used was Salem Manor in east Salem at 4100 Market Street. This was an older complex and is run by HUD. What made it desirable was that the open space was all put to the inside of the complex. So, you end up with nice lawns and places where families can gather just outside their back doors. It puts all the parking lots on the perimeter. This way kids and cars have less contact. If you look at the aerial view notice that the apartment complex right next door is built with little green space and the cars are taking up most of the lot. This complex is much harder for kids to live in. Only compensation is that the Swegle Boys and Girls Club is about 400 ft away and they can use Swegle School playground.

My sister lives in a low-income apartment complex in South Salem. I noticed that a huge percentage of the complex is paved, even where there are not cars. As a result you get this hot, dry, dirty area that becomes a no man's land. Kids have no place to play either.

Ironically since it is a low income complex only about a third the residents have cars. This is ok in this location because Winco is just a block away and there is a bus line around the corner.

I think that if an apartment complex is going to be low income and close to transit and shopping, the City should allow for fewer parking spaces and increase the green spaces.

Is it time for inclusionary zoning to become legal in Oregon? Definitely should be allowances on required parking minimums!

Thanks for the historical background on developing the RM standards!

Thanks for the information! It is just another example of the City's poor communication. I chaired the Salem Land Use Network for 22 years. It was made up of all the NA chairpersons. We met once a month and had a staff person who helped us understand what was coming through the system at Planning. But when that staff person retired, the City refused to assign another person and after a few lame meetings, we stopped meeting. Since then LU chairs are becoming less informed and less effective. So have NA in general.

There is a systemic problem at City Hall in how they communicate and how they value citizen input.

Today I stumbled across a video of the Mayor and Clem at a Statesman Journal editorial meeting talking about homelessness in Salem. A real eye opener as to how they see the City from the perspective of the less fortunate.

It is like Dick Hughes wrote a few weeks ago on the issue. He wrote that the City does not do enough to education and get input from the citizens. Citizens, he said, should not have to dig it out from agendas and on line.

This should be double true for those who serve as volunteers on board and commissions and Neighborhood Associations. The Chair person's will meet later this week. I am going to see if anyone has heard of this committee. Rezoning land is a major Neighborhood issue.

You ask about inclusionary zones. As far as I can tell some of the State planning rules do indicate that you have to have enough land available for all housing types and incomes. The definition of affordable housing is not well defined, however. So, if you offer a unit for slightly less than the average prevailing rate, it might be argued that it is affordable...and sometimes is, but it may still not affordable to a lot of people.

Recently listened to a presentation on the issue of homelessness in Salem and one of the admissions by the mayor is that part of the problem is that in Marion and Polk counties there are not enough beds for those individuals who are so poor they can't afford any form of housing and are thus homeless. They say that the current housing can only meet the needs of about 20% of the population in need. The various housing vouchers and other forms of assistance is far from adequate.

So, I would say that a requirement that there be sufficient housing for all segments of the population should include affordable housing for these people as well.

Other communities that have focused on making sure that everyone has housing, find that their costs of other social services are reduced and in the long run they end up saving public dollars.