Yesterday the Oversight Team voted to move the revised "Salem Alternative" forward as the "locally preferred alternative" for additional consideration and analysis in the final Environmental Impact Statement of the Salem River Crossing project. 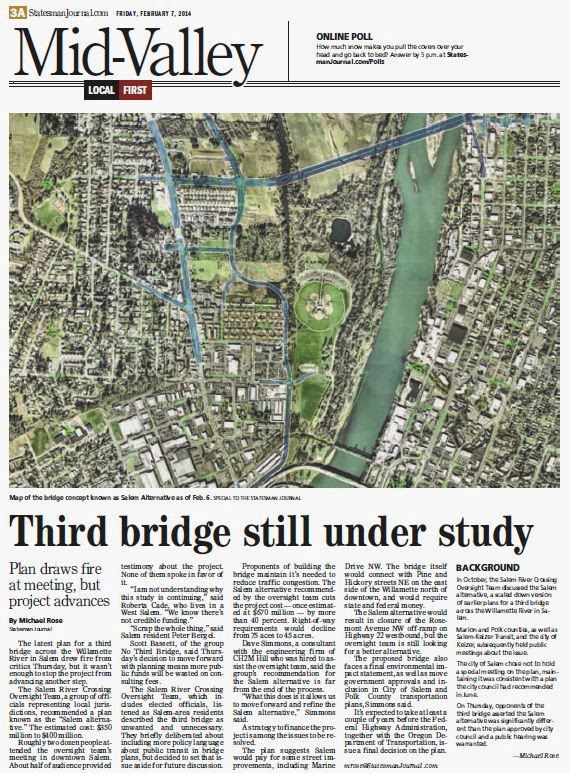 What the heck does that have to do with Monday's City Council meeting?

Perhaps because of the snow and things slowing down at the office, the City posted Council agenda a day early on Thursday!

A little buried in it is an proposal for an update of "the City of Salem Natural Hazards Mitigation Plan."

According to the staff report on the Hazards Mitigation Plan,


The proposed action item...identifies the need to develop transportation policies that emphasize the importance of planning, constructing, and maintaining multiple travel routes to connect critical facilities to the rest of the community (also referred to as "system redundancy")....The need for this action arose from an audit of the City's bridge program requested by [ODOT and FWHA].

The Hospital is located at the confluence of Shelton Ditch and Pringle Creek, and there are numerous small bridges ambulances have to cross to reach Hospital.

Many of these bridges are old.

Many of these old bridges are not in very good shape and have significant deferred maintenance and seismic reinforcement needs.

For the $7 million that has been spent so far planning the "third bridge," we could have totally replaced or seismically reinforced one, two, or maybe even three of these small bridges near the Hospital!

And of course the Marion Street Bridge is "structurally deficient," assessed with a worse rating than the Skagit Bridge that collapsed recently.

This persistence on the fantasy of a third bridge while we ignore urgent existing demands for repair and maintenance is a case of badly misplaced priorities.

We need instead to turn our attention to preserving and maintaining our existing infrastructure, to figuring out ways to better use existing capacity, and to stop building new capacity and new infrastructure we already can't afford to maintain properly.

The process an update to the Natural Hazards Plan envisions could yield amendments to the Transportation System Plan, and could be an opportunity to cast new eyes on our actual needs.

(It shouldn't be necessary to say this, but it's at least possible that the interest in "system redundancy" is not about our local street grid, but is code for "we need a third bridge," about a supposed deficit in regional redundancy rather than a deficit in local redundancy.  But of course if the existing bridges were seismically upgraded, in an emergency, either one or both could handle two-way traffic.)

The City is also moving forward with the amendments to the Transportation System Plan that were shopped at the Neighborhood Associations this fall. Council will likely go with staff recommendation to initiate the amendments and ask for a Public Hearing at the Planning Commission.

You might have seen the demolition work at Triangle and Liberty.  CB|Two is building a sports rehabilitation clinic there, replacing an old service station. The City is going to peel off a thin strip along the road and dedicate it as public right-of-way for a future widening project.  Accumulating these will be necessary if Liberty is ever going to get bike lanes here! 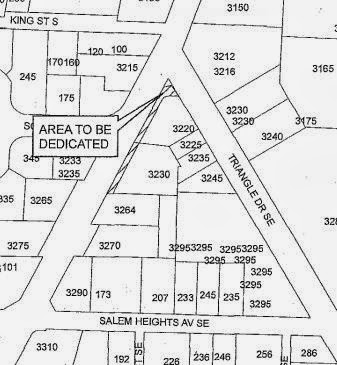 Immediately across the street - and this has nothing whatsoever to do with Council! - is the old Post Office.  Look at that loading dock!

Why isn't this a brewery or something?!  Maybe one of the ones out McGilchrist can graduate to a larger space.

Back to Council agenda, there's also the Urban Renewal Agency audit and the City of Salem audit.  These ought to be meat for a master of the spreadsheet and finance!

Finally, worksessions Monday are a little interesting, too:

Great post SBOB. You are right. We might have been able to retrofit a few of our old bridges in Salem with the discretionary dollars we have instead doled out to a Colorado consulting firm to plan the 3rd bridge. After last Thursday's Oversight Team meeting we are going to spend a couple million more. The members of the team admitted on Thursday that the potential for state and federal funds was minimal (maybe 10% of the project) and that property tax funding was problematic because of compression and other issues. Where does that leave us. It leaves us with tolling the existing bridges! And amazingly, Commissioner Brentano came out in favor of that. He should be glad he is not running for reelection this year.

Too bad we can't vote Fernandez et al out of office!