Monday's Council agenda is light from our perspective, but we can lead with good news! City Parks and the Salem Area Trail Alliance will present an information report on the proposed bike park concept for north of the ballfields at Wallace Marine Park.

The proposed giant bridge and highway is nearby, but I don't know how directly relevant is the proposed alignment for Marine Drive and the bridge.  There's an established tradition of using skate/bmx parks to fill the "spandrels" underneath bridges with licit recreational activity as a way to diminish homeless encampments, drug-dealing, and other illegal or unwanted forms of vagrancy. In many ways the proposed park fits in this tradition.

Still, Marine Drive would be another barrier between West Salem neighborhoods and the park, and kids will be darting across the road. Even if the bridge is not built, I am doubtful about Marine Drive as a stand-alone expressway.

Apart from these questions, the facility would be a great addition to Wallace Park, and the Parks and Recreation Advisory Board has unanimously endorsed the concept and City Staff find it complies with the Master Plan for Wallace.

(However! There are no funds and park would be privately funded, so SATA is working on that part. Breaking ground is a ways off yet.)

It is interesting that there's also a proposal for more public art, and so far Salem has used public art in similar ways:  To attempt to activate poorly designed or configured spaces.

The most notable example is the ornamental emptiness sculpture garden at Trade and Commercial.  One crosswalk is closed because of dual turn lanes, and the corner is bounded by an urban State Highway and a major arterial.  Who the heck wants to walk there!

It's going to get better with the apartments at Boise and the new path along Pringle Creek with the crossing under the new Commercial Street bridge.  And maybe I'll change my tune once all those pieces come together - I mean, I want to change my tune!

In the meantime, the sculpture garden is a pretty feeble attempt to enliven a dead public space and corner.  It functions only as patio for the Conference Center, and not as a city plaza.

The Public Arts Commission and Urban Renewal Agency propose to purchase and install some new sculpture around downtown.  The locations are to be determined - and I hope that rather than trying to salvage spaces that aren't working, the City will instead "pick its winners" and leverage existing spaces that are working or have promise.  Make ok spaces good instead of trying to make bad spaces maybe ok. But I am doubtful that those who will make the decision actually spend very much time walking around.  So many of the decisions look like ones made from a map and from the car.

A short list of candidates for the Planning Commission looks to move on to the next step of interviews.  One is a member of the Historic Landmarks Commission, and another, maybe the most interesting candidate, works for the Department of Administrative Services as a Planner and has worked a good deal already on the North State Hospital campus.  I guess there's already a State employee on the Commission, and maybe two would be superfluous, but if we need to coordinate stuff better with the State as the North Campus is redeveloped and as the Capitol is closed for the seismic retrofit, it might be helpful to have another, especially one with connections to DAS. This decision will be interesting!

A likely contentious matter, the downtown Economic Improvement District is up for renewal (report here, renewal ordinance here).  After canning the Salem Downtown Partnership, the City took over, and there will doubtless be a strong critique of the City's efforts from some quarters. It will be interesting to hear if there is a significant body of downtown businesses who favor the City's own administration.  In the report, they have a map of "Block Captains," which was a program I hadn't heard of before. I have no opinion on this, but things that work or don't work in downtown are always of interest.

Not on Council agenda, but I got to jam it in somehow...it looks like the paper's going to have a Sunday pro-CRC editorial.

Washington State has indicated they're out, so an Oregon-alone project really amplifies the risk, and in fact the Treasurer was uncomfortable enough that the current bill concept in the Ways and Means Committee was rewritten to take the Treasurer out of the approvals loop in some key ways.

It's a bum deal and a sham, and if local business thinks the lack of a new bridge is "choking" our exporting ability, just wait until they see they way it chokes ODOT's ability to fund anything else!

It's not complicated:  We can use our limited resources to preserve and maintain our existing capacity, and we can develop programming to use that capacity better, more efficiently, and more wisely.

Or we can blow a ginormous wad on a new super-sized bridge and a whole bunch of highway interchanges and not be able to afford pretty much anything else - you know, things like seismic retrofits of old bridges that emergency personnel might need to cross after the big earthquake. Talk about shooting yourself in the foot!

For some of the latest, see the Oregonian on doubts from Senators Courtney and Starr and Evan Manvel on the likelihood of giant cost-overruns.  1000 Friends of Oregon has an analysis out as well.

(And, again, so many of the issues are cognate with our own Salem River Crossing.) 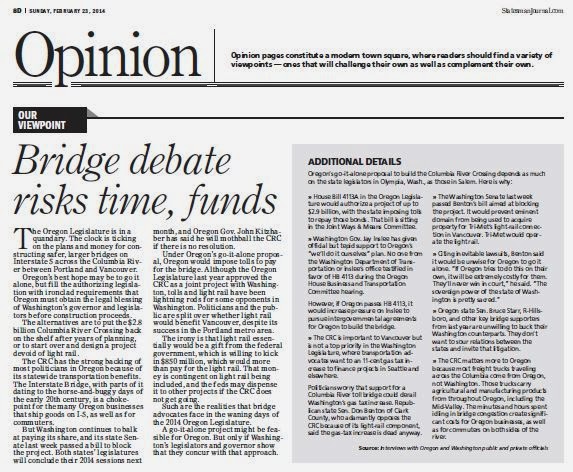 It doesn't have to be bits of sculpture plopped down in otherwise barren corners.