The Minto Bridge would have Closed this Weekend

Minto Park was inundated during our big January 2012 flood, and it was affected by high water throughout much of that spring.

The City of Salem has closed two Salem Parks due to Willamette River levels.

Both parks will remain closed until the Willamette River returns to normal levels.

Clearly flooding and high water will affect the Minto Bridge, and we've never really had a good answer about this. The City purports to answer it in the Minto bridge FAQ (July 9, 2013):


I am concerned about flooding of the Bridge and Trail. How is this being addressed in the design?
Bridge - The tied arch bridge concept assumes constructing a bridge one foot above the 100-year flood elevation, so flooding is not expected except in significant storm events exceeding the 100-year event. The Bridge and Bridge landings are being designed to guard against damage from erosion during flood events. Increasing the height of the Bridge increases the length of the Bridge and cost of construction, without an identified benefit. Managing the costs to maximize value is a key objective in the delivery of the project.

Trail – The Trail will be located on the top of an existing berm on Minto Island. The edges of the paved Trail surface will be thickened, reducing the likelihood that flood flows will damage the Trail. The area of the planned Trail remained above high water in the January, 2012 flood event. Connecting trails in Minto Brown Island Park do flood, but alternate routes located above the 100-year flood elevation are available.

However! As we can see, the park is often closed well below the 100-year flood elevation!  It is not very meaningful - or is perversely meaningful - to suggest that "alternate routes" are available when the whole park is closed.

An equally relevant question may be, not just what is the risk of the bridge or path system being wiped out or damaged, but how often will we be unable to use the bridge and path system? 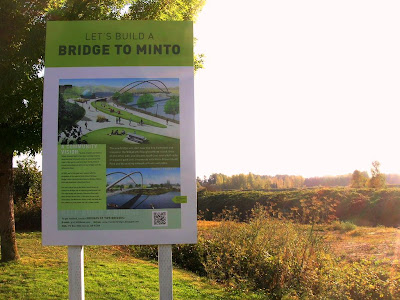 
Informal conversation with City Staff have suggested they felt that path flooding really kicked in at the threshold of 19 feet.

In the City's press release this time, they reference car driving and car parking begin impacted at 24 feet, and it wouldn't be surprising that walking or biking are impacted at lower water levels, like 19 feet.  It probably depends on how saturated and fast- or slow-draining are the soils:  I bet the elevation at which there is impact is higher earlier in the season when the soils are less saturated and can drain faster or absorb more; since we've had an extraordinarily dry winter, Minto may be closing at higher levels than it did in the much wetter seasons at both ends of 2012.

At this point with funding all but sewn up, it's mostly moot when bridge will close.  It doesn't really matter that we might be able to use the path and bridge only 10 or 11 months out of the year.  The only way in which this really matters is the extent to which the City continues to position the Minto Bridge and path system as a key commuting corridor.  In some funding applications they found a herd of unicorns: Up to 27,000 non-auto commuters who could use the route for commuting. (See, no matter what kind of bridge it is, you can be sure the City will have some kind of crazy traffic projections!) But of course it doesn't connect jobs, homes, and storefronts in any meaningful way.  It's a park.

And because of rain, dark, and flooding, it is not a reliable route. Only unicorns will use it for commuting!

Again, at this point, it's not really that big a deal that the bridge won't be available for all 52 weeks each year, but it's not something the City has been good about acknowledging, and it would be nice for Citizens to have a realistic expectation for how often they won't be able to use it.

A visit to Minto Park this weekend turned up a surprising amount of trail closure!

And it turns out the reason behind the strange veer of the "preferred route" in Minto Park to hook up with the new bridge is because it follows some of the highest ground in the park.

But the route is also along an abandoned gravel road, and because of the new conservation easement, it is not clear that this route will be able to be paved one day. In fact, the official park map doesn't include it in the list of designated paths.

So it's a "preferred" route, not because of the quality of width of the path surface, but because it's least likely to be flooded!

(Information on the conservation easement here, and park map and other park information here.)

After a summer of exceedingly low water, we are now getting a much wetter than usual December.

The NOAA is forecasting a crest of about 25 feet on the 18th/19th and high water for several days afterwards.
Posted by Salem Breakfast on Bikes at 7:00 AM

"Good comment. Even when you like what they're doing, it's a little disconcerting to see how much reality they're willing to overlook once they've decided on the goal. Ultimately one has to conclude that the mode of operation around here is one characteristic of tightly held small businesses, where only a few key players need to be brought along and buy in; once that happens, they brook no dissent and expect the proles to fall in line."

They also reported that trying to comment on an iPad wasn't working. Any other readers having issues with commenting, especially from phones, tablets, or other mobile devices?

The paper reports the park opened this morning, though it is not clear all the trails are usable:

"Wallace Marine and Minto Brown Island parks were opened to the public at 8 a.m. this morning following more than a week of closure.

Randy Funke, parks operations supervisor for the City of Salem, said the river dropped to an acceptable level and the standing water drained enough to allow the opening.

“Some of the trails are still going to be flooded and there is some small debris, but both parks are open and ready to go,” Funke said. “This is something that happens this time of year, it wasn’t unusual.”"

Thanks, anon, for the update!

This weekend, many trails in the park were closed. I'm guessing that's still closed, but I don't know that.

Elevation and water levels also disclosed something about the reasons behind the bizarre "preferred" route to the bridge.

Updated with new river level chart and closure signs - at about 18 feet, and perhaps first posted at an even lower level.

"Due to projected Willamette River levels later today, the City of Salem has closed Minto-Brown Island and Wallace Marine Parks.

Based on NOAA projections, the two parks will begin to flood by midday today (Friday). The parks were closed at 5:30 a.m. Friday."