Well, this is interesting!

At 6:00 p.m. on Friday, February 21st, a documentary about Portland's Critical Mass rides and their legacy will play the Mid-Valley Video Festival at Northern Lights Theatre Pub. Admission is $3. 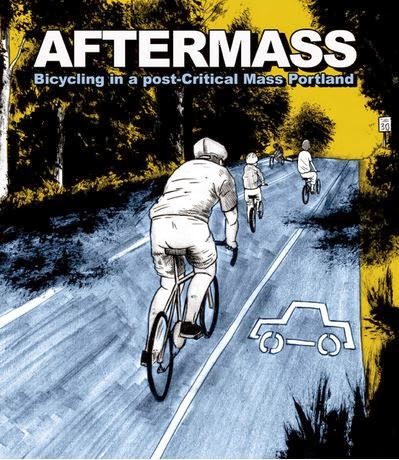 In the announcement, festival organizers suggest there might have been a Friday afternoon Critical Mass ride in Salem in the 90s.

Anyone know about this? I have never heard of anything - no rumors in advocacy or club circles. But that doesn't mean that some intrepid folks might not have gone out occasionally!

If there was a meaningful history of Critical Mass in Salem, that would be good history to retrieve!

On the other hand, it could just be a juicy bit of apocrypha or hype.

In any case, even if there was a small ride, the clear answer about a legacy and its influence is "no."  The Bike Club and bike shops were far more instrumental in that regard, as have been ODOT and City employees who biked.  It's about the Monster Cookie and things like that!  Salem's bike culture, such as it is, has grown mostly as a mainstream thing, not as an underground.

And certainly, from today's standpoint, Critical Mass has seemed unnecessarily antagonistic, a form of protest less effective than affective, and it is hard to see any form of Critical Mass as playing a meaningful role in developing bicycling in Salem.


Aftermass—charlieCM from Microcosm Publishing on Vimeo.

The film, Aftermass, just came out last fall, and was apparently well-received in Eugene, where it debuted in November.

It will make an excellent pairing with Gil Penalosa's Wednesday talk and Salem's incipient focus on Sunday Parkways, which are not exactly an anti-Critical Mass, but nonetheless offer a more inclusive - and more incremental - approach to change.

(If you go, Northern Lights is not well served with bike parking, and of course it is on one of our not-so-bike-friendly giant stroads.  Plan appropriately!)
Posted by Salem Breakfast on Bikes at 10:00 AM

Sure enough, 20 years ago, there were Critical Mass rides in downtown Salem during 93-94. Hard to say how much influence they actually had but somebody was doing something. To downplay or suggest the issue is hype devalues their efforts.
"Aftermass" interviews participants from different factions and their objectives in Portland.
Maybe the film will spur action like the festival's 2010 premiere of "The Chicken Revolution" that revived the backyard chicken efforts and resulted in new policy?
Regardless, it's a fun film to watch and you'll be able to grill the director.